Adam Nessel  —  @AdamNessel Jul 26th, 2018
Share on Facebook Share on Twitter
A high-level quarterback on a good team, Philip Rivers is a dark horse MVP candidate. Which other guys with longshot odds could bring home the award this season?

Folks, we have officially kicked off training camps, and we're now roughly six weeks away from the NFL regular season.

It is the perfect time to take a look into some future bets, as Vegas has listed many different season-long prop bets.

The MVP award always presents interesting odds. We all know who the obvious betting favorites are -- Aaron Rodgers (+550) and Tom Brady (+800) -- but which longshots could get in the MVP mix?

Let's see which guys with odds at 20/1 or higher could put together MVP seasons in 2018.

Before we try to determine some value MVP candidates for this season, let's take a trip down MVP Award winning history. 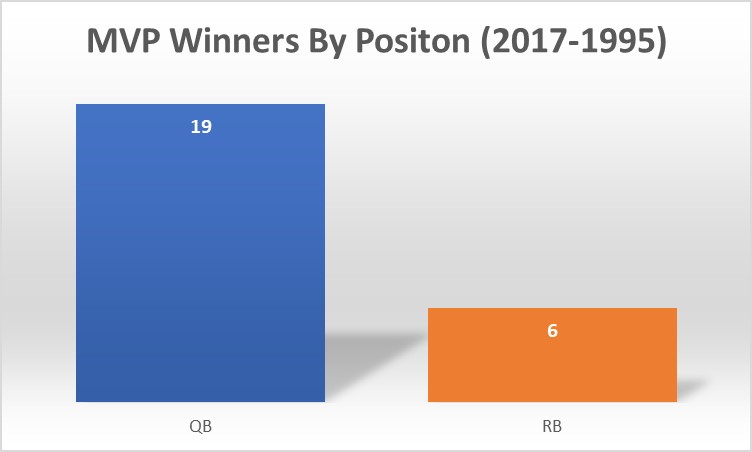 Over the last 25 years, there have only been two different positions -- quarterback and running back -- that have taken home the league's most prestigious individual award.

Quarterbacks have won 76% of MVP awards over that span, which makes sense considering signal callers impact the game more than anyone else. Typically, in the seasons in which a running back won MVP, they topped 2,000 total yards from scrimmage and/or scored more 20 total touchdowns.

Another trend from the past 25 winners is the team win totals for the MVP's squad. 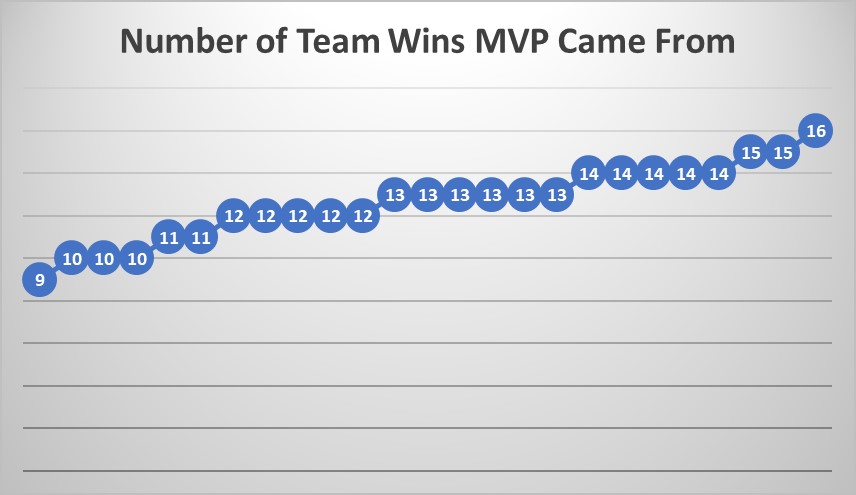 In that stretch, 96% of teams that had an MVP, won 10 or more games in that sead, and the average team win total of the award winner was 12.6. Even if a player's output is absolutely monstrous, if his team does not post double-digit wins, then there is no realistic shot of taking home the award, based on history.

With this information in mind, let's take a look at a few guys to consider as sleepers in the 2018 MVP Race.

Quarterbacks on teams with high win totals are the best bets to win the NFL MVP award, and Kirk Cousins fits that mold.

He steps in to the best opportunity of his career as the new Minnesota Vikings' signal caller, and he will be equipped with playmakers at all positions -- Stefon Diggs, Adam Thielen, Dalvin Cook, and Kyle Rudolph. That supporting cast helped catapult career journeyman, Case Keenum, into a career-best campaign last season as he totaled 3,547 passing yards and 22 touchdowns.

In 2017, the Vikings checked in fifth in offensive efficiency, per Football Outsiders, and they boasted the third-ranked passing offense.

Currently, the Vikings have a projected team win total of 10 games, per Bovada, with the juice on the over at -130. Our models at numberFire rank them as 2018's second-best team. Coming off a 13-win season in 2017 with basically the identical roster construction besides the upgrade from Keenum to Cousins, it is hard to see the Vikes going under 10 wins unless they face a case of the injury bug.

Diving into Cousins a little deeper, he has thrown for more than 4,000 passing yards and at least 25 touchdowns in three straight seasons. While people visualize Cousins as a guy who throws a high amount of interceptions, he has averaged 12 per season over the last three years, the only three years he's been a full-time starter.

Below is a table that reflects the averages of 19 quarterback MVP winners from 1995 to 2017, and those numbers are compared to Cousins' three-year averages as a starter in the NFL.

As the numbers show, the majority of Cousins statistical outputs have lined up pretty closely with previous MVP winners, besides the touchdown totals.

With playmakers all over the Minnesota offense and being a part of a Super Bowl-caliber team, Cousins looks poised to improve on his numbers and potentially get into the MVP race. At his current 22/1 odds, he presents strong value.


Philip Rivers is entering his 15th season in the NFL with arguably one of his best teams yet. The Los Angeles Chargers are poised for big things in 2018, and they currently sit with a 9.5 projected win total. Our models peg them for the sixth-most wins (9.4).

It is their defense that everyone is falling in love with, and rightfully so as they boost the second-ranked secondary, according to Pro Football Focus, and they tied for fifth last season with 43 sacks. The unit should help Rivers at least get close to the magic number of 10 wins.

While the loss of Hunter Henry hurts Rivers' ceiling, Rivers has overcome injuries to his teammates before. In his last 10 seasons, he has averaged 4,366 passing yards and 29.8 touchdowns while completing 65.7% of his passes. Those numbers compare pretty favorably with the numbers of recent quarterback MVP winners (above), though he'd likely need a little good luck in the touchdown department.

An argument against Rivers would be his high interception totals, but he has attempted 525 or more passes in eight straight seasons, consistently putting him in the top 10 of the league in pass attempts. Over his career, he has posted a 2.6% interception rate, which puts him in the same company as former league MVP winners Peyton Manning, Steve Young, and Joe Montana.

As the Bolts look to take the next step in 2018, Rivers will be the man leading the charge. At 28/1 odds, Rivers makes a lot of sense as a wise longshot bet.

It takes a truly special season for a running back to take home the MVP honors. There have been six backs who have won the MVP over the last 25 years, and here is a chart of those magical seasons.


All of these represent world-class talent at the position. In all six years, those backs lead their teams to the playoffs. Five of the six backs racked up at least 2,000 total scrimmage yards, and all of them scored more than than 12 total touchdowns.

Le'Veon Bell enters a contract year, one where he plans to skip training camp but will be all systems go for the regular season. We saw a similar situation for Bell last year, and the Steelers still gave him 406 touches, which out-touches all but one of the previous running back MVP winners.

We should expect the Steelers to feed Bell again this season, especially since it seems like Bell will be hitting the open market after this year. With an astronomical amount of touches, Bell should be in for a massive season as he has averaged 5.1 yards per touch throughout his career.

The Pittsburgh Steelers come in with the second-highest win total projection of 10.5 games, per Bovada, behind only the New England Patriots, which checks one of the boxes for a running back to be considered a real MVP candidate.

For Bell, the downside has always been his touchdown totals as he has never scored more than 11 touchdowns in a season. Below is a chart of the last three years in which Bell has played at least 12 games. Let's take a look at his red-zone opportunities. (these numbers were pulled from NFLsavant.com.)

As the numbers show, his lack of scoring is not for a lack of red-zone volume, but rather he seems to be on the wrong side of touchdown variance. At some point, that could easily flip, and Bell could rack up a big touchdown total. If that occurs in 2018, Bell could be right in the thick of the MVP race.

Bell does it all on the field and is a primer back in the league. With the Steelers expected to be one of the league's best teams and Bell likely to see insane volume, he's a solid dart throw at 40/1 odds.