The Most Important Position to an NBA Championship Team, Part 2: Opportunity Cost

Last Wednesday, I wrote an article about positional values in the NBA. In it, I looked at all the past championship teams since 1990 â€“ roughly 25 years of data â€“ to see if there were trends of production by position on these best teams. The data was quite interesting, as all the positions produced, more or less, at the same rate except for the point guard spot, which was about 1.5 to 2 times less productive.

One point I made was that it wasnâ€™t necessarily about the point guards themselves. Itâ€™s not like Chris Paul or Russell Westbrook arenâ€™t good enough to be on a championship-caliber team. However, the data did bring up the idea of opportunity cost. Point guard might be the deepest position in the NBA, and thus, most replaceable.

Across most positions the salary difference between a superstar at that position and a replacement player at that position is pretty drastic. But if the point guard spot is deep enough (and it seems it is), the replacement-level player, or production, is higher than in other positions, despite the same difference in salary. Thus, â€œpaying upâ€ for a top level point guard does not seem to be a financially sound move when paying up for a less replaceable position will earn you a greater advantage.

To follow up on the data from Wednesday, I further compiled salary data from each of the championship teams. The following table and chart show the average percentage of cap each position used up for their team. It still leans heavily towards non-point guard positions being of high importance. 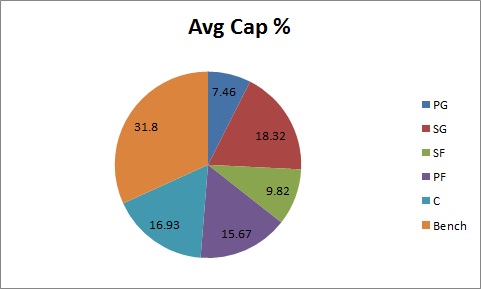 Regardless, the data shows that teams that have won the title have tended to save money on the point guard position. A reader from Wednesday brought up a good point that I want to mention â€“ perhaps this trend follows whoever the best player in the league is at the time. We've had Jordan, Hakeem, Shaq, Kobe, Duncan, and LeBron. Perhaps if a point guard takes over that title (although with Kevin Durant and Anthony Davis lurking, that doesn't seem likely), then this trend will start to correct itself.

In case you were wondering how your specific team fit into this championship model of salary allocation, I've compiled a list of team's point guard salary cap percentage in the following table. I'm only including teams that our algorithms say have a 25% or higher chance of making the playoffs this year.

Interestingly, there were only five teams that have a shot at the playoffs whose point guard situation fits the model of 7.46% salary cap allocation or less. Of course, rosters are not finalized yet, so if teams add new players, it will obviously drop the percentages down.

The Rockets have struck gold with Patrick Beverley, who is set to make less than $1 million this season. Having an above average point guard for that price (only 1.5% of their cap) is a huge relief on the rest of the salary cap, and allows them to pay up for other positions â€“ $21.4 million for Dwight Howard and $14.7 million for James Harden. The Heat actually first acquired Beverley (via a draft trade with the Lakers) but they waived him at the end of training camp. In hindsight, keeping him would've not only given them a much needed young, spry player over the last couple seasons, but also given them some cap flexibility, much like the Rockets have had.

Some of the guys on that list are superstars. Chris Paul might be the best point guard to play since Magic Johnson. Of course a GM would want Chris Paul on his team. But it's not unfair to start to question opportunity cost and the how replaceable the position is. Rose, Paul, and Westbrook are all great. But when you start to go down the list and see a guy like Mike Conley only taking up 12% of the Grizzlies' cap, it's hard convince yourself that the production level is that drastic. Paul is the best point guard in the world, but just how much better is he than Conley? Is he really twice as good? Or is the drop-off the same as, say, LeBron to a Trevor Ariza?

Of course, all it takes is for the Clippers to hit a couple of breaks and take the title for this article to be outdated and silly. But the nature of the depth of positions would still be true in today's NBA. There are a lot of great point guards in the league. Perhaps paying for one of the top-five guys just isn't an optimal decision. The opportunity cost is just too great.

Which NBA Position Is Most Important to a Championship Team?