Which NBA Position Is Most Important to a Championship Team?

Bryan Mears  —  @bryan_mears Sep 24th, 2014
Share on Facebook Share on Twitter
If you were constructing a championship-hopeful team from scratch and you were able to have one superstar, what position would you want him to be?

With all the recent media buzz about Eric Bledsoe offers and sign-and-trades, Rajon Rondo disses from his owner, and the true value of Russell Westbrook, point guards are obviously an important topic right now. In conversations I've had with NBA colleagues over the past week, a matter I kept hearing over and over again was in regard to position versus position value.

We saw a lot of this during this summer â€“ Bledsoe is asking for a maximum contract and feels he deserves it with his recent play with the Phoenix Suns. And seeing the players who received hefty contracts this summer â€“ the Chandler Parsons and Gordon Haywards of the world â€“ itâ€™s hard to blame him. But Bledsoeâ€™s problem is that he plays a very stacked position.

There are a lot of good point guards in the NBA currently, but that number is far lower when talking about wings or small forwards. This is Econ 101: the basics of supply and demand. Bledsoeâ€™s market value is much lower than a wing because the current supply is higher, and thus, the demand is lower.

The specific question Iâ€™ve heard recently is: Which position is the most important for a contending team? Or to make it even simpler: if you're constructing a team from scratch, with the obvious goal of winning a championship, and you could only have one superstar on your roster, what position would you choose that player to be at?

Take out the names. Right now we think of small forwards/wings and think about LeBron James and Kevin Durant, but thatâ€™s not fair to this exercise. No names, just positions. Do you want your superstar to be a point guard? Do you want him to be a dominant shooting guard? What about a versatile small forward? Perhaps a mid-range shooting power forward? Or maybe you love a big, powerful center? Which one would it be?

I collected data for past championship teams â€“ how each teamâ€™s top player at each respective position produced in terms of RAPM (Regularized Adjusted Plus-Minus) and win shares. I went back all the way to Michael Jordanâ€™s first championship in 1990, as that is the most recent season I could find RAPM data for. I then averaged it out over that time frame â€“ roughly 25 years â€“ to see if one position has been historically more important than the rest. 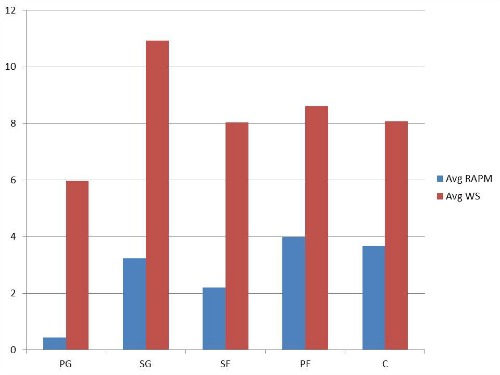 Interestingly, the data shows that itâ€™s pretty even among the positions, except for the point guard spot. The shooting guard position had the highest marks in regards to win shares, while RAPM points heavily towards the importance of big men.

To be fair, the data set starts in 1990, right after all-time great point guard Magic Johnson led the Lakers to multiple titles in the 1980â€™s. However, that was still 30-plus years ago, and itâ€™s probably worthwhile to ponder just how important the point guard position is in the modern 2014 NBA game.

Hereâ€™s a list of the point guards for each team that won the title since 1990:

In that list, you have a couple great point guards (though in regards to the all-time greats like Jason Kidd and Gary Payton, they were at the end of their career and title-hunting) and then a bunch of solid floor managers.

This is not to say that an NBA team canâ€™t win a title with a superstar point guard. However, the data does question if a team can win one when theyâ€™re being paid superstar money. Or to put it in more economical terms, perhaps a team canâ€™t win with the majority of their available cap being taken up by the point guard position.

According to my research, the only point guard in the last 25 years that you could say was even the best player on a championship team was Billups in 2004 (and even thatâ€™s arguable). In fact, out of all the champion point guards, he was the only one that registered a double-digit win share season. The PG position as a whole was nearly half as productive as the shooting guard position, specifically in regards to total season win shares.

Can Chris Paul, Russell Westbrook, or Stephen Curry win a title as the best player on their team? I certainly wonâ€™t say no, but it would arguably be the first time it has happened in three decades.