Fantasy Baseball: Can Miguel Cabrera Bounce Back in 2018?

Sal Cacciatore  —  @SCacc8 Mar 8th, 2018
Share on Facebook Share on Twitter
After years as one of fantasy baseball's most reliable players, Miguel Cabrera is now a major risk. Can owners expect him to revert to form this season?

For the better part of the last 15 years, Miguel Cabrera was among the safest bets in fantasy baseball. Like clockwork, the slugger could be expected to give owners 650 plate appearances with 100 RBI and a batting average north of .300.

What a difference a year makes.

The 34-year-old is coming off the worst season of his career, turning from a sure thing into one of the bigger risks of the upcoming fantasy campaign.

The long-time Tiger will be 35 before the end of April, and given his struggles last season, it would be hard to fault owners for wanting to stay away.

Then again, his average draft position in National Fantasy Baseball Championship drafts is 96, which would make him the 12th first baseman to come off the board. Since he was 32nd in fantasy points at the position in standard leagues last year, it would seem like his ADP is way too high.

Our preseason projections have him pegged as the 14th-best first baseman in baseball, forecasting a .277 average and .846 OPS. That average is tied for ninth among first basemen, while his projected RBI (78), home run (25) and run (68) totals rank 17th, 19th and 18th, respectively. He has the seventh-best forecasted OPS at the position, but should suffer in terms of the context dependent numbers because of a Tigers offense that FanGraphs projects to rank 22nd in runs per game.

The models are high on Cabrera because they do not only look at his 2017 season, but see a player who slashed .316/.393/.563 with 38 home runs the year before. Projection models tend to have longer memories than we do, and they have not forgotten that ultra-reliable player heâ€™s always been.

However, this can also sometimes make projection models slow to react to a real change in true talent caused by a change in approach or injury. Cabrera was on the disabled list in April and was plagued with a series of health issues afterwards, including a pair of herniated discs in his back. He told MLB.com in September that his back had bothered him â€œall year,â€ but it is hard to say with any certainty what this means for this year (for whatever itâ€™s worth, he reportedly said after arriving at spring training this year that he â€œfeels healthyâ€).

Obviously, his health will be the biggest factor as to whether his decline continues or he performs like the projections say he will, but there are also some takeaways from last year that can probably help us here.

While Cabreraâ€™s results were unquestionably bad in 2017, itâ€™s not clear that the underlying process was as poor.

His BABIP fell under .300 (to .292) for the first time in his career, and while BABIP isnâ€™t always a proxy for luck (especially for hitters), his batted-ball profile does not necessarily imply the drop off was warranted.

Cabrera posted the third-highest line-drive rate in MLB and the highest of his career (27.3%). While line-drive rate is the least predictive of the three batted-ball types, it is also the one that correlates the most with BABIP.

Based on his launch angles and exit velocities, Cabrera â€œshould haveâ€ ran a .325 BABIP, according to xStats.org, which utilizes Statcast data. While xBABIP does not have a high correlation with future BABIP (nothing really does), this suggests that his overall production should have been better.

Cabreraâ€™s exit velocity itself did fall to 91.2 miles per hour, down from 93.6 mph in 2016 and 93.8 in 2015, per Statcast data at Baseball Savant. However, exit velocity on its own has almost no correlation with BABIP, but does have a fairly strong relationship with power stats like ISO and home run rate.

As mentioned, Cabrera had his worst power season of his career, dipping below the league average ISO for the first time ever. While he did hit the ball less hard by his standards, he was still tied for sixth in terms of exit velocity among the 182 plaiyers to put at least 300 balls in play last year.

Some of the power decline is probably tied to the line-drive rate spike, which came at the expense of both his ground-ball and fly-ball rates, with the latter number coming in at a below-average 33%, per FanGraphs. Itâ€™s not unreasonable to suggest this change in approach was a product of the injury.

Still, even given the angles at which he hit the ball, Cabreraâ€™s power numbers still probably should have been higher. His expected ISO was .220, 71 points higher than his â€œrealâ€ mark, per Baseball Savant.

xStats creator Andrew Perpetua noted at FanGraphs that there were some major discrepancies between the observed and power data at Comerica Park that may be wind-related. Since the Tigers did not change ballparks, this issue could be at play again in 2018.

The wind doing a number on his hard-hit balls may have been a factor here, but it does not appear to be the only one.

When trying to project future performance, full-season data is generally more predictive than split season data, but in this case, a look at Cabreraâ€™s first and second halves is warranted. He posted a 110 wRC+ in the first half and just a 65 wRC+ in the second. Again, it is very possible this was the result of the injuries taking their toll, and even the xStats power numbers that are more favorable to Cabrera reflect this. 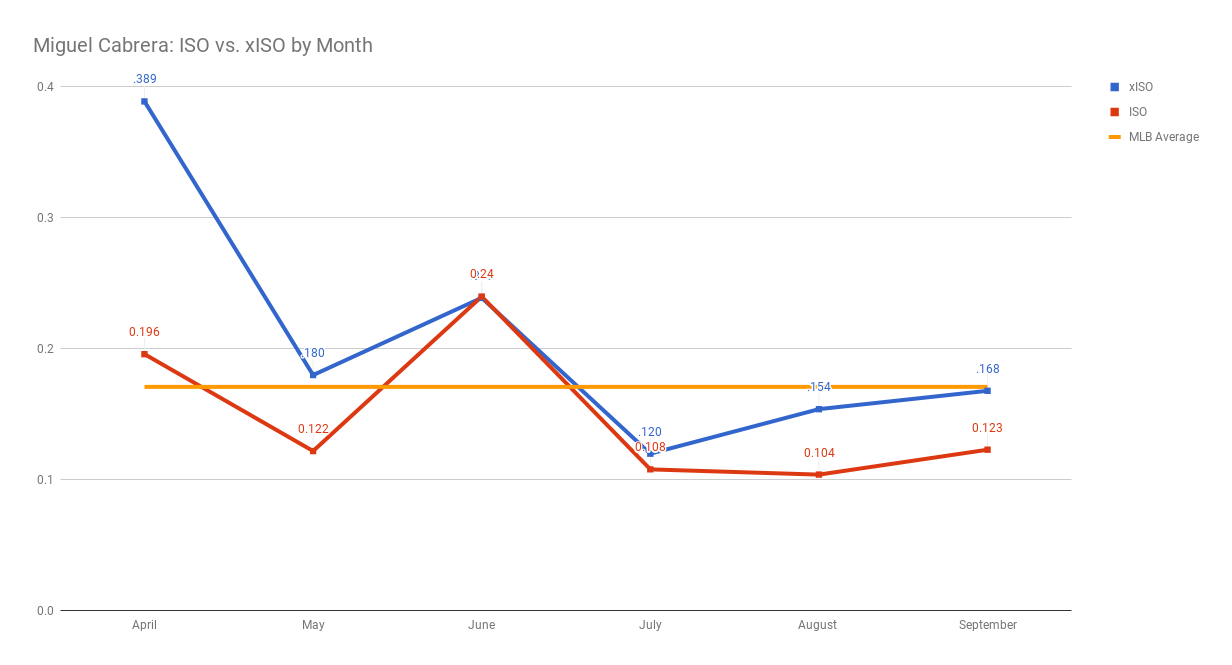 That said, the expected batted-ball and plate-discipline numbers do not paint as bleak of a picture. His xBABIP was above .300 in all but two months. Even in July and September, they were both at .296. His strikeout rate went up from 20.4% to 21.4% from one half to the next, while his walk rate was 11.1% as of August 30th (though in September, he only walked 3.4% of the time).

This closer look at his first- and second-half numbers are emblematic of the overall problem with Cabrera. There is enough here to be optimistic about a rebound but also plenty of reasons to imagine a continuing decline.

How much of his 2017 results were skill related versus randomness? What was the extent that injury played a role, and more importantly, will he be hampered by it again? Did the park play a major role in keeping his production out of line with the Statcast-derived numbers?

There are no clear answers here. The only thing that seems certain is that Cabrera is a risk, which is a wild thing to say about a player who was once a model of reliability.

Rhys Hoskins Is Being Overvalued in Fantasy Baseball

3 Reasons Why You Should Avoid Shohei Ohtani in Fantasy Baseball