There are times when a simple graph can tell the entire story of a baseball game.

Thursday night's 11-inning, 9-8 win by the New York Mets over the Philadelphia Phillies at Citi Field was one of those times. Here's the win probability graph from FanGraphs. 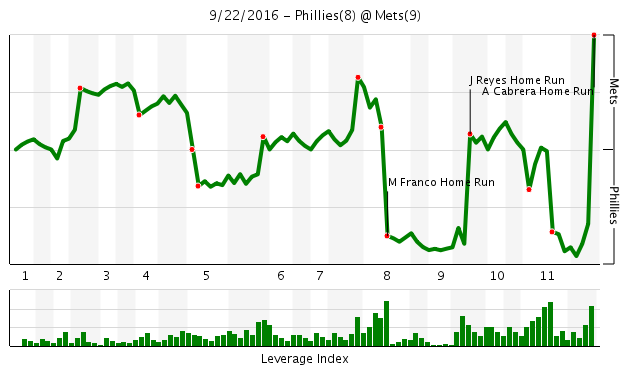 I'm getting a small case of vertigo.. In a nutshell, the Mets, who are battling the San Francisco Giants and St. Louis Cardinals for one of two National League wild card spots, hit a game-tying homer in the 9th and then, down by two runs in the 11th, scored three in the bottom half of that frame, to pull out their most dramatic win of the season.

And it was all capped by the bat flip of the season, courtesy of Asdrubal Cabrera.

Think AsdrÃºbal knew it was gone?

The Phillies came into the game looking to play the spoiler, but for one night at least, the Mets would have none of it. Let's walk you through one of the best games of the 2016 season thus far.

Heading into the top of the 8th, this looked like just another normal NL East matchup between the Mets and Phils. New York came into the game with a slight edge in the season series, going 7-5 against Philadelphia this year. And when they entered the 8th inning with a 4-3 lead, it seemed as though New York would push that record to 8-5 with little to no fanfare.

When Maikel Franco stepped to the plate with runners on first and third and one out, the Mets were 59.8% to win the game. Then Franco, who had not homered since August 18th, a span of 27 games, did this.

That dinger gave Franco 23 on the season, tying him with Ryan Howard for the team lead and dramatically lowered the Mets' odds of winning the game from 59.8% to 12.3%. The Phils were in good shape now.

The score remained 6-4 until the bottom of the 9th, and even though the Mets entered with only a 7.3% chance of winning, they had to feel somewhat confident facing Phils' closer Jeanmar Gomez, who had a 10.13 ERA over his last 16 games going into last night. He had given up 23 hits and 15 earned runs in his last 13 1/3 innings.

That trend continued. With one on and one out, and the Mets' chances of winning now 8.8%, Jose Reyes got the New York crowd foaming at the mouth.

But you've got hand it to those spunky Phils. They would not be deterred, even though they are 20 1/2 games out of first.

After A.J. Ellis singled home a run and Franco added an RBI walk, the Phils led 8-6 heading into the bottom of the 11th. New York's chances of winning were back down to 7.3%. They were down to 3.5% when Brandon Nimmo grounded out to start the inning, but then Michael Conforto walked and Reyes singled to put runners on first and second with one out. The Mets' odds had improved to 17.5%.

Then, Cabrera did his thing, capped off by an epic bat flip.

We're still waiting for the StatCast information on the rotation of the bat as it tumbled end-over-end in the air. And at the end of the day, the Mets used virtually every last walking, talking human on the roster to pull this game out.

The win was a small measure of payback for New York, who as you'll recall, were the victims of furious late-season rallies by the Phils in 2007 and 2008. Mets fans had to enjoy this ballgame, even if it doesn't heal all those old wounds. And, wouldn't you know, it was actually historic.

The @Mets won their first game in history in which they trailed by multiple runs in the ninth inning and in extra innings (via @EliasSports)
â€” ESPN Stats & Info (@ESPNStatsInfo) September 23, 2016

But this was a victory New York had to have. The Giants also won, putting the Mets and San Francisco up a half-game on the idle Cardinals in the crazy NL wild card race.

For one night, the baseball gods smiled upon the Metropolitans and kept them in the drivers' seat for a return to October baseball.