The Smash and Grab: 6 Teams With Elite Hitting Opportunities in Week 8

We are going to take a look at the New York Rangers (11th seed) versus the Carolina Hurricanes (6th seed). FanDuel Sportsbook has the Hurricanes as -136 favorites, with the Rangers +112 underdogs.

This is a best-of-five series, and it should go without saying, but there is no home-ice advantage since the games are being played in the NHL Toronto Bubble.

During the 2019-20 regular season, the Rangers and Hurricanes played against each other a total of four times since they are both in the Metropolitan Division. Surprisingly, the Rangers won all four games and held a +8 goal differential. I say surprisingly considering the fact the Rangers were among the worst defensive teams in the league, while the Hurricanes were not only strong on offense but also one of the best in preventing opposing shot attempts.

One shot metric to look at for the NHL is Corsi, which can be referred to as Corsi For -- shot attempts generated on offense -- or Corsi Against -- shot attempts allowed while on defense. Shot attempts equate to overall offensive pressure, and thus, more opportunities to score goals. The opposite is also true for defense -- allowing more shot attempts is bad and puts your goalie under pressure all game.

These are two teams at the opposite ends of the spectrum, yet, the Rangers were able to come away with four wins in four games against the Hurricanes this season.

Now, just because the Rangers won all four games doesn't mean it was all sunshine and rainbows for them. In fact, they got outplayed by the Hurricanes in three of the four games and could've been graced by a bit of puck luck in the victories.

Despite losing all four games, the Hurricanes were truly able to flex their muscles during the regular season matchups, which should be the main point to focus on. If we take a look at each of the four games, you will see how dominant the Hurricanes actually were in each game.

Carolina simply dominated the first three games and somehow lost each one. The final game was nearly neutral, but the Hurricanes were still unable to come away with the win.

If we look beyond the four games they played each other, we can get a better idea of how good (or bad) each team actually was. 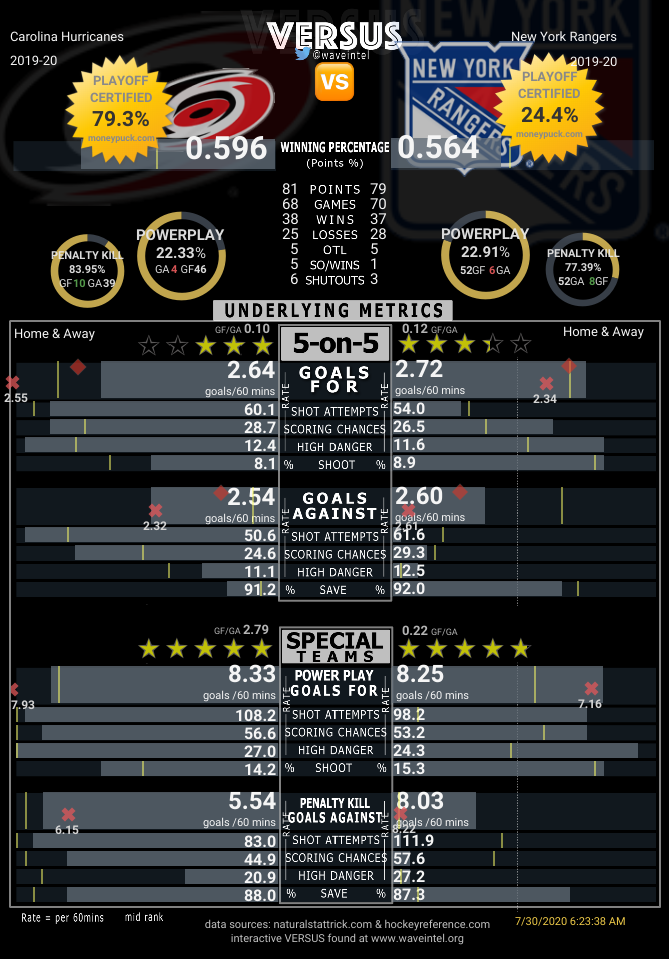 How To Bet The Series

When it comes down to it, the Hurricanes are the better team in nearly every aspect of the game, and despite the 0-4 results in the regular season, you should look to side with them over the Rangers. At -136 odds for the Hurricanes to win the series, there isn't much juice to side with a strong team and get the return of the NHL started in a big way.