The Le'Veon Bell Dilemma: How Should You Value Him in Fantasy Football Next Season?

Now that we're done with the understated portion of the article, it's time (yep, in April) to take a serious look at when drafting Bell, who is expected to miss the first three games of the season in 2015 because of a suspension, is the right call.

What is Bell really worth, then, if he's missing three games -- roughly a quarter of the fantasy regular season?

Let's try to find out.

Get it? Because his name is "Bell" but mostly because he saw 68.56 percent of the Steelers' carries last year and roughly 80.00 percent of their running back carries.

Most important, for fantasy purposes, he was one of the most reliable fantasy backs in the league last season. Only he and DeMarco Murray posted at least 10 PPR fantasy points in all 15 games (I'm excluding Week 17 from every measure because we're talking fantasy football here). Arian Foster hit the 10-point mark in every game he played, too, but he missed three games in the fantasy season.

What if you don't play PPR leagues? Well, I have you covered. I actually did a pretty in-depth consistency study on the 2014 season and found -- or reinforced -- something that still remains true despite the new passing league: elite running backs offer the biggest intrapositional gap in all of fantasy football. Put another way: elite running backs are the most valuable players in the game because of the consistency they possess and the gap they provide over the replacement-level players at the position.

If we break down the 2014 season and do a little math, Bell, among the top-48 backs through Week 16, offered the third-most fantasy points per game in standard scoring leagues at the running back position.

Based on his performances, Bell owned a 68 percent confidence interval of between 7.74 points and 27.19 points. In simpler terms, in 68 percent of his games (11 of the 16 typical fantasy weeks), Bell could have been expected to provide at least 7.74 standard points. This was the third-highest floor among the running backs. His ceiling (27.19 points) was the highest. (If you want a more detailed breakdown of the math, check out my introductory article to the series.)

If you think of this breakdown as a player's "realistic" potential (because 70 percent of a season is pretty solid) in a given week, Bell offered both the biggest upside -- even in standard leagues -- and one of the highest floors at the position. The same was true for his PPR scoring: his floor of 13.38 points ranked third and his ceiling of 33.89 was tops.

We're dealing with one of the most relied upon, most successful, most highest upside-iest backs in the NFL. Does missing three games really matter?

The Cost of Passing on Le'Veon

There's a clear distinction to be made and something that must be remembered: drafting Bell with your first pick doesn't mean you're getting zeroes for your squad. You know he's out, and you aren't going to get the Eddie Lacy treatment from 2014: a severely disappointing 16.1 half-PPR points from your RB1 over the first three weeks of the season.

Rather, you'll be trying to fill in the gap with the rest of your squad for three games. Alternatively, you can pass on Bell in the first round, and then you have two options: a running back or any other position.

Let's discuss the path of passing on Bell.

You can take Jamaal Charles, Matt Forte, et cetera, and hope that your RB1 produces like an RB1 for the entire season. I can't prognosticate and determine whether these players will pan out or will be "better" than Bell or not, but drafting early running backs is the best way to get elite running back production despite what any anecdotal evidence suggests.

As for this year, 7 of the top 10 backs in terms of half-PPR points per game had average draft positions (ADP) lower than 19. That means that, in a 10-team league, 70 percent (and each of the top seven) backs in points per game were drafted by round three. Justin Forsett was undrafted, C.J. Anderson had an ADP of 164.6 (and was only useful during the back half of the season), and Mark Ingram had an ADP of 113.6.

Success in landing a running back stud from the wire or late in the draft is not easy to come by, and it hasn't been a one-year anomaly. In fact, we've covered this before on numberFire.

A key proponent of fantasy football analysis is admitting that a singular view isn't the absolute truth. Early backs don't always pan out, and some non-early backs do.

With this in mind, there is no guarantee that Bell will, when he returns, be as elite as he was in 2014. Nobody can prove that one way or another. However, Bell has shown that he possesses the ability to provide an elite edge over the rest of the position as well as provide a safe floor each and every week. That much has been proven.

This potential edge simply doesn't realistically exist from backs who aren't valued highly (i.e. those with first- or second-round ADPs). In that sense, the collective fantasy community is pretty successful. We can identify which players have the potential to be elite, even if they don't always pan out. Seriously, just go back and check out the bust-rate study done prior to 2014 by our own JJ Zachariason.

"The biggest error I see early-round tight end and quarterback drafters make [is that] they assume they can bulk up on running backs in the middle rounds, hoping one hits."

That line of thinking -- that is, thinking that middle- and late-round running backs provided value -- proved erroneous in 2013, and it was the same case in 2014. Check out the results from this year from the backs who actually finished as a top-48 back in half-PPR scoring. (Just click on it for a closer look.) 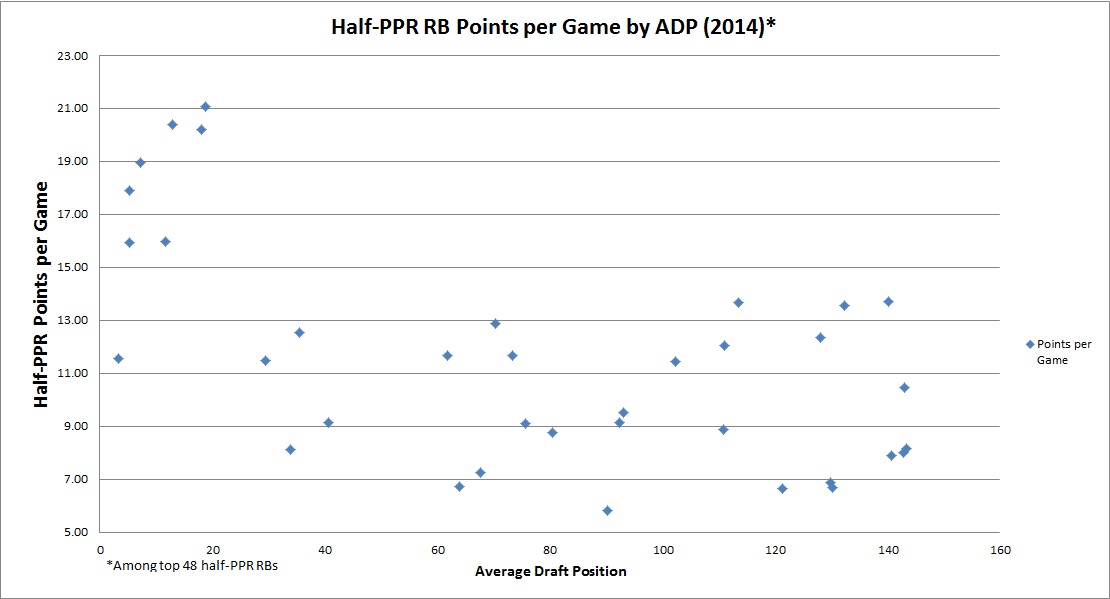 Basically, there was no advantage of a third-round back compared to a last-round back this past year, which -- again -- isn't just anomalous. (And including undrafted players wouldn't really change how the graph looks. None of them averaged at least 14.00 points per game.)

The biggest issue with opting for a non-running back position in the first round is forgoing substantial potential for your team. Bell, of course, could be like the left-most blip (LeSean McCoy) or not even on the chart (Adrian Peterson).

We just don't know, but the biggest certainty is that Bell can potentially be one of the biggest weekly difference-makers in the game in 2015.

Based on my briefing of Twitter arguments debates over the Bell news, a lot of the pricing comes down to how highly you value the running back position. Yes, you absolutely can find next year's Justin Forsett off the wire. You can also draft the 2015 version of LeSean McCoy.

If you pass on him for a different consensus top back, then you could avoid an unnecessary headache, as Bell was about 1.5 PPR points per game better than the second-best back. That's a significant gap, but it's not so great that you should consider taking him over backs in whom you feel confident. We aren't talking a 30-point-per-game player or anything -- just a really, really good one who can compete with the rest of the elite backs at the high end of things.

If you spend a first-round pick on Le'Veon Bell, yes, you'll be scrapping for replacement running back production -- which you may or may not find in the rest of the draft after the first two rounds -- for three weeks before the potential of a stud back returns to your lineup.

If you pass on Bell once the rest of the ostensibly elite running back choices have been taken in favor of another position, then you'll also avoid the headache of waiting for Bell to return. However, you'll be buying a ticket to the "Find a Reliable Running Back in the Middle or End of the Draft or Off of the Waiver Wire While the Rest of Your League Eyes Up the Same Player Sweepstakes."

And based on the evidence, that's a numbers game that probably isn't worth passing up Bell for, even if you go without him for three weeks.