Jeremy Maclin Can Be Just What the Ravens Need

Today, all it seems like the news, marketing companies, sports teams, and politics can talk about is how to appeal to the millennial -- the near-mythical young creature who prefers texts to letters and avocado toast to home mortgages, so the legends say. As a younger person myself, I too like avocado toast and the progression of the world and technology. However, as an old soul, I also realize thereâ€™s no reason why we canâ€™t learn some things from those esteemed elders of our past.

Itâ€™s a balancing act between beauty and wisdom.

The NFL as a whole is enraptured with the youth movement; specifically, teams are cutting veteran players for the sake of saving a few dollars and moving their franchise into the future. The Kansas City Chiefs are one of those teams who has sold it all for shiny new toys, and in doing so cut wide receiver Jeremy Maclin this offseason.

But Maclin isnâ€™t some relic; thereâ€™s a lot of good football left in him.

The Baltimore Ravens realize that, and they signed Maclin on Monday to a two-year deal. By treading the tightrope between selling out with veterans and selling off for youth, the Ravens and Maclin are looking to make big strides in 2017.

Itâ€™s no secret the Ravens have been on the hunt for pass-catchers this season. Veteran Steve Smith retired at the end of 2016, opening up a lot of opportunities in the offense. Kamar Aiken was underused and left the team in free agency, and tight end Dennis Pitta suffered his third dislocated hip last week and was released.

And itâ€™s not as though there was a ton of depth or impact left after that.

The biggest unfulfilled potential comes in the form of wide receiver Breshad Perriman, the Ravensâ€™ 2015 first-round selection who has barely played in his time in the pros so far, due to injury. Tight end Benjamin Watson ended his 2016 season on the injured reserve, as did Maxx Williams and Crockett Gillmore. The same was true of wide receiver Mike Campanaro. No one has staked a claim on a premier role in this offense to complement deep threat Mike Wallace, and so there is little threat to Maclinâ€™s target load and roster spot with Baltimore.

We can also see how much room there is for the wizened veteran Maclin to enter the Ravensâ€™ young and unproven depth chart through the help of Net Expected Points (NEP), numberFireâ€™s signature metric.

NEP is a metric that describes the contribution a play (or player) makes to their teamâ€™s chances of scoring. By adding down-and-distance value to the box score, we can see just how much each play and each team as a whole influence the outcome of games. For more info on NEP, check out our glossary.

The table below shows the Reception NEP per target of Ravens receivers last year compared to the team average (0.62). This isn't an impenetrable situation by any means.

Smith was by far the most valuable receiver on the team, and he rode off into the sunset. He was also the second-most targeted wideout on the roster, leaving 102 targets available in his absence. Aiken was much less valuable on a per-target basis, but he also vacates 50 targets from the 2016 season.

For wide receivers alone (not counting the opportunities opened by Pitta), thatâ€™s a total of 152 targets available from 2016. Despite Perrimanâ€™s relatively rough 2016 debut, thereâ€™s a good chance for his role to grow as a full-season starter in 2017, but with 66 targets already under his belt, heâ€™s not going to get the full benefit of Smith or Aikenâ€™s loss. Prorating Perrimanâ€™s 2016 work to a full year (he didnâ€™t see a target in two games) gives him 75 looks. Add in a full offseason of healthy practice and a load of 100 targets isn't unreasonable, although it may be on the high end.

Interestingly, the last two years Baltimore offensive coordinator Marty Mornhinweg led a halfway-competently constructed offense -- 2014 and 2016 -- his top wide receiver saw 114 and 117 targets, respectively; not coincidentally, our math for Baltimore works out to around 115 open targets. That means there are a ton of opportunities available, and the Ravens need a consistent playmaker to feature. That's good news for Jeremy Maclin.

Old-Fashioned and On the Rocks

So, the opportunity is there for Maclin to be a strong fantasy option and a quality real-life contributor catching passes slung by quarterback Joe Flacco in an offense that was the most pass-happy by total volume (712 drop backs) and ratio (1.93 passes per run) last year. But what role will he have, and what can he do with it?

Thereâ€™s a decent chance that the Ravens maximize Maclinâ€™s shiftiness and minimize his possible lost step by having him work out of the slot, where he ran 48 percent of his routes in 2016, per Rotoworld.

Thatâ€™s a great deal of what they did with Smith last year; through Week 9 of 2016, he had run 44 percent of his routes from the slot. While that made it tough for him to rip off big plays, it gave Smith a great chance of getting the ball in his hands. 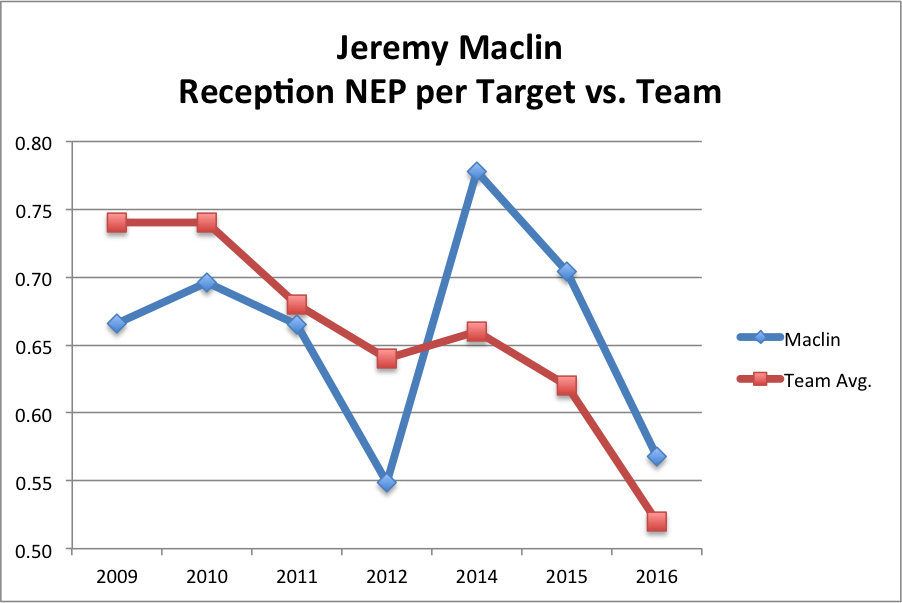 In actuality, though Maclin definitely downturned in 2016, he was still above-average for how the Chiefs utilized their receivers. Only Chris Conley generated more value per-target among the Chiefsâ€™ receivers last year than Maclin and he was just league-average; relative to the offense, though, they were both good. The groin injury suffered last year definitely hampered Maclin in-season, but with a full offseason of recovery, thereâ€™s little reason to expect a major drop relative to his new team (if any) this year. The Ravens team average Reception NEP per target was 0.62; if Maclin stays at about +0.05 relative to his team next year, that would be a large swing upward once more for his value.

What does this mean for his box score output?

As a Chief, Maclin averaged 8.12 yards per target, a 5.00 percent touchdown rate, and a 65.5 percent catch rate. Even if those low numbers hold, at a workload of 115 targets, that would mean a 2017 receiving line of 934 receiving yards and 6 touchdowns on 75 catches -- what would be the 23rd-most PPR fantasy points among wide receivers in 2016, and thatâ€™s without assuming he steals any of 2016 target leader Mike Wallaceâ€™s work. Obviously there are a lot of variables at play, but it looks like Maclin is in line for a nice year.

New is not always better. Sometimes a golden oldie is just as good.

Jeremy Maclin Is a Buy-Low Candidate in Fantasy Football

Why the Baltimore Ravens Struggled in 2016

Do the Ravens Have a Viable Threat Outside of Steve Smith?