Sometimes, a player's performance on the field does not match up with his fantasy production.

I created some models last year to help evaluate fantasy production as it relates to numberFire's Net Expected Points (NEP). On every play, there's an expected point value an NFL team has for the drive based on yard line, down, and distance. What happens on that play can change the expected point value on said drive. What NEP does is aggregate the value gained or lost on every play into a single, net number.

You can read more about NEP in our glossary.

These models helped identify players whose on-field performance varied drastically from their fantasy production and predicted that they would regress closer to their mean in 2016. So, we're back here to do it again with the same exercise for the upcoming season.

Much like the quarterback model, there are some changes to the wide receiver model for 2017.

Last year's receiver model looked at the last five years of data, and set the required number of targets at 100. The 2017 version goes all the way back to 2000, and lowered the target number to 75. This gives a much larger sample, 999 players, than last year (180 players).

Here is the graph of Reception NEP versus fantasy points per game accrued through receiving for wideouts with at least 75 targets since 2000. 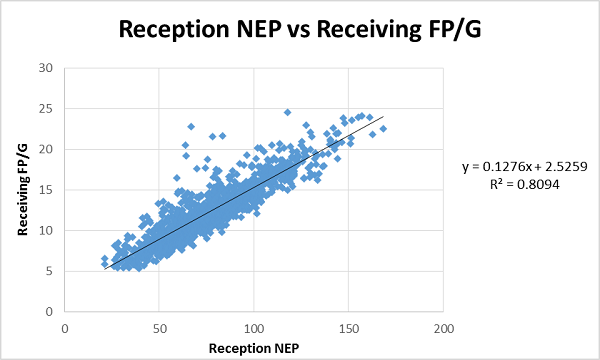 The coefficient of determination is actually slightly better using this sample (it was .8075 last year), and the massive increase in sample can make us more confident in the quality of the model.


Performance is being checked in this way because we expect receivers who outproduced their on-field play to decrease the following season. Also included is the percentage of wideouts in each bucket who regressed and the average change in scoring the following year for the entire group.

There is a large jump in expected change in performance once receivers hit the 2.5 FPPGoE threshold. At that point, 80 percent of qualifying receivers regress, with an average change in scoring of -1.816 points (remember, this is only points through receiving). This will be the threshold we use to identify our negative regression candidates.

We can also check for significant thresholds for positive regression candidates.

Identifying the best threshold here is a little tricky. We see tremendous jumps in regression at -2.5 and -3.0 FPPGoE, but the samples on those groups are fairly small -- fewer than 20 in both cases. It may be best to use the -2.0 FPPGoE threshold, as there is also a sizable jump in regression percentage and plus/minus.

The odds of improving or decreasing in scoring for a random receiver was slightly more slanted than they were for quarterbacks. 55 percent of wideouts in the sample got worse the following year, while 45 percent improved. That still puts the model above random chance in predictive power by 45 and 47 percent respectively.

Using this as a guide, there were eight wideouts who fell into the FPPGoE threshold established in either direction. Two of them, Pierre Garcon and Terrelle Pryor, have changed teams, so assessing their 2016 play probably isn't as valuable as it is for the other six.

Here are your six main regression candidates for 2017.

A.J. Green was top five in fantasy points per game in 2016 but seems due for massive regression in 2017. His FPPGoE of 6.45 is the sixth-highest since 2000, with the five players ahead of him losing an average of about 4.5 points per game the following year. It doesn't help Green's case that the Bengals just spent a top-10 pick on John Ross.

Green is going as the fifth wideout off the board in MFL10s, which seems to price in all of his upside and none of his downside.

There has been no wide receiver more dominant the last four seasons than Antonio Brown, but the pack may start to catch up to him in 2017. His 2016 Reception NEP of 109.7 was closest to Odell Beckham at 111.7. OBJ was the fourth-highest scoring wideout in points per game but scored 1.8 fewer per game. The point here is to show that Brown probably is still a top-flight receiver, but he just may not be quite as dominant this year.

Michael Thomas was outstanding in his rookie season, scoring the seventh-most fantasy points per game. However, his closest NEP comps were guys like Julian Edelman, Demaryius Thomas, and Amari Cooper, who finished as the 16th-, 17th-, and 18th-highest scoring receivers, respectively.

The departure of Brandin Cooks means that some more volume could be coming Thomas' way in 2017, which would mitigate a loss in efficiency. However, it should be noted that the most targets by a Saints wideout in the last five seasons was Marques Colston with 130 in 2012. That is just nine more targets than Thomas had last season.

Larry Fitzgerald posted yet another WR1 season in 2016 after appearing on this list last offseason. Though he averaged fewer than 10 yards per reception, Fitzgerald continues to succeed because of volume, with 108 receptions. If he can continue to see elite target numbers, the regression won't be as severe in PPR leagues. If the other wideouts in this offense start doing more, he probably falls off.

One of the most underrated receivers in fantasy circles is T.Y. Hilton, who finished eighth-highest in fantasy points per game despite leaving over two points per game on the field. His 129.8 Reception NEP was the second-highest in football in 2016 -- that includes being better than Brown, Beckham, and second-leading-scorer Jordy Nelson. Hilton could make the leap to a bonafide top-five fantasy wideout in 2017.

It's amazing to think that Mike Evans finished third in fantasy points per game in 2016 but also left the most points on the table based on the model. He was simply awesome last season, with 144.2 Reception NEP -- by far the most in football. Evans should see his target totals go down now that the team has added DeSean Jackson, Chris Godwin, and O.J. Howard, but that should come with a spike in efficiency. It shouldn't surprise anyone at all if Evans is 2017's top wideout in fantasy points per game.