NBA Odds Update: Are We Sleeping on the 76ers?

Matthew Fisher-Davis Isn't to Blame for Vanderbilt's Loss to Northwestern

Jim Sannes  —  @JimSannes Mar 17th, 2017
Share on Facebook Share on Twitter
Fisher-Davis made a mental error toward the end of Thursday's Round of 64 contest, seemingly costing Vanderbilt the victory, but he's not to blame for the loss.

There is no tougher way to lose an NCAA Tournament game than with a mental error. The Vanderbilt Commodores found that out in heartbreaking fashion on Thursday.

In case you missed it, Vanderbilt's Matthew Fisher-Davis fouled Northwestern's Bryant McIntosh with the Commodores up, 66-65, with 14.6 seconds left in the second half.

Vandy had just taken the lead, and instead of Vanderbilt defending with a chance to win it, the Wildcats' best free-throw shooter was going to the line for two.

Northwestern went on to a 68-66 victory, advancing to the Round of 32 for a matchup with the Gonzaga Bulldogs. Not shockingly, much of the blame for the loss went to Fisher-Davis, and he took full responsibility.

Matthew Fisher-Davis: "It was a collective effort in coming back, and it was my dumb mistake why we lost."
â€” Adam Sparks (@AdamSparks) March 16, 2017

Given the leverage around the time when the foul happened -- and the obvious ramifications of what transpired after -- it's easy to see why Fisher-Davis would be the object of frustration.

Based on the numbers, though, he does not deserve this blame.

The Numbers Behind the Foul

Let's go back and look at that foul again with the help of numberFire Live, which tracks live win probability throughout every game of the tournament. This will tell us the impact of the play in question to show whether or not Fisher-Davis is really the person in the wrong here.

Before the foul, Riley LaChance had just hit a two-point field goal to put the Commodores up, 66-65, with 18 seconds left. By the time Fisher-Davis fouled McIntosh, Vanderbilt's win odds were at 77.95% with 15 seconds left. After the foul, they were still the favorites to win 64.50% of the time.

After McIntosh made both of his attempts, Vanderbilt had possession down one with 35.50% win odds. That's absolutely not insurmountable.

The Commodores then took their time on the other end before LaChance launched a three with five seconds left that missed, and the ball went out of bounds off of Vanderbilt.

The clock reset with 1.4 seconds left, and Northwestern's win probability was up to 97.32%. Yes, Fisher-Davis' foul set the wheels in motion for a Northwestern victory, but plenty happened after then that could have absolved him of this mistake.

Here's the full win-probability graph, which should further help illustrate all of this.

The big spike in Northwestern's favor doesn't occur until after the Wildcats gained possession following LaChance's missed three. The Commodores were very much still in the game after Fisher-Davis' foul, and it was not the biggest turning point in the match.

Additionally, were it not for Fisher-Davis, Vanderbilt may not have had a lead to relinquish in the first place. He had 22 points on 7 of 15 shooting while hitting 3 of 8 from downtown. He had eight more points than anybody else on his team, and it helped finish as numberFire's runner-up MVP for the game. 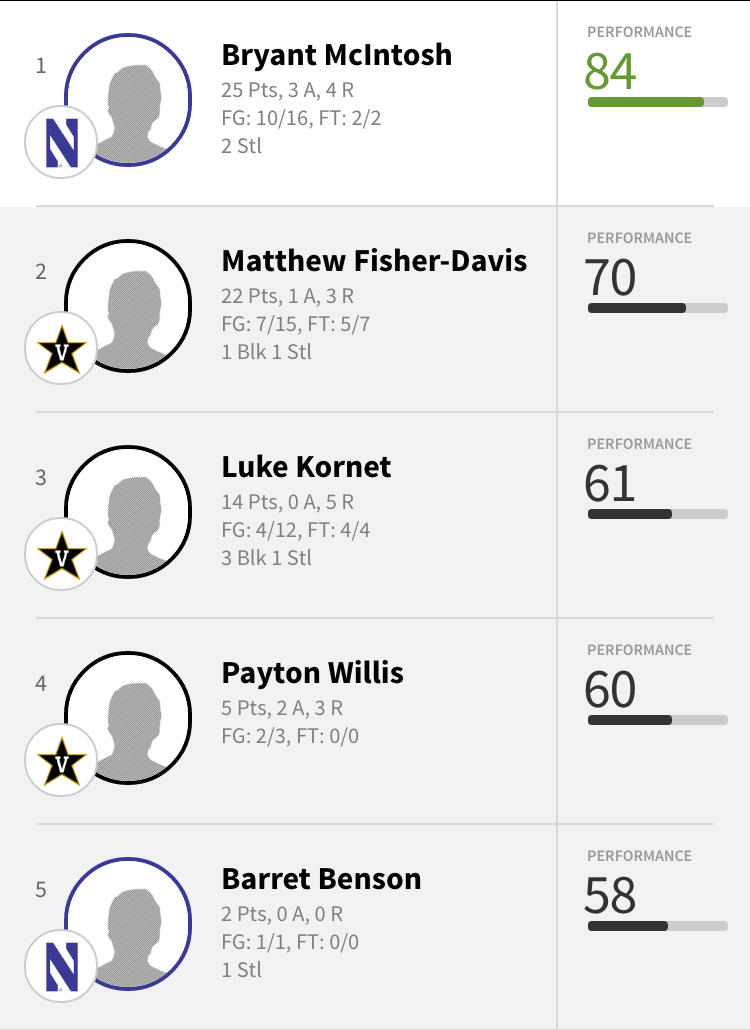 Fisher-Davis played a heck of a ballgame, and he helped Vanderbilt crawl out a 15-point, second-half hole.

He certainly did flub on the accidental foul, but that doesn't erase the good he did throughout the rest of the game. Hopefully he can take some solace in that once the dust settles from this tough defeat.

9 Things to Watch on Day 2 of the NCAA Tournament

Indiana's Firing of Tom Crean Is a Risky Move