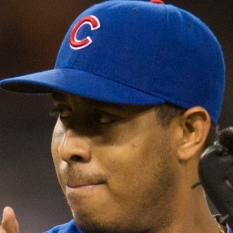 Rondon was not a part of the NLDS roster due to some concerns over his health. But, in the next round, he will step in for Justin Wilson, who has pitched just 2/3 of an inning in one postseason appearance to date. With the Cubs' opponent, the Los Angeles Dodgers, down a left-handed bat in Corey Seager, Rondon makes sense as a right-handed hurler.