My wife and I bought a Peloton bike for Christmas. And no, we didn't film one of those dumb ads. But we bought it, and we love it.

One of the coolest things about Peloton is that the workouts are data-driven, customized-to-you focused activity. Data, as many of the instructors, guides you on your path to most effectively getting to your goals.

That's what NFBC (National Fantasy Baseball Championship) ADP does as we get ready for our season-long fantasy baseball drafts. It shouldn't be your bible, but it can be your guide and ultimately show you where market inefficiencies lie. You can win your league with some savvy late-round picks.

If you owned Jon Berti of the Miami Marlins down the stretch last year, you were thrilled. Dude went on an absolute monster tear swiping bags down the stretch, nabbing nine bags in the final month of the year.

Now, part of the deflation of his draft-day cost is that he doesn't have a carved out role -- the illustrious duo of Miguel Rojas and Isan Diaz is slated to man the up-the-middle combo (per Roster Resource). But talent always seems to win out, and the multi-positional Berti can play a myriad of positions.

It's also interesting to point out that Berti has popped lefties well during his career. While he only covers 66 plate appearances in this split (small sample size warning), a 123 wRC+ isn't anything to shake a stick at.

With a premium placed on speed (only 15 players stole 20-plus bags last year), Berti is worth a late-round flyer.

If you are asking yourself who this guy is, let's give you a quick primer.

The Cincinnati Reds seem to be shoving their chips into the center of the table, and Shogo Akiyama could be a massive part of the equation. The 31-year-old outfielder played most recently for the Saitama Seibu Lions in the Nippon Professional Baseball league, and Akiyama was a beast. He set the single-season hit record in 2015 and was a five-time league All-Star.

Now, that's all fine and dandy, but it's hard to exactly figure out how it will translate to the MLB.

Here's what we do know. He owns a career .301 batting average and a .376 on-base percentage. Last season, he posted a healthy 20-homer, 12-steal combo. He's also durable, posting 650-plus plate appearances five seasons in a row. And Roster Resource tentatively has him slated into the leadoff spot.

Batting in front of Joey Votto, the newly-signed Nick Castellanos, and Mike Moustakas in a park that was 11th in park factor and 8th in home run factor, per ESPN, and Akiyama could be a draft-day steal.

Alright, it's time to admit it -- I am the conductor leading the Starlin Castro hype train, and everyone needs to get on board.

First, a word before you stop reading. Playing in one of the most pitcher-friendly environments last year in Miami, Castro popped 22 home runs. Alright, alright, alright. Now, peep the fact that in his new home stadium in Washington, he moves to the second-most hitter friendly environment for long balls. Don't believe me? Here's a chart overlay from our friends at Baseball Savant: 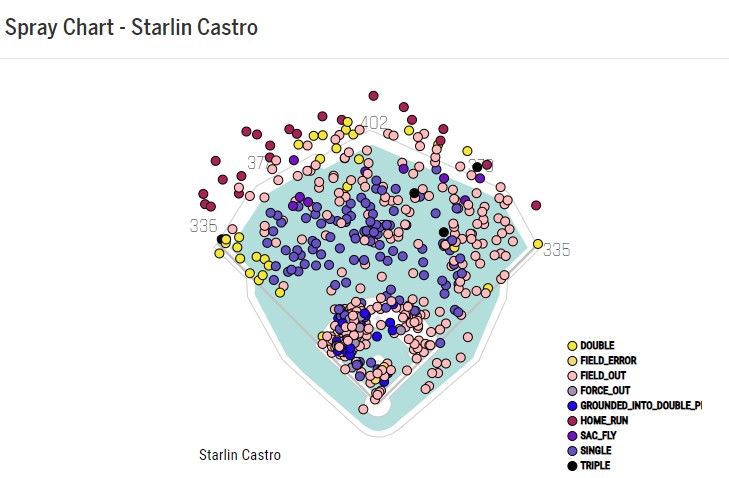 Castro may not be an outstanding pick in an OBP format since he rarely walks, but don't overlook the potential for 20-plus home run upside this season.

It's Sam Hilliard breakout time, and with an asset this cheap playing in Coors Field, this draft-day price is too juicy to pass up.

A year ago at this time, we were singing the praises of Ryan McMahon and Garrett Hampson, and both stunk up the joint. But Hilliard looks like the real deal, providing speed and pop.

The left-handed hitting outfielder has shown speed across all levels, stealing 20-plus bases at every level since his initial stop in rookie ball. That's good, but the power is what has really come along. Last season, Hilliard hit 35 home runs in Triple-A, and he followed that up with 7 home runs in his cup of coffee in the Majors.

What's even more exciting? The batted-ball data is as juicy as can be. Over 87 plate appearances, Hilliard popped a 13.0% barrel rate and 90.8 MPH exit velocity, so grab him while you can at a cheap price.

Despite some solid numbers for the 2019 season, it's hard to really understand how badly Kyle Gibson was affected by multiple illnesses after a mission trip a season ago.

After rocking a 3.62 ERA over 196 2/3 innings in 2018, Gibson took a bit of a step back, but his pitches showed some interesting data, including a change-up that induced the 11th-best swing rate on pitches outside the strike zone in all of baseball.

If he can return to health and stop throwing a poor fastball offering, Gibson could make for a very interesting back-of-the-rotation arm.