When the Cleveland Indians lost Michael Brantley for the beginning of, and eventually the entire 2016 season, there was a void in the Indians' offense. The Indians already were lacking offensively, and losing their best offensive player spelled trouble.

But in Brantley's absence, Jose Ramirez has stepped up in a breakout season for the Indians, proving to be one the the better hitters this season on the Indians' roster. He's in the midst of an 27-game on-base streak.

Francisco Lindor was expected regress a bit, as was Jason Kipnis, but with just under a week left in August, the Indians rank fifth in baseball in wRC+ and wOBA and fourth in runs scored.

And that is, in part, due to Ramirez stepping up in Brantley's absence. Ramirez was expected to be a utility man for the Indians this season, playing some in the outfield as well until Brantley returned, but instead, Ramirez has become one of the team's top hitters.

In fact, Ramirez has already basically equaled Brantley's ZiPS projections coming into the season, and that was before his go-ahead two-run homer against the Toronto Blue Jays on Sunday.

Ramirez has experienced a power surge at the plate, with a .150 ISO, a career high, as well as a .461 slugging percentage, also a career high, to go along with 10 home runs and 57 RBI.

At the plate, Ramirez is swinging more, a 43.9 swing rate, up from 40.3 percent last year, and hitting more line drives, an uptick of 8.3 percent in his line drive percentage, all leading to his surge in production at the plate.

He's also pulling the ball less and using all parts of the field with his opposite field percentage up 4.2 percent, per FanGraphs. 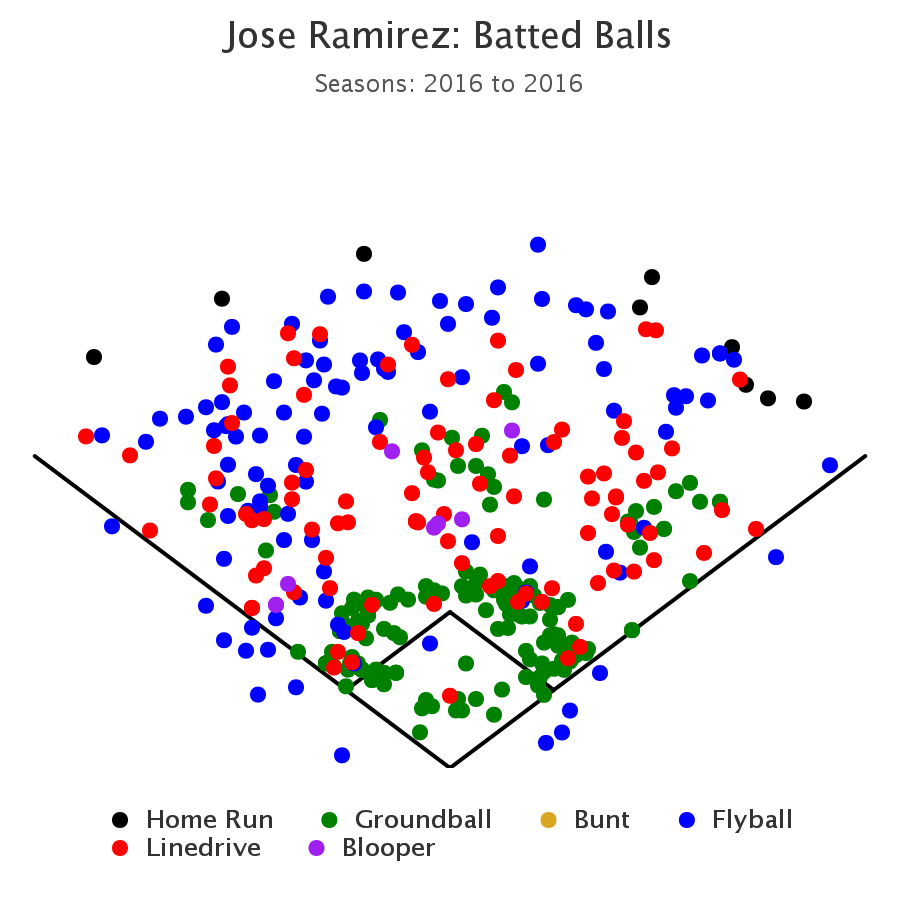 Finally, just like Brantley, Ramirez hasn't just done it at the plate but also added value in the field and on the basepaths. Ramirez is second in the American league, behind teammate Rajai Davis, in FanGraphs' base running stat (BsR) with 20 stolen bases in 26 attempts. And in the field, Ramirez as a 0.1 UZR at third and a -1.9 UZR in left.

Ramirez is also still a year away from arbitration, so the Indians and their front office have to be sitting pretty, knowing Ramirez, along with Lindor and Kipnis, will make up three-fourths of their infield for years to come.


As for this year, there is some reason to expect some late-season regression from Ramirez with his BABIP at a career-high .333, but with an increased line drive and hard hit percentage, there's reason to believe much of his improvement is here to stay.

Ramirez's best season has helped Cleveland jump out to a seven-game lead in the AL Central.

And if Ramirez can continue his hot-hitting, at the plate, especially with runners on base and in scoring position, the Indians will have a bat in the middle of their lineup that no pitcher will want to face come September and October. Their 15.5% chance to win the World Series is second in the Majors.