Fresh off the storied Open Championship, the PGA Tour heads to another Open: the 3M Open.

That means we're dealing with a course that has only twice hosted events at this level, TPC Twin Cities.

We’ve seen Michael Thompson win this thing virtually out of nowhere last summer, and in the initial run of the tournament, it was Matthew Wolff getting a win in his fourth PGA Tour start after missing a cut the week prior.

What have we learned from the past two years of data at TPC Twin Cities?

A 2018 renovation saw TPC Twin Cities get narrower fairways and more bunkering, but that hasn’t really made it tough by PGA Tour standards, as evidenced by winning scores near 20-under and under-par cut lines.

The distance puts it around 130 yards longer than the average par 71 on the PGA Tour, yet the green size is a bit bigger than the usual Tour stop. 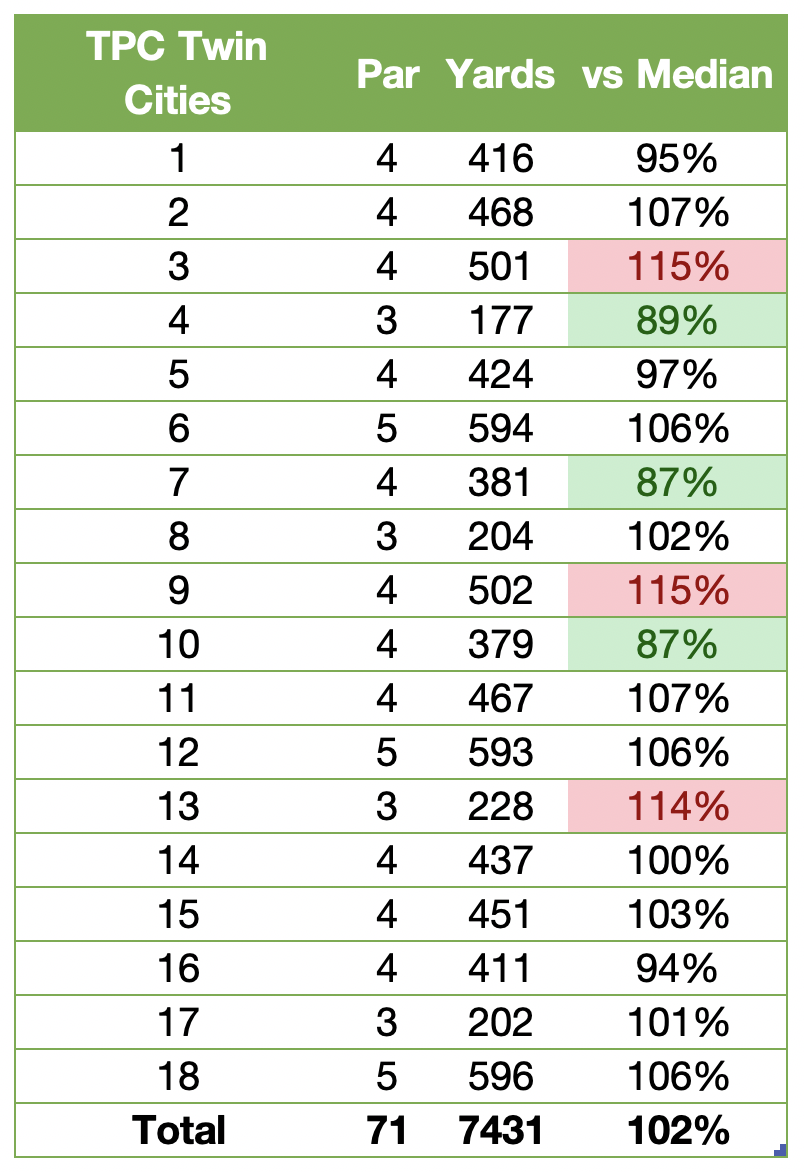 We have three holes rating out as at least 110% longer than the average hole of the same par and three that are 90% or shorter, so it’s a pretty balanced mix of par-based lengths.

Notably, two of the outlier short holes are par 4s around 380 yards, but there are two 500-yard par 4s as well.

Some other courses that can be categorized as average-to-long courses with average-to-large bentgrass greens include:

Eh, we shouldn't really use the Torrey Pines or Augusta comps given the importance of driving distance there that doesn't really exist at TPC Twin Cities. Two shorter (and two other TPC) tracks might actually look more comparable: TPC Deere Run and TPC River Highlands.

I don't usually rely heavily on comparable courses, but I just wanted to throw this out there for the week in case you find it more important, given the short sample at TPC Twin Cities.

We’ve seen a sizable shift in the importance of approach play at TPC Twin Cities.

It already explains nearly 35.0% of scoring dispersion on the average PGA Tour course, but at TPC Twin Cities, it's been 44.0%, according to datagolf.

Strokes gained: off the tee is also up to 19.2% from 15.1% on average. This shows early returns on ball-striking.

That de-emphasizes short game to a degree, and in a birdie-fest, we can always look to downplay strokes gained: around the green.

These golfers are in the field and have finished top-35 in both years at TPC Twin Cities:

These golfers have at least one top-10 at TPC Twin Cities: