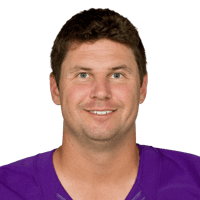 Hill will spend much of his time under center executing handoffs to Adrian Peterson. Hill appeared in nine games with the Los Angeles Rams in 2014, completing 63.3 percent of his throws with just eight touchdowns and seven interceptions. The Minneapolis Star-Tribune's Matt Vensel also opined that the Vikings don't think they can "get by" with Hill for 16 games. Vensel believes the Vikings will look outside the organization for another quarterback, though he does report the team "likes" the currently injured Taylor Heinicke, who is not expected to be able to practice for another three weeks. As for veteran options, the Vikings were one of the teams linked to Nick Foles this offseason, or they might try to pry Josh McCown away from the Cleveland Browns.

Among the 39 quarterbacks with at least 150 drop back in 2014, Hill's 0.01 Passing Net Expected Points per drop back ranked 29th while starting in eight games for the St. Louis Rams.