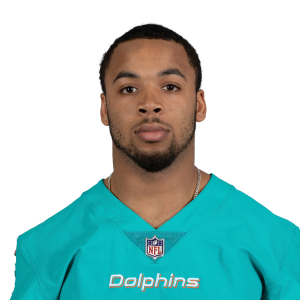 Miami Dolphins running back Myles Gaskin rushed 2 times for 3 yards and wasn't targeted in the passing game in a Week 4 loss to the Indianapolis Colts.

Gaskin averaged 9.0 carries and 5.3 targets in the first three games while logging a 55.4% offensive snap share, but his volume plummeted in Sunday's loss and played less than a quarter of Miami's snaps on offense. Malcolm Brown rushed eight times and drew a target while leading the backfield with a 67.3% snap share. Salvon Ahmed had three carries and was targeted twice on 9.6% of the offensive snaps. Gaskin went from a season-high workload in Week 3 to season-lows in Week 4, and now the Dolphins' next matchup is against an elite Tampa Bay Buccaneers front.

Gaskin averaged negative-0.36 Rushing Net Expected Points per carry on Sunday. Brown led the backfield with negative-0.22 and Ahmed was third with negative-0.61. The Buccaneers are allowing the fewest rushing yards per game and the seventh-fewest FanDuel points per game to the running back position.