Fantasy Baseball: Can Carlos Rodon Make the Leap in 2017?

There's plenty of hype surrounding many young MLB players, especially any of those with that first-round pedigree. When you're the National Freshman Pitcher of the Year and a Golden Spikes Award finalist as an 18-year-old, that hype train gets chugging even faster.

In the 2014 Amateur Draft, Carlos Rodon was selected fourth overall by the Chicago White Sox, and the chatter reached a new level when he made his Major League debut just a mere 10 months later.

The 2016 season marked Rodon's first full year as a major league starter -- he took the hill a career-high 26 times, and it was a bit of an up-and-down campaign. He finished with a 9-10 record over 165 innings pitched, and his 4.04 ERA is closely aligned with more advanced ERA estimators, such as Fielder Independent Pitching (FIP), which came in at 4.01.

Taking a glance at early average draft position (ADP) data over at NFBC, Rodon is the 54th starting pitcher off the board. Can Rodon take a big step forward in 2017 and become one of the game's great starting pitchers?

Rodon has had one major issue as a pitcher, and its his walk rate. A quick glance at his professional career reveals his struggles with command.

He did take strides toward significantly cutting down his walk rate last year, but still barely eclipsed the league average mark.

A deeper dive into Rodon's numbers reveals the root of his command issues -- first-pitch strikes. Take a look at him compared to some of the league leaders in this category, which includes 73 qualified pitchers from 2016.

While it's obvious Rodon lags far behind the top of the league, he ranked dead last among all starters. It's easy to rack up walks pretty quickly when you're consistently falling behind hitters. 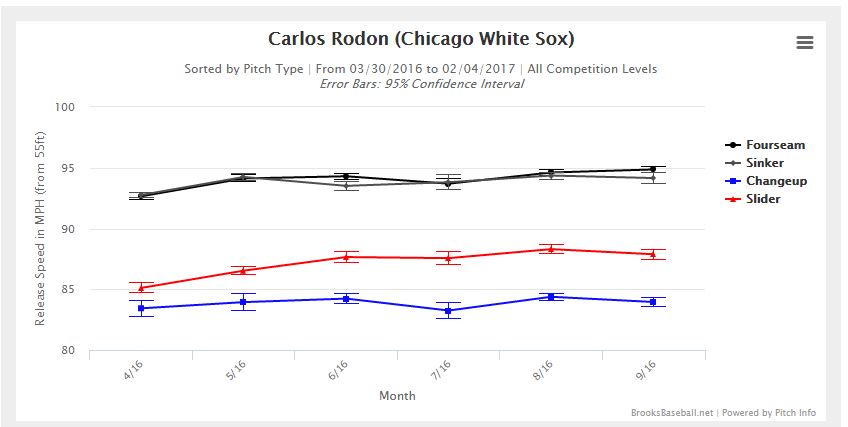 But while the velocity was fantastic, the results were less than stellar. Take a quick look at the numbers against Rodon's fastballs in 2016.

It's pretty obvious that these are some pretty poor numbers -- and as Paul Sporer points out, that OPS is the third-worst (behind Michael Pineda and Edinson Volquez) among the 51 pitchers who threw at least 1,500 fastballs. Among the 184 at-bats that ended on fastballs from Rodon in 2016, 24 resulted with a double, triple or a home run (.625 slugging percentage and .255 ISO).

For Rodon to make progress in 2017, his overall command must improve, but his four-seamer -- which he threw 63.7% of the time last year -- needs the most help.

A Tale of Two Halves

Rodon has shown some major struggles through his first two years in the big leagues, but he's flashed his ability to be among the top tier of starting pitchers by consistently having a strong second half. The below table shows how he's performed in the first and second half throughout his young career.

While the walk rate is still above league average, the strength in his remaining peripherals aren't anything to scoff at -- Rodon's 24.0% second-half whiff rate would've rank him 17th among qualified starters, and his 3.72 FIP would rank him 22nd.

Rodon certainly has some warts as he enters his age-24 season. With any young up-and-comer, it's easy to forget that excellence takes time. Not only is he about to start his third season in the bigs, but he's only accumulated 342.1 innings as a professional (304.1 in the majors).

His reduced walk rate from last season (specifically in August where it dropped to 5.7%), provides hope that he's starting to make strides with his command.

The repertoire is certainly there, and he is absolutely lethal to left-handed hitters -- he allowed only a .266 wOBA and struck out 27.8% of lefties last season. If he can at least improve to his 2015 batted-ball fastball numbers or even slightly better (.860 OPS on 1,480 fastballs), he's got major upside for fantasy owners in 2017 and beyond.