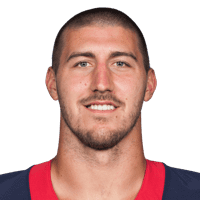 Houston Texans tight end C.J. Fiedorowicz caught six of his seven targets for 85 yards and a touchdown in the Week 6 win over the Indianapolis Colts.

Fiedorowicz scored the game-tying touchdown with under a minute in the fourth quarter. He's had at least seven targets the last two weeks and is the clear preferred option over Ryan Griffin.