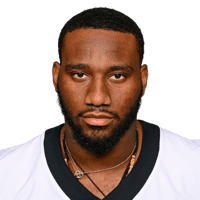 According to ESPN's Field Yates, the deal includes a base salary of $6 million with incentives worth up to an additional $4.5 million for Smith. Smith will now be sticking around with the team that drafted him for at least one more season.

Smith has yet to eclipse 500 receiving yards in a season since entering the league in 2018 despite operating as one of the team's top receivers for at least two of those seasons. The former third round pick won't offer much upside for fantasy for the 2022 NFL season.