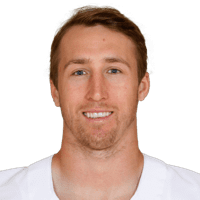 Sean Lee a healthy scratch for Dallas in Week 16

Dallas Cowboys linebacker Sean Lee will not play on Sunday in the team's Week 16 game against the Buccaneers.

Lee is reportedly fully recovered from his hamstring injury, but with his inability to play special teams and the emergence of Leighton Vander Esch, Lee's role has essentially vanished.

In six games this season, Lee has 18 tackles, one sack and one pass defended.