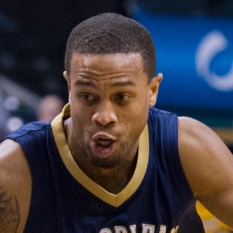 New Orleans Pelicans guard Bryce Dejean-Jones has been diagnosed with a fractured right wrist, and he is expected to miss the next six to eight weeks of action.

Dejean-Jones is scheduled to undergo surgery on Friday, and he can safely be cut in all leagues with this report. Alonzo Gee and Toney Douglas figure to see a bump in minutes sans Dejean-Jones, but neither guy makes for all that appealing of an add in standard leagues. Eric Gordon (finger) is getting close to a return, so he should be stashed everywhere as a guy with mid-round upside and zero competition for playing time.