Champions League Betting: Why Juventus and Liverpool Are the Best Bets to Win It All

Austan Kas  —  @AustanKas Mar 15th, 2019
Share on Facebook Share on Twitter
Liverpool and Juventus were the big winners of Friday's draw, getting friendly quarterfinal matchups, which boosted their title odds. Are any of the long shots worth gambling on?

This season's Champions League Round of 16 was a pretty wild one. Ajax dethroned three-time holders Real Madrid, Manchester United added another chapter to PSG's UCL misery, and Juventus knocked out Atletico Madrid via a historic, Cristiano Ronaldo-inspired comeback in the second leg.

We should be in store for more magic -- and VAR, whether you like it or not -- in the quarterfinals. Now that the matchups are set, let's take a look at which sides you should bet on to take home the famous trophy.

It's important to note that UEFA also held the semifinal draw in addition to the quarterfinal draw. So for the first time in a while, it's a set bracket from here on out, as opposed to holding a completely separate semifinal draw after the quarterfinals. That impacts betting odds in a significant way as we can see the likely path to the final for all eight remaining clubs. 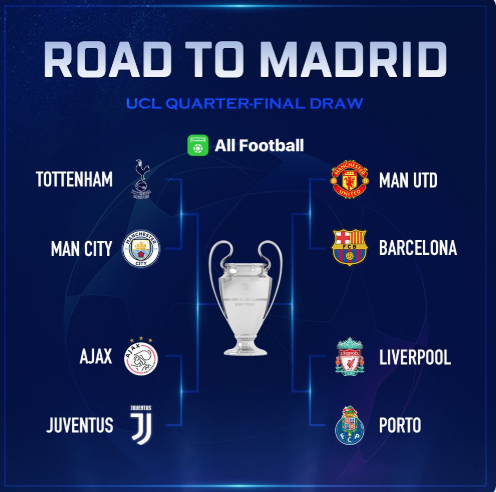 Here are the current odds for each team, per FanDuel Sportsbook, as well as their odds prior to the quarterfinal draw. Comparing the two can help us see how good the betting markets think these sides are in a vacuum and how much each team's odds have been impacted by the draw.

Prior to the quarterfinal draw, the final eight were split in half -- four clear favorites and four long shots. And then in the draw, the four favorites avoided each other in the quarterfinals, and all but one of the four big dogs (Barcelona) saw their title odds improve, with Liverpool and Juventus the biggest winners. If things go as they should -- which doesn't seem to happen much anymore in the UCL -- we would get a pair of stellar semifinal matchups.

On the contrary, the four long shots all saw their odds get worse, which wouldn't have been the case if two of the underdogs drew each other in the quarters. Porto, already the biggest underdog remaining, is now even more of a long shot, while Tottenham's arduous path resulted in their odds taking a significant hit.

Let's go through the eight sides -- splitting them up into the four favorites and the four underdogs -- and take a look at two teams from each group that you should bet on to win it all.