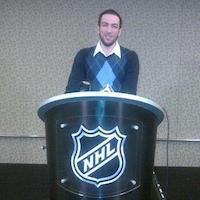 While they donâ€™t have a Stanley Cup to show for it, the New York Rangers have been one of the better NHL teams over the past decade. Theyâ€™ve made the playoffs every season since 2010-11, including three trips to the Eastern Conference Final and one appearance in the Stanley Cup Final.

Through those seasons, theyâ€™ve had a few constants, the most notable of which being all-world goaltender Henrik Lundqvist.

All that success makes how both Lundqvist and his Rangers have stated this season so striking. While no one expected them to be world beaters after last seasonâ€™s disappointing finish and the offseason trade of Derek Stepan and Antti Raanta, they were never supposed to win four of their first 13 games with Lundqvist giving up early goals seemingly every night. So whatâ€™s going wrong?

The first factor, although by no means the major one, is Lundqvist himself. While he hasnâ€™t completely fallen off a cliff yet, the goaltender isnâ€™t bailing out his team like he used to. His five-on-five save percentage of 91% isnâ€™t unprecedentedly awful and is actually .19% below his expected save percentage according to Corsica. For a goalie who never saved than less than 1% over expectations until last season, thatâ€™s a noticeable change.

While Lundqvist has let in a few weak goals this season, those will probably come out in the wash over a full season of starts. Itâ€™s quite possible that age is catching up with him, though. The Swede will turn 36 this spring and has made a living off playing incredibly deep in his crease and relying on his reflexes; if heâ€™s slowed down by even half a beat, that strategy wonâ€™t work as well anymore.

But, with all of that being said, his teammates, coaching staff, and front office arenâ€™t doing Lundqvist any favors.

The previously mentioned trade of Stepan and Raanta was motivated by financial concerns; the center carried a $6.5 million cap hit and his no-trade clause was set to kick in later in the summer. While that move allowed the Rangers to eventually sign Kevin Shattenkirk, it also left them with a void in their roster.

Stepan, who could play in any situation, often found himself playing the important minutes at both ends of the ice. With him now skating in Arizona, the Rangersâ€™ center depth consists of Mika Zibanejad, Kevin Hayes, J.T. Miller, David Desharnais, and the recently promoted Cristoval 'Boo' Nieves. While theyâ€™re perfectly capable players, none of them are really suited to play big minutes against the opposition's top line.

That reality, coupled with head coach Alain Vigneaultâ€™s counter attacking style of play and puzzling personnel decisions, are leaving the Rangers vulnerable. Based on Corsicaâ€™s shot faced statistics, Lundqvist is actually making more saves on high danger scoring chances (currently 86.96%) than he has in past seasons. Itâ€™s his medium danger save percentage -- currently 86.49% as opposed to his usual 92.00% -- thatâ€™s causing a problem.

Corsica classifies medium danger chances as shots with an expected goals value between 3% and 9%; those mostly fall between the face-off dots in the high slot. When you have defensemen jumping up in the offensive zone and lack a true defensive center, those spaces will get exploited over and over again.

The five goals the Rangers gave up to the Pittsburgh Penguins earlier this season are a perfect example of whatâ€™s going wrong. There are two odd-man rushes, two tap-ins in front of the net (one of which came from a defensive turnover) and one that Lundqvist should have stopped (even though it could have been avoided if Shattenkirk doesnâ€™t touch the puck). There's plenty of blame to go around.

And thatâ€™s the state the Rangers are in right now. Lundqvist might be starting to drop off in certain situations, but heâ€™s not giving up five soft goals every night; when push comes to shove, he still has the talent to be one of the better goalies in the NHL. He might not be bailing out his teammates as often as he used to, but the rest of the the club is forcing him to be pretty close to perfect every night.

It's easy to say that hockey is the ultimate team sport and blame should be spread equally around the Rangers; it should be just as easy, however, to say Henrik Lundqvist is getting hung out to dry.