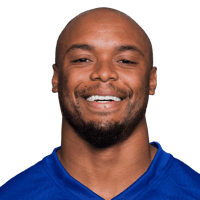 Vereen, 29, has more receiving yards (1,865) than rushing yards (1,489) through seven seasons in the league, but he's only found the end zone once over the past two campaigns (21 games). The Saints also signed Terrance West earlier this offseason and drafted Boston West in the sixth round, so Vereen may not be a lock to make the final roster behind Alvin Kamara and Mark Ingram. Trey Edmunds and Jonathan Williams are also in the mix.

Vereen finished with 417 scoreless yards on 45 carries and 44 receptions (53 targets) for the Giants last season.