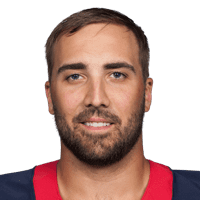 Houston Texans quarterback Tom Savage (concussion) is out for the rest of the season.

Savage suffered a concussion in Week 14, and as expected, he will be placed on injured reserve, effectively ending his season. T.J. Yates will be the Texans starting quarterback the rest of the season.