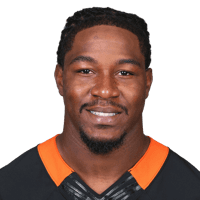 Moore came over from Oakland this offseason and will be reunited with offensive coordinator Hue Jackson. Moore has been unimpressive at Bengals OTAs and minicamp. He is currently slotted as the fifth wide receiver on the depth chart.

Even if Moore finds playing time due to injuries, he will be entering a passing offense that ranked outside the top-20 in the NFL in our Adjusted Passing Net Expected Points metric. We project Moore to be a non-factor fantasy player with four receptions and 55 yards this season.