Johnson will join the Giants after logging 58 games with the Tennessee Titans. The former second-round pick should play a part-time role for a New York defense that allowed 22.0 FanDuel points to running backs per game last season.

On 1,184 total career downs, Johnson has recorded a 2.4% Pressure Percentage and 4 tackles for a loss. 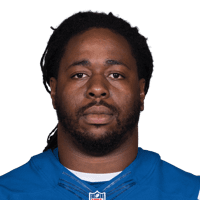