Golden Tate Could Be a PPR Superstar in Fantasy Football

Even after the retirement of Calvin Johnson, the Detroit Lions might have a wide receiver who can wind up a fantasy football superstar.

Our draft kit projects Golden Tate to finish as the WR22 in standard-scoring leagues, but when we convert this to points per reception (PPR) settings, he climbs all the way up to the sixth-highest fantasy scoring wide receiver for 2016.

Tate enters the new season in Detroit with the chance to capitalize on the perfect union of opportunity and volume that could see him finish as a PPR fantasy deity.

Following Calvin Johnson's departure, the Lions lost their most heavily-targeted wide receiver in years. Averaging nearly 160 targets per year over the past five seasons, Johnson was a target machine for quarterback Matthew Stafford. Add in the losses on offense of Lance Moore, Joique Bell, and Tim Wright, and we're look at a whopping 235 targets unaccounted for heading into this season.

Since Tate's arrival in 2014, he has seen 144 and 128 targets in his two years in Detroit. Clearly, Johnson was Stafford's preferred target, but Tate wasn't that far behind seeing target market shares of 23.5% and 20.3%.

Marvin Jones, who joined the team in free agency, should absorb a large percentage of Johnson's targets, but Jones only has one season of 100-plus targets under his belt. While Jones has had a highly efficient touchdown scoring rate, he and Tate aren't too far apart from a production standpoint.

We have yet to see Eric Ebron break out for this offense, averaging just five targets per game. In fact, our projections for this year have Ebron producing a nearly identical stat line to his sophomore year with 50 receptions, 533 receiving yards, and 4.8 touchdowns as a mid-range TE2.

Ebron could possibly see more looks near the goal line, but he only saw 11.1% of the team's red zone targets last season. Stafford preferred his wideouts closer to pay dirt with Tate seeing 23.6% of the red zone targets and Johnson seeing 22.2%.


Between Jones' lack of high-target history and Ebron still developing, Tate stands to benefit from Calvin's departure immensely if he can capture that top receiver role.

Volume up for Grabs

After taking over as offensive coordinator midway through the season, Jim Bob Cooter helped turn this offense into a formidable one. In their final eight games of the season, Stafford threw for 19 touchdowns and just a pair of interceptions. He completed 70% of his passes during that time period, often utilizing Tate, who saw an uptick in targets compared to the first half of the season.

Detroit beat reporters are claiming that it looks like Tate is due to become the, "unquestioned top dog among the Lions' pass catchers." Given that Cooter's offense is predicated on Stafford getting the ball out of his hands quickly, Tate should see a nice boost in volume.

Tate's average depth of target (aDOT) of 5.8 yards in 2015 was fourth-lowest in the league according to ProFootballFocus, complementing Cooter's philosophy.


Our projections have Tate finishing with 113.8 receptions. Only 10 players have recorded more receptions than that in the past decade.

Tate's 113.8 receptions are projected to be the third-most in the league, trailing only Antonio Brown and Julio Jones. When forecasting future fantasy outputs, it's important to keep a range of outcomes in mind.

If considering a normal range of distribution with 113.8 receptions as our median -- Tate led Detroit with 99 and 90 receptions the past two seasons -- could we see an even higher ceiling for Tate?

Tate has shown a penchant to be an incredible underneath and short receiver during his time with Detroit. Could he become more than that with Johnson now out of the picture?

Wide receiver guru Matt Harmon finds it difficult to believe Tate can replace Johnson, stating that his lack of success on "Nine" routes hampers his ceiling to get vertical. However, Harmon's evaluation also found that Tate had success in intermediate routes, posting above average success rates versus coverage running "Post" and "Dig" routes. If Stafford mixes up his short and intermediate throws, Tate could be in line for even more receptions in 2016.

And further along the best-case-scenario line, what if something happened to Jones?

If Jones goes down with an injury, we could see an even larger opportunity present itself for Tate. Look no further than how Tate's performed with Calvin Johnson out of the lineup: 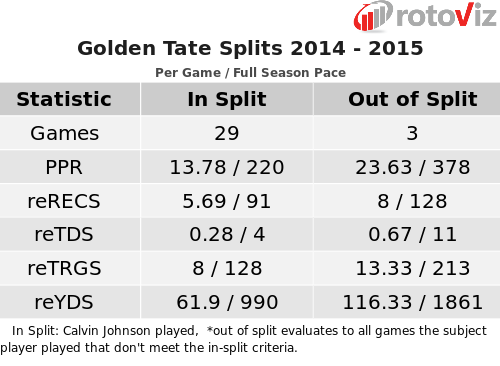 Granted its a small, three-game sample size, but Tate had no problems stepping up as the de facto number-one receiver, averaging 8 receptions for 116 yards and 0.67 touchdowns.

If Jones were to miss any time -- he missed six games his rookie season due to a torn MCL and all of 2014 with a fractured foot -- Tate could quite realistically reach the top of his range of outcomes.

It's not unreasonable to forecast Tate seeing a sizable jump in his targets and receive a decent portion of Johnson's vacated target market share.

The Lions are once again projected for a seven- or eight-win season after finishing 7-9 last year. That should one again lead to plenty of volume for the league's most pass-happy team (65.63%) in 2015.

Being labeled by some as a 1A-1B situation between Tate and Jones has suppressed both their values. Tate is currently being drafted in the middle of the third round, according to MyFantasyLeague, as the WR20 and at the third-to-fourth-round turn, according to FantasyFootballCalculator, at WR22.

If Tate is able to continue seeing his typical targets in addition to a decent portion of the vacated ones, he has the upside to surpass his current draft cost and finish as an elite PPR fantasy wide receiver.

The True Impact of PPR Scoring in Fantasy Football