Matt Blair  —  @grizzlyblair Jul 18th, 2016
Share on Facebook Share on Twitter
Ben Roethlisberger is coming off of a career year of sorts, which has led to him being overvalued. Here's why the Steelers' signal caller isn't worth the cost in 2016.

Ben Roethlisberger is currently being drafted ahead of Drew Brees, according to Fantasy Football Calculator. The discrepancy between the two is currently about five spots in the draft.

This may not sound like much, but to me, it's a colossal mistake.

Roethlisberger and Brees are about as guaranteed as it gets to make the Pro Football Hall of Fame after they hang up their cleats. Their talents are undeniable, but Brees has been a much more prolific fantasy football player over the years. 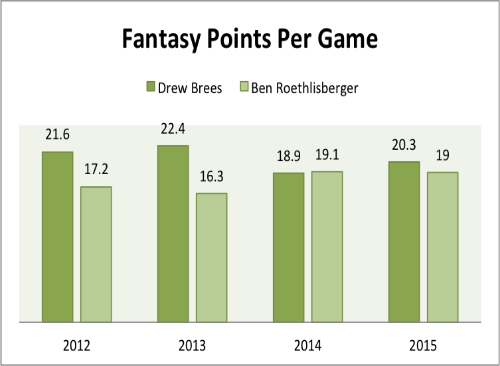 2012 was used as the starting point because that is when offensive coordinator Todd Haley joined the Steelers. Even after Roethlisberger's remarkable 2015 season, his points per game were still less than what Brees scored. The only time he was ahead of Brees was in 2014 and it was by 0.2 points.

Outside of recent history, another reason to downgrade Roethlisberger is the fact that he lost one of his most valuable weapons for the season.

Martavis Bryant has been suspended for the 2016 season for violating the league's substance-abuse policy. Even though the Steelers also have superstars Antonio Brown and Le'Veon Bell, Bryant's loss needs to be taken into account for Roethlisberger's success.

According to the Rotoviz Game Splits App, Roethlisberger has done worse without Bryant over the past two seasons.

Roethlisberger has averaged about 5.6 points less per game (STD) and his yards and touchdowns see a significant hit without Bryant. The Steelers are going to miss Bryant's elite athleticism and the ability to take it to the house on a simple passing route.

Losing Bryant is one thing, but getting Bell back may actually hurt Roethlisberger, as well.

Bell is returning after suffering a season-ending knee injury in 2015. He is known for his rare combination of rushing and receiving skills with the elusiveness that can top just about any running back. That being said, Roethlisberger has performed worse for fantasy purposes when Bell has been the starter.

The difference in fantasy points in minimal, and he is still averaging over 20 points per game when Bell plays. However, it should be noted that his pass attempts, yards per pass, passing touchdowns, and passing yards all decreased when Bell was the starter.

Heath Miller quietly rode off into the sunset after a wonderful 11-year career.

He played with Roethlisberger over the years, and they developed chemistry, especially in the red zone. Even while Miller was showing signs of age in his final season, Roethlisberger targeted him on a little over 17% of his red-zone passing attempts, which ranked third on the team. The Steelers signed Ladarius Green to replace Miller, but Green is still an unproven commodity, seeing just 122 targets through four seasons.

Healthy As An Ox

Outside of the changes in weapons, there's always a concern about health when it comes to Roethlisberger.

Roethlisberger is built like an ox, but he's had trouble staying healthy throughout his long career. In 2015, Roethlisberger missed several games due to an MCL sprain. He also was diagnosed with a concussion but did not miss any games. In the Wild Card Playoff game last season, he injured his shoulder and had to leave the game, missing several drives before returning.

His career has been filled with numerous injuries. As a comparison, Brees has not missed more than one game in a season since 2003.

Roethlisberger has the upside of leading the league in passing yards, like he did in 2014. Unfortunately, with an average draft position of fifth among quarterbacks, that upside is already baked into his price.

With other valuable options available later than Big Ben -- such as Brees, Carson Palmer, Eli Manning, and Philip Rivers -- it makes sense to target another solid wide receiver or running back instead of using a pick on Roethlisberger. If you're really looking for an great deal, you can wait around for Kirk Cousins, who has as much upside as anyone.