The Panthers' Secondary Can Still Succeed Without Josh Norman

On a path to the Super Bowl, the 2015 Carolina Panthers got above average play in just about every aspect of the game in 2015.

By our Net Expected Points (NEP) metric, which measures the value of each play on the field based on how an average team would be expected to perform according to historical data, the 2015 Panthers ranked outside of the top 10 in just one category: Adjusted Defensive Rushing NEP per play.

The best past of that team, though -- the one that had the league MVP in Cam Newton -- was the pass defense. The unit ranked second in Adjusted Defensive Passing NEP per play, behind only the Denver Broncos.

Heading into 2016, that secondary bares little resemblance to its 2015 version.

The top two cornerbacks to start the season -- Josh Norman and Charles Tillman -- are both gone. Tillman remains a free agent after his 2015 season ended with a torn ACL in Week 17. Norman, of course, is now with the Washington Redskins after his franchise tag was rescinded. Even Roman Harper has moved on after playing 86.5% of the teamâ€™s defensive snaps last season, the third-most for a defensive back on the team.

What this leaves is a fairly young secondary. Three of the five projected starters -- weâ€™ll consider the nickel a starter for this exercise -- were drafted in 2014 or later. They include 2014 fourth-round pick Bene Benwikere -- the seasoned vet of the group -- 2014 fourth-round pick Tre Boston, and 2016 second-round pick James Bradberry Thereâ€™s going to a lot of pressure on a lot of young players, even before considering the expectations placed on them due to last seasonâ€™s success.

But the Panthersâ€™ success in the secondary was not just because it was full of stars. Norman had his breakout season in 2015, but the other pieces werenâ€™t standouts on their own. Again, Roman Harper played the third-most snaps in the secondary. One consistent skill the Panthers did have really came from the coaches and the ability to get the most out of castoff veterans -- Harper, Tillman, Kurt Coleman and even Cortland Finnegan at the end of the year.

The Panthers have two things going for them that make it easier for those veteran defensive backs -- and theoretically the younger ones -- to excel in the defense.

The first is scheme. Now, this isnâ€™t to say relying heavily on zone coverage makes it easier on corners, an argument used this offseason to denounce the play of Norman, but the way Carolina schemes the entire defense helps the secondary work more as a cohesive unit.

It all starts up front.

In 2015, the Panthers were slightly above the league average in rushing the passer. Carolina was 12th in percentage of pass plays creating pressure and tied for 14th in sack rate at 6.3 percent (the league average was 6.1 percent). The Panthers did this by relying heavily on their front four to create pressure. Over the past three seasons, the Panthers have blitzed on roughly a quarter of their defensive plays against the pass, which places them in the bottom third of the league. This rush-four approach allows seven to drop into coverage, keeping the zone responsibilities of each defender slightly smaller.

Take a look at the following play from the NFC Conference Championship Game against the Arizona Cardinals, the number-one passing offense in the league by Adjusted NEP per play last season. On this play, the Panthers rush only four while the Cardinals keep in a tight end and a running back until he releases late on a delayed route.

With more players blocking than rushing, the Panthers donâ€™t get much pressure on Carson Palmer. The problem for the Cardinals, though, is down the field, there are only three receivers with seven defenders in coverage. By the time Andre Ellington released from his block and into the flat, Palmer had been in the pocket for more than five seconds.

With the first three options covered, he rushes the throw to Ellington and the pass falls incomplete. Itâ€™s like creating pressure without having to get to the quarterback. (Videos courtesy NFL Game Pass.)

Hereâ€™s the play frozen when Palmer gets to the top of his drop, ready to throw the ball. His pocket is completely clean, but thereâ€™s nowhere to go with the ball until Ellington releases as each receiver is instants away from being fully covered. 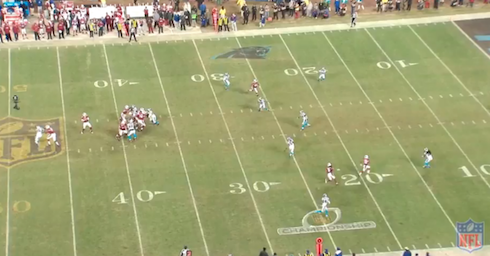 Carolinaâ€™s ability to use a four-man rush predominantly is twofold: the Panthers are able to get a decent rush with that front four at an above-league-average rate and the linebackers excel in pass coverage. This is paramount when dropping seven back into coverage and at the center of it all is Luke Kuechly.

There arguably isnâ€™t a better pass coverage linebacker in the game. Kuechly has the ability to cover sideline-to-sideline and can also run with players -- both tight ends and wide receivers -- down the seam. In 2015, Kuechly had 10 passes defended, which was the second-most of any linebacker behind Lavonte Davidâ€™s 13. Kuechly also had four interceptions, one more than Davidâ€™s three.

Kuechlyâ€™s ability to patrol to the intermediate middle of the field makes him like the short center fielder in a softball game. Balls that should normally be hits are outs because of this player who really isnâ€™t supposed to be there. Itâ€™s a similar thing when team try to pass in the middle with Kuechly defending.

Hereâ€™s one of Kuechlyâ€™s two interceptions during the Thanksgiving game against the Dallas Cowboys. Again the Panthers rush four, but even with the Cowboys sending out five receivers into routes, theyâ€™re mostly covered. Terrance Williams runs a post from the outside right of the formation to what should theoretically be a hole in the zone -- except Kuechly was reading the eyes of Tony Romo the whole play, leaves his zone covering the right end down the seam, and jumps Williamsâ€™ route for the interception and a touchdown.

Not many linebackers have both the awareness and ability to make that play. Then on the next offensive snap for the Cowboys, Kuechly stayed with Jason Witten down the seam and secured another interception. While it may not take as much athleticism with a dad runner like Witten, the tight end still has the ability to get open behind linebackers -- just ask the New York Giants.

With Thomas Davis and Shaq Thompson -- who some considered a safety before he was drafted in the first round in 2015 -- along with Kuechly, the Panthers have one of the most athletics groups of linebackers in the league. This wonâ€™t solve any problems of a young inexperienced secondary, but it will help.

Even with this scheme and these players set up to decrease the learning curve, the loss of Norman is still going to be felt.

He performed the tasks he was asked to do and did it better than just about every other corner in the league. Without him, the Panthers might not repeat as one of the leagueâ€™s best pass defenses in 2016, but there might not be as dramatic of a falloff as it may seem.