Tevin Coleman Is a Terrific Sleeper in Fantasy Football

Anthony Amico  —  @amicsta Jul 12th, 2016
Share on Facebook Share on Twitter
Devonta Freeman exploded last season, but Tevin Coleman did well with his limited touches. Can Coleman get enough volume to be fantasy relevant in 2016?

Every season there are second-year players we forget about because they failed to meet our expectations as rookies. Recently, I discussed Phillip Dorsett as one such player.

At running back, I think that Melvin Gordon is an easy candidate, but going even later in drafts is Tevin Coleman. The second-year Falcons' back is a terrific sleeper in 2016.

What Could Have Been

While Devonta Freeman is currently viewed as having a stranglehold on the running back touches in Atlanta, many people forget it was actually Coleman who opened the 2015 season as the starting running back. In fact, he received 20 carries in Week 1 to Freeman's 10.

But why does this matter? After all, Freeman has already shown to be the superior player right? 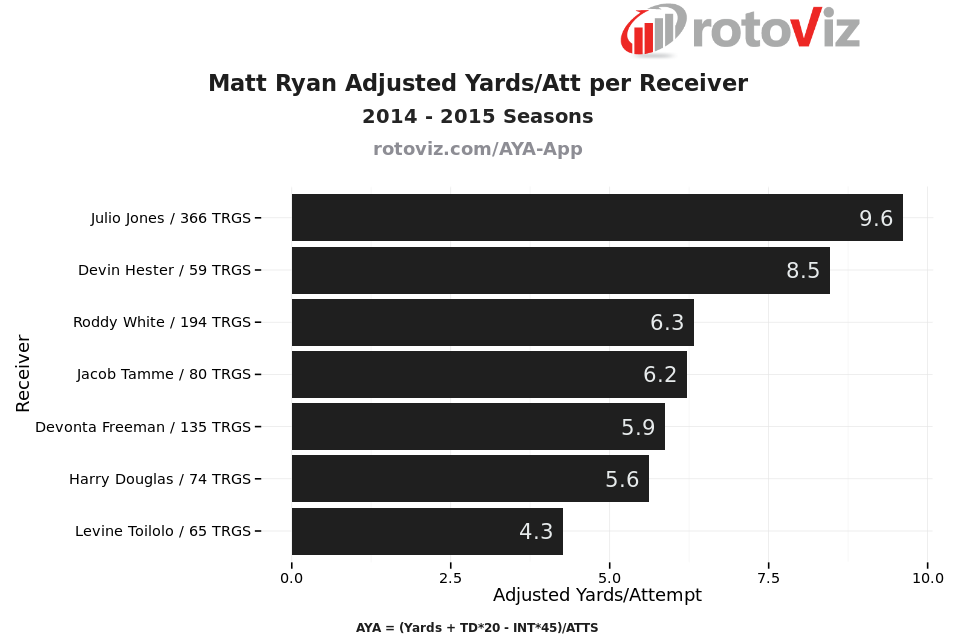 Looking at the RotoViz AYA App, we can see that Matt Ryan had an adjusted yards per attempt of just 5.9 while targeting Freeman. Take a look at how that compares to other running backs around the league.

Freeman looks like one of the least efficient receiving backs out there right now, and if that is his claim to fame, I have a hard time believing he holds off Coleman on an infinite timeline.

Let's also not forget just how good of a prospect Coleman was coming out of Indiana. Jamaal Charles was one of his top comparable players according to both RotoViz and Player Profiler. That isn't something to be taken lightly.

There's also this; just 7 running backs have rushed for 2,000 yards in a collegiate season and ran a 4.5 or better 40-yard dash. They are: Ladainian Tomlinson, Larry Johnson, Ray Rice, Matt Forte, Donald Brown, J.J. Arrington and Coleman. That is incredible company, and really speaks to Coleman's talent.

He also looks great when compared directly to Freeman. 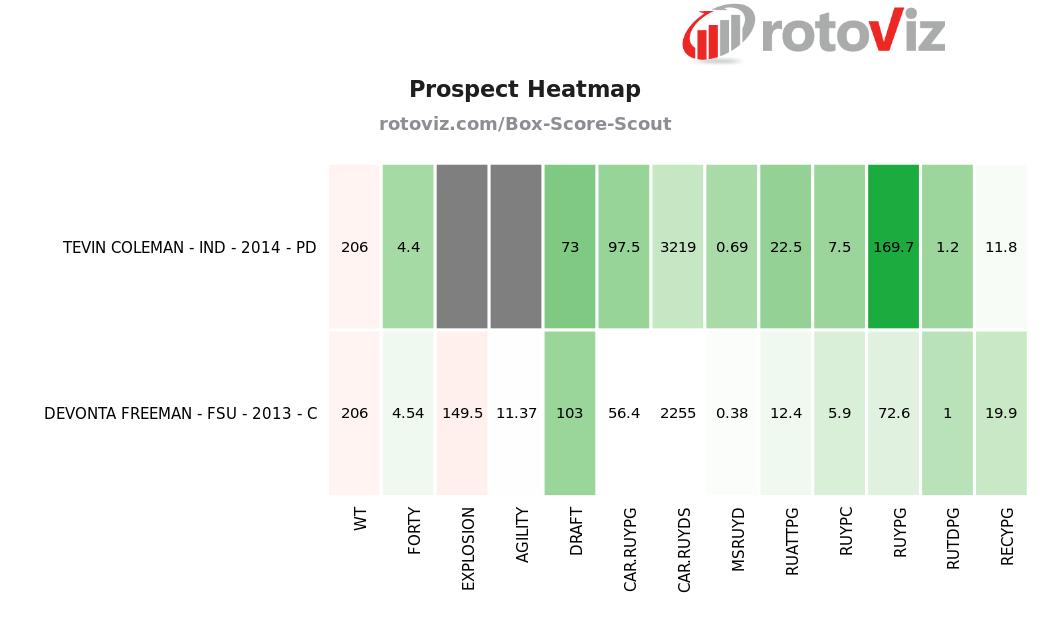 Coleman looks like the superior player in every way. Freeman was a slightly more productive collegiate receiver, but other than that, it isn't even close. It is also important to note that Coleman was taken with a higher draft pick and was chosen by the Falcons' current regime (Freeman was not).

The writing is already on the wall for Coleman to have a bigger role in 2016. Falcons' running backs coach Bobby Turner said the team wants to get the ball to Coleman more this season.

â€œWe want them competing,â€ Turner said. â€œThey are very similar. They both are competitive. They both can catch the football. They both have run instincts. When it comes down to it, the one difference is the flat out long speed of Tevin Coleman.â€


I'm not looking to dive too much into coachspeak this time of year, but this does seem to fit the data that shows us Coleman should at least be able to compete with Freeman -- if not overtake him -- this year.

It Won't Cost You Much

The best part about Coleman is that he is going much later than he was last year when he had an average draft position of RB21 on MyFantasyLeague. Now he is going as RB43.

Considering that Freeman has the trust of the Atlanta coaching staff, it would probably take an injury for Coleman to completely unseat Freeman. That said, even if Freeman plays all 16 games, Coleman may be able to earn a sizable role in the run game and potentially in the receiving game, as well.

Considering that Atlanta running backs compiled 455 touches in 2015, Coleman can absolutely be fantasy viable this year at a bargain price.