Thereâ€™s never really a dead moment in the NFL.

Even in the most dead period of the year when thereâ€™s nothing happening between OTAs and the opening of training camps, thereâ€™s still something. And late Wednesday afternoon, that something was the announcement of a new contract for Andrew Luck.

It all started innocently enough with a tweet from Colts owner Jim Irsay. No one likes breaking his own news more than Irsay, but the initial tweet did nothing more than state the inevitable extension had been agreed to and that Luck would be under contract through the 2021 season.

â€œLuckâ€ wasnâ€™t even mentioned, but by process of elimination thereâ€™s only one other Andrew currently on the Indianapolis roster, and thatâ€™s Andrew Williamson, an undrafted rookie safety. And itâ€™s safe to assume he wouldnâ€™t be signed for another six seasons.

Then came the waiting -- the waiting for the numbers took longer than it usually does with contracts of this magnitude, mostly because the owner was the first one to break the news.

But then the details started to emerge.

First it was that the five-year extension would pay him $75 million over the first three years -- thatâ€™s a record. Then Irsay got back in the reporting game, stating the total deal was for six years and $140 million -- also a record.

Finally the guarantees came out, and that was reported at $87 million -- another record.

Now, â€œguaranteeâ€ is still a flexible term, so all $87 million isn't going to be given at signing, but considering the previous record was shared by Eli Manning and Philip Rivers at $65 million, thereâ€™s some leeway between whatâ€™s currently reported and the record. The official word appears to be $44 million is guaranteed at signing, though. But the rest of the reported guaranteed still gets guaranteed at some later date, and it's going to be guaranteed because the Colts aren't cutting Andrew Luck before those dates come.

It was always expected Luck was going to sign the biggest contract in NFL history whenever the time came. Now that itâ€™s here and it happened, this is where the the argument about Luckâ€™s value comes into play. He's always had the potential to be the best quarterback in the league, and thatâ€™s still true, but his overall play on the field hasnâ€™t exactly backed that up, and this is where talking about Luck and his value gets tricky.

By our Net Expected Points (NEP) metric, Luck has only had one top-10 season on a per drop back basis, which came in 2014. In his other three seasons, heâ€™s been somewhere around average. Take a look at his numbers and ranking among quarterbacks with at least 100 drop backs in each of the past four seasons:

Now itâ€™s not exactly easy to be efficient with how the Colts offense has been set up, either. Matt Hasselbeck put up some great efficiency numbers last season in Luckâ€™s absence, but that was when the offense fundamentally changed to a dink and dunk passing attack. With Luck under center, the ball gets thrown deep down the field more often, but the way those plays are set up isn't always the best way to accomplish whatâ€™s set out to accomplish.

Itâ€™s even harder when playing injured, like Luck did for some of 2015.

The Colts like to send a couple receivers deep down the field, keep in seven blockers, and hope something good happens. Usually it doesnâ€™t. Hereâ€™s an example early in the game against the Carolina Panthers in Week 8. The Panthers had an outstanding defense last season -- they ranked second in schedule-adjusted Defensive NEP per play, behind only Denver -- so the Colts were going to have their hands full.

They line up with a single back and run play action. The back and one tight end, Dwayne Allen, stay in to block while T.Y. Hilton and Donte Moncrief run long-developing routes downfield. With neither getting open, Luckâ€™s only option is a dump off to Coby Fleener for a gain of three yards.

Now take a look at when Luck releases the ball, so conveniently behind the skycam. Fleener is still his only option after nothing opens down the field and still at the point of his release with seven men protecting on what turns into a six-man rush, thereâ€™s a linebacker in Luckâ€™s face. 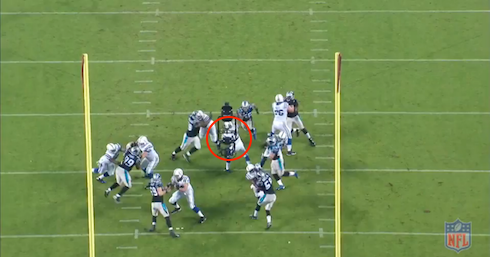 This doesnâ€™t explain all of Luckâ€™s struggles, but this should help explain some of what is consistently asked of him in this offense. This wasn't a rare occurrence when Luck was on the field in 2015, and the inclusion of some more quarterback-friendly routes probably could have helped Luck look a little better through these stats. It's not dissimilar to what Aaron Rodgers and Teddy Bridgewater saw in 2015. The quarterbacks aren't blameless, but they weren't always out in the best situation to get the most out of the offense.

For Luck, some of this also leads to other struggles by occasionally waiting too long in the pocket when it's clean -- or his decline in navigating pressure -- when he excelled in that area in past years. But, of course, when he has the chance, Luck can make some outstanding throws:

But itâ€™s always going to come back to that potential. The adage is, of course, that teams should pay for future performance, not whatâ€™s happened in the past. Weâ€™ve seen what Luck has done in the past, and itâ€™s been pretty good quarterback player, yet thereâ€™s still that potential to be even better.

Luck is set to average $25 million per year over the first three years of this deal. Thatâ€™s going to be the most given out to any player, but with a continually rising cap and the front-loaded nature of the deal, this isnâ€™t some massive overpay thatâ€™s going to hamper the Colts from building around their quarterback. Ryan Grigson and company have had enough problems with that on their own.

There will be 11 quarterbacks averaging more than $20 million per season entering 2016 -- Kirk Cousins and Ryan Tannehill just miss that, at over $19 million. We can get caught up in all these records, but around a $24 million average for Andrew Luck through his age-32 season in an era when quarterbacks are still playing at a high level at advanced ages isnâ€™t nearly as earth-shattering in that context. For a team so dependent on its quarterback to be good -- because at the moment not much else is -- it's really not that crazy at all.

Sure, Luck got paid a lot of money, and there are still some things heâ€™s going to have to fix with his game. Heâ€™s not perfect, but thereâ€™s still that chance he can get really close.