Rebuttal: We Need to Slow Our Roll With A.J. Green in Fantasy Football

Our own Jacob Gibbs just wrote an excellent piece where he suggested that A.J. Green is a way better fantasy football asset than you realize. It was smart, well thought out, and insightful.

I think that we're getting way to ahead of ourselves when it comes to Green. Here's why we need to slow our roll.

Jones and Sanu Won't Be Hard to Replace

The Bengals lost both Marvin Jones and Mohamed Sanu to free agency, and the pair accounted for 153 targets in 2015, leaving a huge hole in their passing game. Supposedly. As it stands, neither player is particularly impressive. Take a look at Jones' Net Expected Points (NEP) numbers -- you can read more about NEP in our glossary -- over his three full seasons as a pro.

Jones was a league-average wide receiver last season in terms of Reception NEP per target, doing so with well above-average quarterback play.

In fact, the only strong season Jones had came when he scored 10 touchdowns on just 80 targets, hardly a sustainable rate. He should not be particularly difficult to replace, and it just so happens that the Bengals have signed veteran receiver Brandon LaFell, who has had pretty similar numbers.

Outside of 2015, a season in which he missed the first five games of the season due to a foot injury, LaFell has posted similar numbers to Jones. It doesn't seem to be a stretch at all to say that he could replace Jones in some capacity, even if he doesn't match the 103 targets he had last season.

That brings me to Sanu.

Sanu is, again, a league average receiver, and probably below that when we consider he was below league average in Reception NEP per target in two of the last three seasons, never having a Success Rate -- the percentage of positive plays made per NEP -- over 82 percent (league average from 2000 to 2015 for receivers of at least 75 targets is about 85 percent).

Coming in to replace Sanu is second round draft pick Tyler Boyd, who is probably a better player than Sanu. Take a look: 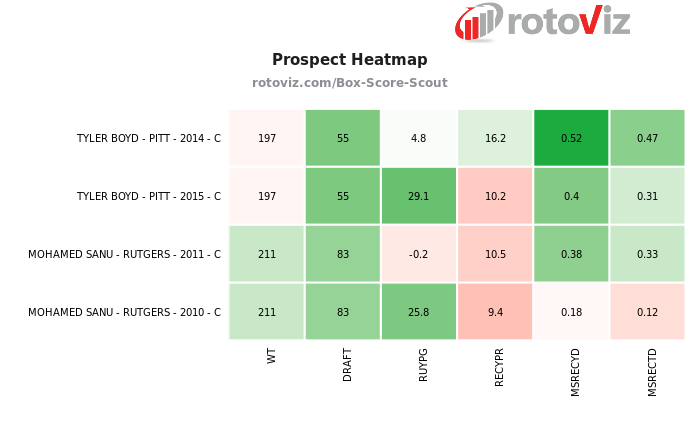 Boyd was a higher draft pick than Sanu and had a much better final two years in college. Since we know that production is everything in evaluating wide receiver prospects, it's fair to say that he was a better prospect than the former Scarlet Knight.

Does that mean he will necessarily be a better player? No, but as I've already stated, Sanu has not set the bar very high.

Because both Boyd and LaFell appear to be strong facsimiles of the players they are replacing, there shouldn't be many, if any, additional targets for Green as a result of their departure.

"But Anthony, you aren't accounting for the injury to Tyler Eifert!"

Yes, it's true that Eifert had ankle surgery and will be out for about three months. However, I'm not so sure this has any effect on Green's production. 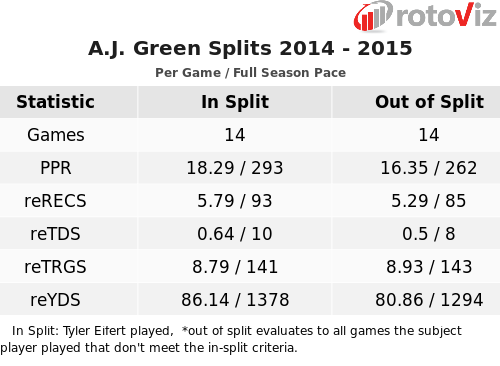 Over the last two seasons, Eifert has missed a total of 14 games, exactly as many as he has played. Green, though, has actually produced better in games in which Eifert has played. Furthermore, he has seen fewer than 0.2 additional targets with Eifert out.

The talented tight end's injury should not result in markedly more work or production for Green, even if he is forced to miss regular season games.

Green's Increased Efficiency Was Due to His Coach

Take a look at the yards per target for some recent Hue Jackson -- who's now departed -- WR1s with and without his offensive game-planning.

As you can see, every single one of Jackson's top wide receivers have been more efficient with him than without him, including Green.

We have no idea what kind of offense new offensive coordinator Ken Zampese will run, but it's fair to bet that Green's efficiency doesn't remain as high as it has been the last two seasons without Jackson's downfield play-calling.

Green finished 2015 as the WR8 in PPR leagues, and just WR13 in points per game. Right now, he's going as high as WR5 in recent best ball drafts. Add in the hype he's getting, and this is a player who is probably going to be a lock for the first round -- and probably earlier than initially thought -- of fantasy drafts come August.

But the data doesn't necessarily support such a large jump in production, and we might not want to project him for a market improvement from 2015. I'll be avoiding him at a rising price, and I advise you to do the same.