He finished with the fourth-highest fantasy point total among wide receivers, providing a great return on investment for fantasy owners.

That performance has people incredibly high on Robinson for 2016, and per MyFantasyLeague.com, he has the sixth-highest average draft position (ADP) among all players, going on average at pick 8.71, and as the fifth wide receiver off the board.

To justify that kind of price tag, you're counting on Robinson repeating his 2015 performance.

The issue there is that Robinson produced at a completely unsustainable clip last season.

Quarterback Blake Bortles is due for big-time touchdown regression, meaning there will be less to go around for the receivers, Robinson caught touchdowns at a staggering rate that he's incredibly unlikely to repeat, and the Jaguars' passing offense in general is a long shot to repeat their 2015 production.

I'm not here to tell you that Robinson isn't a great player, because he is, but to take Robinson in the first round, you're blindly ignoring how heavily the odds are against him having the kind of success needed to live up to that draft spot.

The NFL's Most Prolific Touchdown Scorer?

Let's ignore, for the moment, the idea that the Jaguars aren't one of the league's top passing offenses and that their finishing third in the league in passing touchdowns is a total anomaly and incredibly unlikely to be repeated.

We'll pretend, for now, that the Jaguars belong in the same conversation as offenses like the New England Patriots, which threw for only one more touchdown than the Jaguars, and the Arizona Cardinals and Carolina Panthers, both of whom had the same number of passing touchdowns as Jacksonville in 2015.

Allen Robinson's touchdown production last season was downright absurd. He scored a league-high 14 touchdowns, which in and of itself isn't unbelievable, but the rate at which he scored them was.

Robinson accounted for 35% of the touchdowns in the Jacksonville offense, and he scored 12 touchdowns on 22 red zone targets, good for a 54.44% red zone touchdown rate.

Let's put both of those numbers into some context.

These are the players with the most touchdowns in a season since 2000 and Robinson (whose 14 tied for 15th-most). This is not only a group of the most prolific touchdown scorers of the past 15 years (and Muhsin Muhammad), but it is also their best seasons.

And Robinson's share of the Jaguars' touchdowns in 2015 is even above average on this list. The total number of additional 14-plus touchdown seasons for the players on this list? Only four -- two each for Randy Moss and Terrell Owens.

Now, let's take a look at the most efficient red zone threats of the past five years (minimum 25 targets).

Despite recording zero touchdowns on five red zone targets his rookie year, Robinson's 2015 was still efficient enough that he ranks second among the 45 qualifying players, while also ranking first among receivers.

The average among that top 10 is 41.49%, nearly 13% lower than what Robinson managed last year. A sample size of one season and 22 targets shouldn't be enough for you to crown him the league's premier red zone threat: a drop in efficiency is nearly inevitable.

Robinson's 22 red zone targets in 2015 were the sixth-most among wide receivers, and unless you somehow expect that number to increase drastically, you'd be banking on Robinson being a historically good red zone threat.

And did you happen to notice that name at the top of the list? Julius Thomas? Robinson plays alongside a guy who has done it over a a sample size nearly twice as large -- even more reason to worry about the direction that 35% share of the team's touchdowns will go.

Factors Outside of Robinson's Control

There's a lot that goes into fantasy football value beyond the skill of an NFL player.

Production in the NFL is dependent on so many moving parts all at once, which is one of the reasons it's so difficult to truly evaluate how "good" a player is. Some of these moving parts are more obvious than others.

For a receiver like Robinson, one thing that's obviously going to have an impact on his production is the play of his quarterback.

In 2015, Blake Bortles was tied for second in the league in passing touchdowns. Again, JJ Zachariason already broke down why Bortles is bound to throw for fewer touchdowns in 2016, and he did such a great job summing it up that you're best served to go read the whole thing, but I'll touch on a few important factors.

He also had the least efficient 35-plus touchdown season in the last five years, by a significant margin, and quarterbacks who throw touchdowns at as high a rate as Bortles did in 2015 (5.78%), rarely see improvement in the following season.

The Jaguars had the fourth-highest red zone pass-to-run ratio in 2015, something that's not unusual for their offensive coordinator Greg Olson, but the sheer volume of red zone plays they ran was much higher than expected and another part of why they threw for such an unsustainable number of touchdowns.

Here's a look at how team's schedule-adjusted Net Expected Points (NEP) per play compare to their number of red zone plays run over the past five seasons. 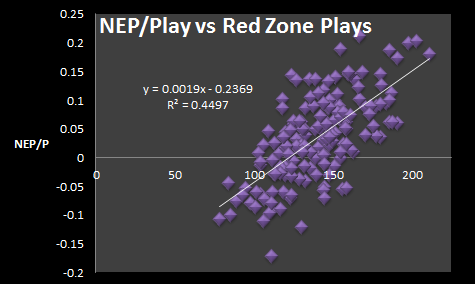 It shouldn't really come as much of a surprise, but in general, the more efficient an offense, the more plays they run in the red zone. The Jaguars ranked 26th in NEP per play but ran 155 red zone plays, the 7th-most in the league.

Even if they remain among the league's most pass-heavy teams when they're deep in opposing territory in 2016, it will likely take a huge increase in offensive efficiency if they want to run as many red zone plays as they did in 2015.

With Robinson's share of the team touchdowns and red zone efficiency above sustainable levels, a dip in Bortles' touchdown numbers and being on the field for fewer red zone plays can only spell trouble for his fantasy production.

What This Means for Fantasy Football

Like I said at the top, Robinson is being drafted as a first-round fantasy pick -- as the fifth receiver off the board.

It is always going to take some good fortune to have a huge fantasy season like that, and only seven receivers have posted 200-plus fantasy points more than once in the last five years. There are no truly "safe" bets for top-five fantasy scoring, but we can certainly look at the numbers and flesh out varying degrees of safety.

Robinson may excite you. Maybe he was a sleeper who carried you to a championship last year, or maybe you missed Robinson in the draft and it haunted you for the whole season, but there is no avoiding the fact that his 2015 production was hugely improbable.

Unless you're banking on his being one of the most dominant receivers the league has ever seen (or on Blake Bortles being really, really good), there's no way he should be in play with your first-round pick this year.