Corey Coleman Is the Best Wide Receiver on the Cleveland Browns

Jordan Hoover  —  @jhoover9787 Apr 29th, 2016
Share on Facebook Share on Twitter
Now a member of the Cleveland Browns as the first wide receiver off the board, what can we expect for Corey Coleman in 2016?

Corey Coleman is arguably the most explosive wide receiver in the 2016 draft class. 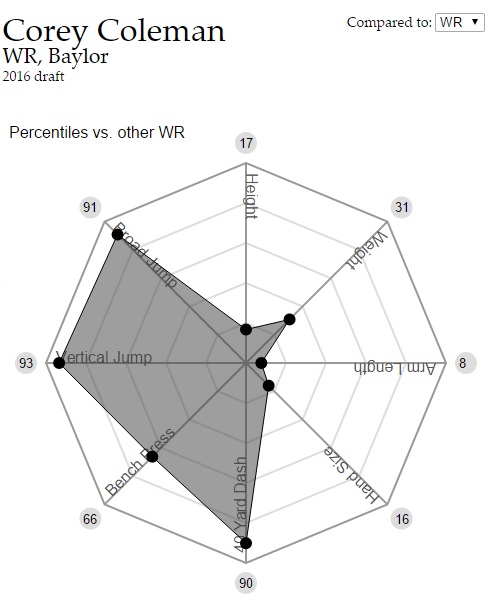 Itâ€™s true that Coleman lacks the prototypical size of an outside receiver, but so did his closest NFL comparable according to Player Profiler, some guy named Odell Beckham. And while I wouldn't bank on the same type of meteoric rise for Coleman as we saw with Odell Beckham during his first two seasons, the combination of his physical gifts and demonstrated production allows us to make the loose comparison and paint an optimistic picture for Coleman's future.

Itâ€™s also true that Coleman wasn't tasked with a nuanced set of routes while at Baylor, relying mostly on curls and nine routes.

But as Matt Harmon noted in his Reception Perception study of this draft class, â€œColemanâ€™s 80 percent SRVC against zone illustrates a positive attribute in his scouting report that rarely gets recognized. Baylor asks their receivers to read much of the coverage to the same degree their quarterbacks do. The draft community undersells Coleman for his intelligence and timing as a player.â€

And if you're into premier collegiate production, look no further:

How will his skills translate as the newest member of the Cleveland Browns?

First off, just taking a glance at the current Browns' depth chart at wide receiver, you can see why Coleman is walking into a very exploitable situation.

No offense to Andrew Hawkins or Brian Hartline, but Coleman immediately becomes the most talented wide receiver on the roster. He doesn't fit the big-bodied prototype that the team is missing, but as we saw during his time at Baylor, Coleman is more than capable of playing on the outside,

The only kink here is the Browns' quarterback situation.

Josh McCown may be on his way out of town, meaning Robert Griffin III would be the one to take the reigns unless a rookie is brought in. Jim Sannes made the case for the Browns taking a shot on Griffin, but it's yet to be determined how it will work out.

From a fantasy standpoint, Coleman's dynasty average draft position could jump in the next few weeks because of him being the first wide receiver chosen, but he was always going to be expensive.

With the lack of talent and depth in Cleveland, there's no reason why Coleman can't see 100 or more targets in 2016. The only question is, who will be delivering those targets and will they be quality opportunities?