Super Bowl 50: Is There Anything to Learn From Carolina's Week 16 Loss to Atlanta?

Dan Pizzuta  —  @DanPizzuta Feb 2nd, 2016
Share on Facebook Share on Twitter
The Denver Broncos could take some tips from the Atlanta Falcons for Super Bowl 50, as the Falcons were the only team to beat the Carolina Panthers this year.

On the surface, what clearly stands out as impressive for this year's Carolina Panthers team is the 15 regular season wins -- they're just the sixth team in the modern era to get through a 16-game regular season with one loss.

That single loss came in Week 16 against the Atlanta Falcons in a tightly contested 20-13 game.

While we can sometimes overstate the creation of a â€œblueprintâ€ on how to beat a top team after they fall, thereâ€™s really not a whole lot for us to go with when looking at how you beat the Panthers. Itâ€™s only happened once so, blueprint or not, itâ€™s what weâ€™ve got.

What we can do here, though, is go back to see if thereâ€™s anything to learn from the Falcons' victory back in Week 16, and whether or not the Broncos could replicate that performance during Super Bowl 50.

When Panthers Have the Ball

The game against Atlanta was easily Cam Newton's worst of the season by our Net Expected Points (NEP) metric. NEP, for the uninitiated, measures the value of each play on the field based on how an average team would be expected to score in each scenario using historical data. Newton threw no touchdowns, but also threw no interceptions and was worth -13.34 NEP during the game. Newton only had two other games this year with negative passing value: Week 4 against Tampa Bay and Week 7 against Philadelphia.

The Panthers started off the game strong with an 11-play, 80-yard drive, capped of with an eight-yard touchdown run from the quarterback.

After that drive, Carolina was unable to do much on offense both through the air and on the ground. They were missing Jonathan Stewart in the run game, relying on a combination of Cameron Artis-Payne and Fozzy Whittaker, who combined for just 10 carries. Artis-Payne led the way with 2.40 Rushing NEP on the ground, but 2.21 of that came from a 31-yard run in the second quarter. Outside of that run, Artis-Payne had four carries for 18 yards and 0.21 NEP -- nothing special.

For the record, the Broncos finished the season ranked fifth against the run by Adjusted NEP per play, well above the Falconsâ€™ final ranking of 19th.

Carolina was forced to get most of the production through the air, but Atlanta was able to slow that down, too. The Panthers were around league average -- tied for 16th -- in pass plays over 20 yards during the regular season. Carolina had 53 such plays during the year, and Atlanta was generally good at stopping them from going deep in this contest. It should be noted that Denverâ€™s defense was the best at avoiding overall plays of 20 or more yards, second best against the pass by just one play.

Atlanta pulled this off with a mix of pressure and great coverage -- two areas in which the Denver defense happens to excel. After giving up a touchdown on the opening drive and two first downs on the next possession, the Falconsâ€™ defense tightened up and set the tone for the remainder of the game.

On first down, the Falcons got some interior pressure with tackle Ra'Shede Hageman plowing through left guard Andrew Norwell, rushing a deep throw to Ed Dickson.

Atlanta brought an extra rusher on the next play, which forced Newton to abandon the pocket and throw the ball away due to tight coverage down the field.

Third down brought just three rushers from the Falcons, but enough interior pressure was brought -- even through a triple team -- Newton felt the need to sling the ball down field instead of stepping up in the pocket for a more accurate throw.

This sequence of plays is strikingly similar to the game plan used by the Broncos to stop the Patriots in the AFC Championship game, mixing the number of pass rushers against Tom Brady and finding success getting pressure and forcing bad throws when sending only three.

Despite the pressure, Newton only took two sacks during the game. Even as a mobile quarterback, he has been able to decrease his sack rate this season to a career low 6.2 percent, the first time heâ€™s been at the league average in that statistic during his career. One of the sacks came on Carolinaâ€™s last drive of the game, when Vic Beasley blew past Michael Oher for a strip sack, which caused a turnover to clinch the game for the Falcons.

The first sack of the game was a coverage sack late in the first half. On the play, Atlanta brings a standard four-man rush, but at the top of Newtonâ€™s drop, there's no receiver open which allows enough time for the rush to get to the quarterback. This may be what the Broncos will need their pressure to look like, and they have both the rush and coverage to pull it off.

Again, it's important to note that Denver was the best defense this season by Adjusted NEP per play overall and against the pass.

While the defenses of the Falcons and Broncos can look somewhat similar -- at least in terms of this game -- the offenses of the two teams couldn't be more dissimilar. Atlanta was around league average overall by Adjusted NEP per play (15th), and ranked 11th through the air. Denver, on the other hand, was 28th overall and 25th for the pass.

One thing Denver could emulate, though, is Atlantaâ€™s ability to work the middle of the field through slants and post routes. When Carolina lined up with a single-high safety, Atlanta was ready with plays to freeze the safety before committing to a receiver. Take this play from the third quarter, which ended up as a 16-yard gain by Roddy White.

Kurt Coleman is the lone deep safety with Roman Harper creeping up to the line of scrimmage. The play is designed to have tight end Jacob Tamme run up the seam, and White run a post from the left side of the formation. Both players entering the middle of the field hang up Coleman just long enough for him not to get to either route and White is open once he beats his man inside. 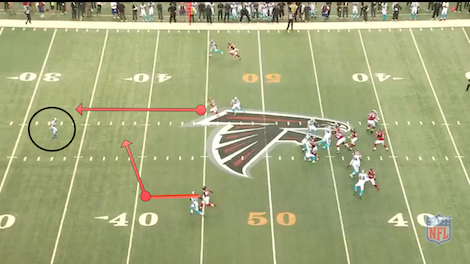 This type of work in the middle of the field may be what Peyton Manning and the Broncos need. During the regular season, only three teams -- Dallas, Minnesota and St. Louis -- had fewer pass plays of 20 or more yards than Denver. Mixing Demaryius Thomas, Emmanuel Sanders and Owen Daniels could help the Broncos move the ball down the field.

Because of the differences in offense, the Broncos will be much more likely to replicate the Falconsâ€™ defensive performance than what Atlanta did with the ball. Whether they follow that same time of game plan is unknown, but we can safely assume this isnâ€™t going to happen again: