The Denver Broncos struggled on offense this season by just about every measure: the eye test, traditional stats, advanced stats.

And because their defense carried them to the Super Bowl, this underperforming offense will get a crack at a championship trophy.

And by "underperforming," I mean the worst offense to play in a Super Bowl game since and including 2000.

Now, before you rage-exit this tab or window because you're sitting there thinking, "Yeah, this offense is worse than Jake Delhomme's 2003 Panthers and Rex Grossman's 2006 Bears?" just stick with me.

The NFL has changed, and offenses have benefitted from myriad changes. On top of that, points scored and yards gained don't always paint a clear picture of how good an offense is.

But if we adjust for offensive success each year, adjust for schedule strength, and use our  Net Expected Points (NEP) metric to look at how a team fared above or below expectation level, that gives us a solid base for such claims.

And if we do that, we can see that Denver's offense is, to put it mildly, not good in comparison to their Super Bowl peers.

This year, the Broncos posted an Adjusted NEP score of -15.48. That means, after adjusting for opponent strength, the team lost more than 15 points of expected scoring throughout the season.

In order for that number to mean anything to you, here's some context. The Broncos ranked 30th in the league by this metric, and the average Adjusted NEP among NFL teams this season was 63.54.

Carolina, their Super Bowl opponent, posted a score of 127.35, which ranked seventh in the league. Sure, their schedule wasn't tough, but this adjusts for opponents.

So, we know that Denver's offense was bad for this year, but here's where things get worse.

How, then is Denver worse? 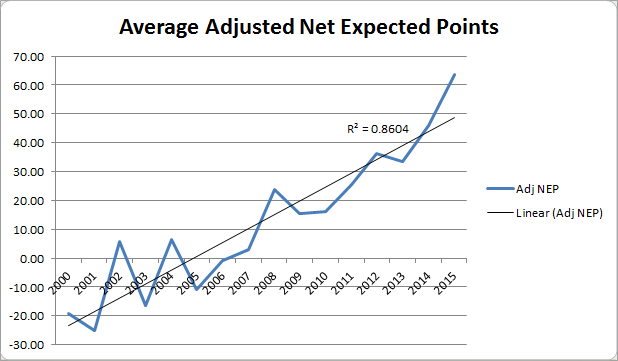 In order to adjust for this, we need context for each Super Bowl offense. That will come from the season during which they played. We'll figure out the standard deviation from the Adjusted NEP scores in that given year and see how far teams performed above or below the mean.

For Denver, it's not pretty. 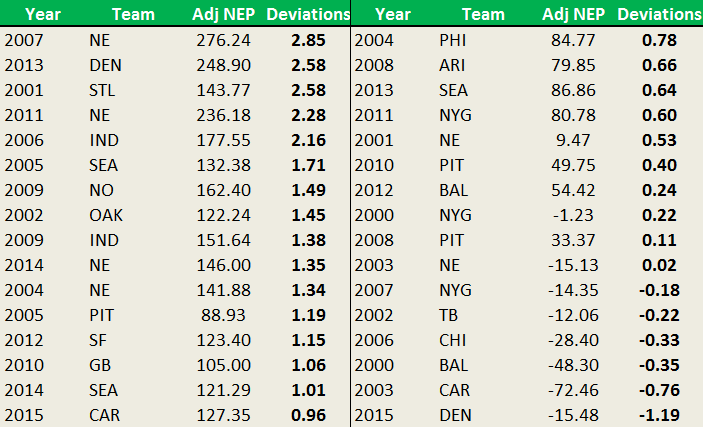 Denver's offense was a big step behind the rest of the NFL this year, making it the weakest offense relative to other teams that same season to appear in a Super Bowl in the NEP era.

It's not particularly close.

Two quirky additions to that: Denver's 2013 passing offense was 2.88 standard deviations above the mean, the best mark of all Super Bowl squads, and their current offense was 0.88 below the mean. Also, Carolina's passing offense finished just 0.27 standard deviations above the mean this season, the 25th-best mark of the 32 squads.

The 2015 Panthers' Adjusted Rushing NEP of 31.51 is fifth best in the group and their mark of 1.50 standard deviations above the mean is also fifth best.

The overall difference between Carolina's Adjusted NEP of 127.35 and Denver's -15.48 (142.83) makes it the fifth-biggest gap between NEP scores in these 16 Super Bowl matchups.

And we all know how that one turned out.