Should We Be Worried That Danny Woodhead Will Limit Melvin Gordon's Upside?

Growing up in San Diego, I've followed the Chargers nearly my entire life.

So on the first night of the 2015 NFL Draft, with San Diego letting Ryan Mathews walk in free agency, I was at home watching intently to see which of the talented tailbacks from this heralded rookie class the Chargers would select as his replacement.

The consensus top-ranked tailback, Todd Gurley, had just been selected by the St. Louis Rams with the number 10 overall pick; then suddenly, my Twitter feed exploded. San Diego had traded with San Francisco to move up from the number 17 pick to number 15.

And the one thought going through my head the entire time was: "It's happening. We're getting Melvin Gordon."

Gordon's selection as the heir apparent to LaDainian Tomlinson's running back throne in San Diego was an obvious decision. An unstoppable, ankle-breaking tailback in college, Gordon himself who broke Tomlinson's NCAA FBS single-game rushing record of 406 yards against UTEP, running all over Nebraska's once vaunted run defense to the tune of 408 yards in just three quarters of play.

But since his arrival in Southern California, not everything has been smooth sailing for Gordon in his quest for three-down back status with his team.

Going through the typical growing pains of a rookie tailback in the league, as we'll soon see, the return of veteran back Danny Woodhead to the active roster complicates matters for the Chargers backfield as far as workload distribution is concerned and limits Gordon's upside for this year.

A Running Back By Committee In San Diego

To get an idea of how the Chargers might split the workload between their lead back in Gordon and change-of-pace back in Danny Woodhead, it's helpful to start by looking at the running back usage by this coaching staff in 2013, the last year former early-down back Mathews and Woodhead played a full, healthy season together. 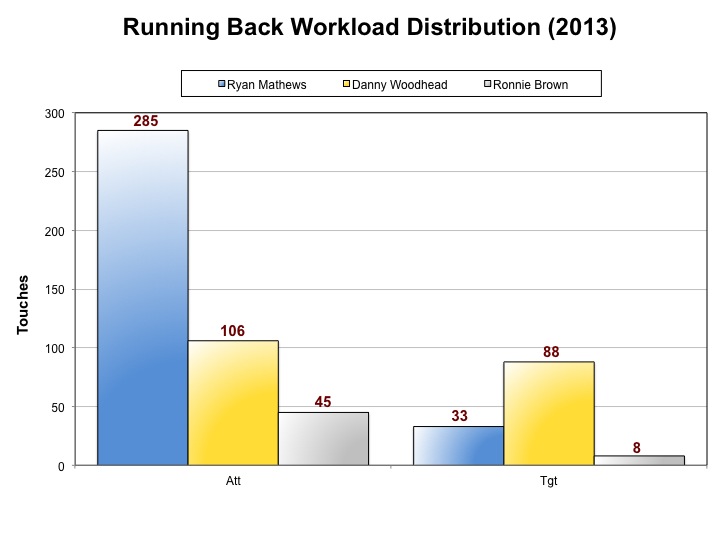 We see that while Woodhead did earn a healthy dose of touches himself in both the running and passing game, Mathews was still the clear leader in total touches by far.

That year, Mathews combined rush attempts and targets (318) actually gave him the eighth highest total among all running backs that year. Yet, he still finished as just the 12th-best back in standard-scoring fantasy football leagues.

The difference? Their usage in the passing game and red zone, which is Woodhead's bread and butter. 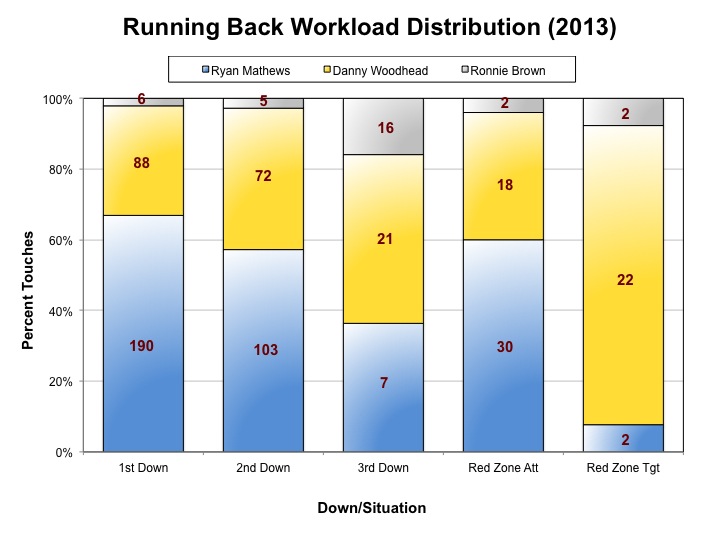 We see that while Mathews was the first option on first down plays with a combined total of 190 rush attempts and receptions, he actually began giving way to Woodhead on second and third downs, with Woodhead claiming a larger percentage of the team's touches on each subsequent down.

While some may argue that this shared workload was necessary to keep Mathews healthy, the quality of touches ceded to Woodhead suggested the splits were more with the purpose of using Woodhead's playmaking abilities than it was an effort to spell Mathews.

While Mathews was the lead back in terms of carries in the red zone, Woodhead still claimed nearly 40% of these rush attempts. Beyond this, Woodhead's 22 red zone targets in 2013 easily dwarfs Mathews' two looks inside the opponent's 20-yard line. And this split in touches near the goal line was for good reason. As I wrote about earlier this year, Woodhead has proven himself to be quite a red zone threat, converting nearly 20% (7 out of 37) of his touches inside the opponent's 20-yard line into scores in 2013.

This arrangement severely limited Mathews' scoring totals, with just five rushing touchdowns and one receiving touchdown in this part of the field. Again, contrast this with Bell, who turned 40 rush attempts and 13 targets in the red zone last year into 9 total touchdowns.

Despite this workload distribution, Matthews still managed to turn all these touches into 1,444 total yards from scrimmage to finish as a low-end RB1 for fantasy football. However, with valuable passing down and red zone work being shared with Woodhead, this also represents the best Mathews could have performed that year and, as we'll soon discuss, perhaps is a sign of Gordon's ceiling for 2015.

The touch distribution for the Chargers' running backs in 2013 discussed above came from a coaching staff that claimed to see Mathews as a bell-cow, three down back.

So what does this say about Gordon's workload in his rookie year?

First of all, its clear that the optimism and trust Coach McCoy and his staff had with Mathews as an every down back hasn't been earned by Gordon to start this season.

Instead, the team has already committed to a shared workload for the backfield in 2015, with quarterback Philip Rivers saying: â€œItâ€™s not going to be all Melvin... As Coach has always said... itâ€™s a running back by committee crew."

This shouldn't be a surprise. Given Gordon's rookie status and lack of passing down work in Wisconsin, both Union-Tribune San Diego's Kevin Acee and CBS Sports' Jason La Canfora have voiced concerns regarding Gordon's pass protection, saying he needs to progress in this department if he hopes to play on third downs.

Consistent with this idea, in Week 1 of the preseason, Gordon gave way to Woodhead in the red zone, where he then quickly ran in an eight-yard touchdown on the Cowboys.

And, in what is perhaps a reflection of the type of workload Gordon is expected to lose to Woodhead, our own algorithm has Gordon projected for just 7.4 total touchdowns this year.

Beyond this, if Gordon continues to falter in the running game -- he has just 45 yards on 20 preseason carries -- Woodhead is a more than capable back to shoulder a larger share of the rushing workload as well. While Woodhead's -0.04 Rushing Net Expected Points (NEP) per attempt was less than stellar, it still ranked him in the top half of all backs with at least 100 carries in 2013.

And because running the ball is far less efficient than passing, Woodhead's average from two seasons ago is actually right around the historical average of -0.03 for all running backs since 2000.

Currently, Gordon is being drafted in the late-third and early-fourth round in fantasy football leagues with an ADP of 38. This is perhaps fair value, as he still has the potential to finish the year as an RB1 (our own projections have him finishing as the 12th-best back this year) on the strength of his high projected workload on the ground.

But as we've just discussed, if it's upside you're looking for, Gordon may not be your man. While he certainly has the capability of finishing the year as a low-end RB1 or high-end RB2, that's where his ceiling is likely capped, with his chances of vaulting into elite territory this season looking very slim due to Woodhead's presence and role in that backfield.

Why Melvin Gordon Will Be the Next Great NFL Running Back

Melvin Gordon Could Be a Monster as a San Diego Charger

Can Danny Woodhead Return to Fantasy Football Success This Year?