Where Should We Draft Davante Adams in Fantasy Football?

All offseason, the narrative surrounding Green Bay Packers second-year wideout Davante Adams has been one big "what if" scenario.

Drawing rave reviews from Aaron Rodgers, Randall Cobb and head coach Mike McCarthy, every statement on his potential has always ended with the words "...if anything happens to starting wideouts Cobb or Jordy Nelson."

This past Sunday, those "what ifs" became reality. After catching an 8-yard pass from Rodgers in the Packers' preseason game against the Steelers, Nelson's leg gave out as he tried to turn up field and it was later confirmed that he had suffered a season-ending ACL injury on the play.

And just like that, Adams went from a bench stash in fantasy football leagues to a top-tier option at the wideout position.

So what can we expect from Adams in the expanded role he's been thrust into this season?

A quick look at Adams' build and measurables compared to Nelson's reveals that he at least has the prerequisite size and athleticism necessary to fill the vacancy created by Nelson's injury.

While he's a tad slower than Nelson in terms of his 40-time, Adams' vertical and broad jump numbers suggest he may actually be a more explosive athlete than the Pro Bowl wideout.

Adams consistently high points the ball, using his size and superior leaping ability to outjump opposing defenders for the ball. He also explodes off the line to beat defenders on shorter routes and screen plays.

Beyond his explosiveness and body control, Adams' superior 20-yard short shuttle and 3-cone drill times also reveals that he has the agility required to run the routes that would have gone to Nelson as the outside receiver in Mike McCarthy' system.

Expected Workload for Adams without Nelson

Beyond his size and athleticism, perhaps the biggest component propelling Adams up the wide receiver ranks following Nelson's season-ending injury is the offense he now finds himself playing a prominent role in.

So to understand the implications of Adams new role as the number two wideout in the Packers system, it's helpful for us to start by taking a look at what the passing distribution for the wide receivers on this team has looked like over the past four years: 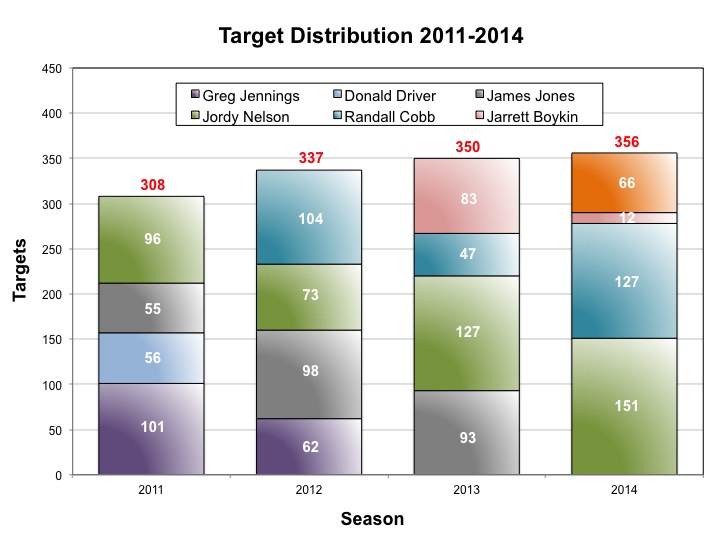 First, we see that Nelson has averaged 139 targets per season over the past two years, including a career-high 151 last year. While these targets likely won't all shift over to Adams, it's reasonable to expect a significant uptick in the number of targets the second-year man out of Fresno State will be getting in Nelson's absence.

Receiving 66 targets last year as the team's number three wideout, we could assume that Adams will at least garner the 103.5 targets the number two wideout on this team has averaged over the past four years. And on this note, with Randall Cobb manning the slot, when we look at the targets traditionally going to Adams' new role as Nelson's replacement on the outside, we see that those playing this role on the Packers have received 112 targets per year over this same time span.

So just how productive can Adams be on this high volume of work?

When we take a peak at Adams' efficiency on a per target basis by using our Reception Net Expected Points (NEP) per target metric, we find that, among all wideouts with at least 50 targets last season, Nelson and Cobb ranked in the top 10 with marks of 0.93 and 0.94, respectively, while Adams' 0.58 had him trailing significantly behind these two.

For those unfamiliar with our signature metric NEP, it's our in-house statistic to measure a player's contributions to his team's chances of scoring relative to expectation. If a player makes a play that helps his team's chances of scoring above expectation, he receives a positive mark. If he does something that detracts from these chances, he receives a negative score. You can read more about it in our glossary.

So, in essence, every target thrown Adams' way contributed just two-thirds the value of each pass thrown to the two starters ahead of him on the depth charts.

While this may seem like cause for concern, it's also a bit foolish to expect Adams to attain the same level of efficiency and production in his rookie season as these two veteran Pro Bowlers.

If Adams hopes to improve his production in his sophomore year and experience the rise in productivity that Nelson did, one area where he will need to improve is his catch rate -- his sub-par 57.6% mark in this category ranked him in the bottom-half of all receivers with at least 50 targets last season. Encouragingly, Nelson too had a fairly poor catch rate his rookie year, recording a 61.1% mark before improving to 71.0% in his second season.

While it may not be fair to expect Adams to make a similar 10-point leap in catch rate, jumping up to even 65.0% would bode very well for his output this upcoming year.

Filling in for Nelson in the Red Zone

Beyond the need to replace Nelson's production through the air, there's also a clear need for someone to step up and replace the 10.8 touchdowns per season Nelson averaged with the Packers between 2011-2014.

One big feather in Adams' cap, then, is his strength in getting across the goal line.

In college, Adams was quite the ball hawk in the end zone. As I wrote previously on Adams' prolific ability to score touchdowns, in 2012, as a redshirt freshman at Fresno State, he caught 14 touchdowns and then -- behind an impressive 36% red zone touchdown rate -- followed this performance up with a remarkable 24 receiving touchdowns in 2013.

And in his rookie season, he flashed glimpses of this ability to translate these skills into the NFL as well.

Last season, Adams accrued 11 red zone targets on just 66 passes thrown his way (16.7%), a rate comparable to that seen by Nelson (18.5%). Adams converted these looks into catches and touchdowns at the same rate as Nelson as well, with his 54.5% red zone catch rate and 18.2% red zone touchdown rate right in line with Nelson's 42.9% and 17.9% in these respective categories.

With his superior athleticism and size, it wouldn't surprise me to see Adams get close to the touchdown production of Nelson given his increased opportunity and expanded role in the Packers offense.

So Where Should He Be Drafted?

As the Packers' clear-cut number two wide receiver and primary option on the outside in a highly productive offense that has a clear need for his abilities, and perhaps most importantly, with Rodgers under center, everything is coming together for Adams to have quite a productive 2015 season.

If he can get on the same page as Rodgers this season and if his efficiency improves, then he could end up with 72 receptions for 936 yards (13 yards per reception), and 8 touchdowns on 110 targets. Currently, our projections have Adams as the 26th best wide receiver with a line of 76 receptions, 900 yards and 6.5 touchdowns. He's a solid pick in the fifth round of drafts given his upside, and in many leagues, a fourth-round cost makes sense, too.

In the Wake of Jordy Nelson's Injury, What Will the Packers Do?