Is C.J. Anderson Worth His First-Round Cost in Fantasy Football Drafts This Season?

Joseph Juan  —  @FF_Scientist Aug 13th, 2015
Share on Facebook Share on Twitter
C.J. Anderson will cost you quite a bit more draft capital this season than he did last year. Will he be worth the gamble?

You may be surprised to hear that a lot of my strategy in fantasy football actually comes from my days playing poker; Texas Hold 'Em to be exact.

That's because in fantasy football, just like in poker, you've got to know when you've been dealt a good hand, when to gamble, when to fold, and when to bluff like you're holding something better than you really are.

And just like in Texas Hold 'Em, in fantasy football, you're often making decisions with incomplete information.

So while Broncos running back  C.J. Anderson is anything but a sure thing in fantasy football this season, as we'll soon discuss, his prospects of giving his owners a winning hand by year's end makes him well worth a gamble in the first round of drafts in 2015.

In Texas Hold' Em terms, C.J. Anderson has been dealt an exceptional hand to start the season.

Earlier this offseason I did an in-depth analysis of the Broncos' running back situation and came away with the conclusion that C.J. Anderson is by far  the team's best all-around tailback.

Among the three backs receiving carries for the Broncos last season, Anderson outperformed them all both in terms of gross output and efficiency. In just seven starts, Anderson amassed 849 rushing yards alongside 8 rushing touchdowns. From a per carry perspective, while his 4.7 yards-per-carry average was over half a yard per more than that put up by the next closest guy ( Ronnie Hillman with 4.1 yards per carry), what's even more impressive were his Rushing Net Expected Points (NEP) averages.

His 0.10 Rushing NEP per attempt was not only far and away the best mark by any Denver tailback last season (Hillman and Montee Ball put up -0.01 and -0.15, respectively), but among all backs with at least 100 rushing attempts, this figure was also second only to Jamaal Charles (0.11).

In the passing game, Anderson was a stud both as a receiver and a blocker. Just like in the running game, he once again led all running backs in the receiving categories, topping the list in receptions (34), receiving yards (324), yards per reception (9.5), receiving touchdowns (2), catch rate (77.3%), and Reception NEP (27.19).

He was also marginally better than his two backfield mates in protecting Peyton Manning, giving up quarterback pressures on just 7.8% of his 51 pass block snaps compared to 8.3% for Hillman, and 16.0% for Ball.

And when it comes to blocking for the quarterback, there's no place this aspect of the game is more important than in Denver, where the ability to keep Manning upright may be just as important as being able to move the ball on the ground.

As we'll soon see, this exceptional every down capability is exactly what new Broncos head coach Gary Kubiak is looking for in his starting tailback.

The Perks of Being A Bronco

Poker players know that, while a hand is almost never determined at the flop, it does provide context in terms of predicting probability of success when all the cards are dealt. So, in a lot of ways, NFL camp reports and team situations are a lot like the flop, giving us insight into a player's prospects as the season develops.

At the same time, with quotes flying around from just about every imaginable source during this time of the season, it's easy to get caught up in what many of us call "coach speak."

Whether that be sound bites coaches drop to the media to motivate their team or to hype up their fanbase, oftentimes these words are just that, words without substance.

For example, we all remember when offensive coordinator  Nathaniel Hackett infamously stated that the Bills would give C.J. Spiller "the ball until he throws up." And we know how that one worked out for everybody.

But despite all this, when Gary Kubiak says "I believe in the (bell cow)... if a guy goes out there and he shows he can play three downs, can protect the quarterback, and can handle it, then he should stay out there," then I'm willing to believe him.

That's because as they say, actions speak louder than words. And Kubiak's track record speaks volumes for how he uses his primary tailbacks: 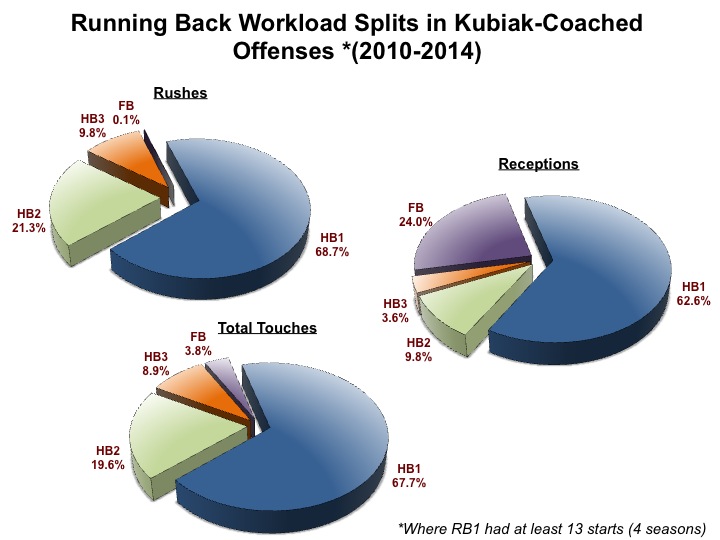 Indeed, when we look at the past four seasons in which Kubiak has served as either a head coach or offensive coordinator and had a tailback start at least 13 games, Kubiak has, on average, fed the RB1 over one-third of the team's total touches. This includes giving the primary back nearly 70% of all running back rush attempts, and just a shade under 63% of all running back receptions.

All this has resulted in a 298 carry, 50 reception per-season average for Kubiak's lead backs over this time span.

And as the team's best tailback both on the ground and in the air, this bodes very well for Anderson's prospects in 2015.

Beyond this promising workload, it also helps to be running alongside Peyton Manning:


We see that in four of Manning's last five seasons, the rushing attacks for each of his teams have finished in the top 13 in rushing efficiency as measured by adjusted Rushing NEP per attempt (which takes into account strength of schedule), including an 8th place finish last season where Anderson started in just a little under half the team's games.

What's even more impressive is that this consistently solid running back efficiency was achieved by players that were far less than Hall of Fame worthy, and that's putting it nicely.

With names like "Dammit" Donald Brown, Willis McGahee, and Joseph Addai putting up solid production while lining up behind Manning, it's obvious that even average backs can find success with the future Hall of Famer under center commanding much of the opposing defenses' attention.

With his superior skill set, a high volume workload, and his likely efficiency on all these touches thanks to the defensive attention that will be going his quarterback's way, it looks as though the sky is the limit for Anderson this upcoming season.

No matter how good you are, how much you've researched, how sharp you're intuition, there's an inherent element of risk involved in the game of poker.

That's why they call it gambling.

But I think Matt Damon's character in the movie Rounders, Mike McDermott, put it best when he said: "You can't lose what you don't put in the middle... But you can't win much either."

And as our Editor-In-Chief JJ Zachariason recently noted, drafting a third-year running back with seven starts under his belt is also certainly quite a gamble.

But such are the risks with drafting just about any running back, really.

So if you want to give yourself the best chance of landing a  difference-making, top-tier running back, your best bet is to place your stock in one of the guys sitting in the top-tier.

And with an  ADP of 7, and as the sixth tailback off the boards in drafts this year, C.J. Anderson is arguably the last member of this tier.

Our projections for Anderson have him ending the year as an RB1s as the ninth-ranked tailback in standard-scoring leagues. But when we take a closer look at the numbers, it's evident that these are fairly conservative estimates, with our algorithm giving Anderson just 183 carries on the year. If Kubiak stays true to his word and his track record to utilize a single workhorse back, then as we've just discussed above, Anderson could be in store for many more touches on the ground and therefore much greater overall production to beat these projections.

Still, you may be wondering whether you'd rather take your chances on one of the other backs being drafted around him?

While some of the tailbacks being drafted right after Anderson are certainly a bit more experienced than him, they aren't without their risks and question marks either.

Matt Forte has not only lost Marc Trestman, who fed Forte the ball more than any other coach minus his rookie season, but with all the tread on his tires, is also approaching what I've termed the "1,800 carry cliff."

Lesean McCoy had a fairly subpar season last year, due in part to his running style (he does a bit more dancing in the backfield than he should for my liking) combined with an Eagles offensive line that was operating at less than 100%. Now playing for the Bills and running behind their 32nd-ranked run blocking unit according to Pro Football Focus, things won't be getting any easier for McCoy to rack up those yards between the tackles.

And while  DeMarco Murray had the best season of his career last year to lead all running backs in rushing, he also did nothing to shake his injury-prone label. This, combined with the fact that he'll likely be sharing the Eagles' running back workload with Ryan Mathews in a true running-back-by-committee timeshare, makes him just as risky a pick as C.J. Anderson.

So for your drafts this year, while drafting Anderson with your first pick isn't without it's risks, the inherent liabilities involved in going after just about any top-tier running back combined with his tremendous upside makes Anderson well worth the gamble.