Is Ryan Tannehill About to Become a Top-Tier Fantasy Football Quarterback?

Growing up as a kid in the '90s, my every waking moment was occupied primarily by two things: sports and role-playing games (RPGs).

With superstars like Michael Jordan, Ken Griffey, Jr., and Jerry Rice dominating the national media night after night, it's easy to see how a kid could get hooked watching sports on a regular basis.

The attraction to RPGs, on the other hand, came down to the allure of building something out of nothing. You started off with a low-level character and slowly, but surely, turned them into the hero of the story. But in order to reach the end credits, you couldn't just focus on your main character. You had to constantly devise better strategies to outsmart ever stronger opponents, as well as continually develop and recruit better characters to your party.

Oddly enough, when you've spent as much time flip-flopping between the world of RPGs and sports as me, you start to realize that the two are more alike than you would expect.

This is especially true when you look at the NFL. Just like an RPG, which builds its story around a main character, teams have largely been built around franchise players -- whether that be Calvin Johnson in Detroit, Andrew Luck in Indianapolis, or Aaron Rodgers in Green Bay. Teams revolve around their star player.

And just as strategies must evolve in these video games, NFL coaches, too, must implement innovative play calling to stay one step ahead of evolving defenses. Likewise, front offices must find ways to surround their star player with the right supporting cast.

And with the pressures of the salary cap and free agency today strongly influencing personnel decisions, the parallels between RPGs and the NFL are now more evident than ever.

When the Dolphins signed quarterback Ryan Tannehill to a six-year, $96 million contract this past offseason, it was a sign of their decision to build him up as the centerpiece of their offense. And as we'll soon see, just like the strategy implemented by any good RPG player, this decision was made based on Tannehill's continual development at the position alongside a game plan and team make-up that best complement his strengths.

Few seem to remember that Ryan Tannehill didn't begin playing quarterback full-time until the middle of his junior season at Texas A&M in 2010. Tannehill spent most of his collegiate career playing wideout for the Aggies, setting single-game school records for catches (12) and yards (210) his freshman year, and winning All-Big 12 Honorable Mention honors his sophomore season.

His improvements at quarterback year after year therefore become even more impressive when you consider the fact that Tannehill is still learning to play this position at the highest levels.

Improving Production
If you follow Tannehill's NFL career thus far, the first thing that stands out is that he's improved significantly in literally every statistical category each year since entering the league. 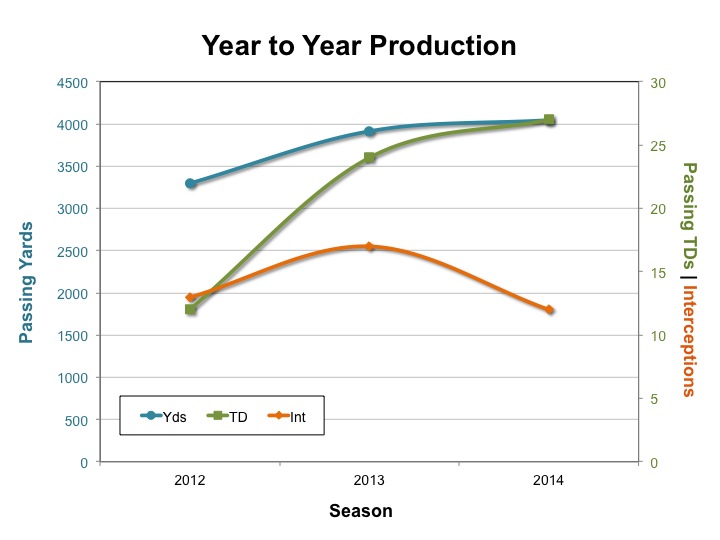 And for those thinking Tannehill owes these improved numbers to an increase in volume, he actually attempted just two more passes last season (590) than he did in 2013 (588). Instead, Tannehill made these improvements by developing into a more efficient quarterback.

Improving Efficiency
Tannehill's ability to add more and more value to his team on a per-play basis is best illustrated by his escalating figures in our Net Expected Points (NEP) metrics and in his completion rate.

For those unfamiliar, NEP is our in-house metric that measures a player's contributions to a team's chances of scoring above or below expectation. A positive NEP means a player improved his team's scoring opportunity, and as you might expect, a negative score means the opposite. 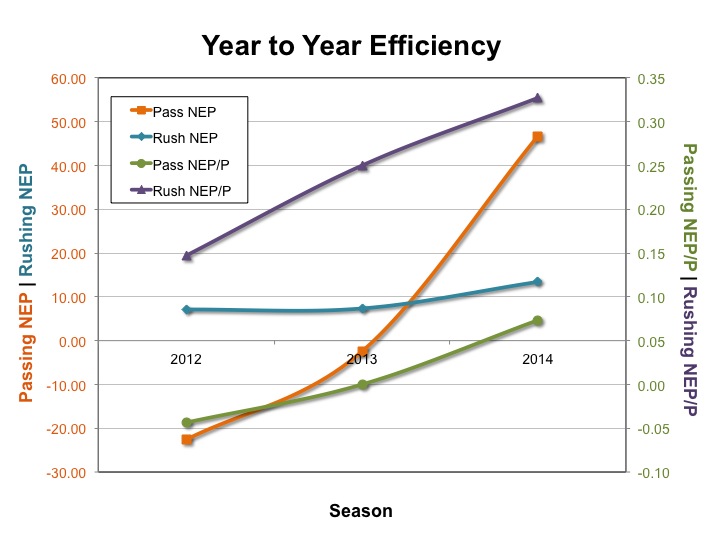 So while Tannehill started off his career costing the Dolphins -0.04 points per drop back his rookie season, by 2014, he was adding on average what amounts to 0.07 points on each and every passing down. And as we mentioned earlier -- a gifted athlete -- Tannehill has also added value to his team on the run, more than doubling his 0.15 NEP per rush in 2012 to 0.33 in 2014.

In terms of passing accuracy, the Dolphins signal-caller has made major strides in this part of his game as well. 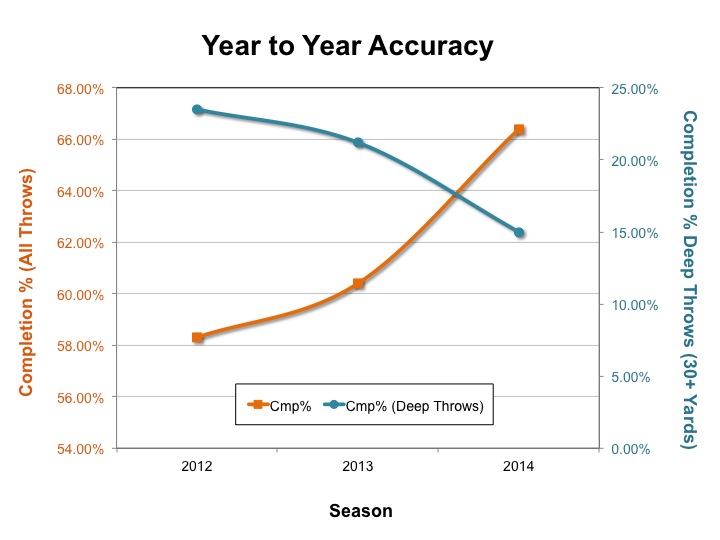 Not only did Tannehill add over eight points to his completion percentage in 2014 over his rookie year mark of 58.3%, but his 66.4% completion rate ranked him fifth last season, just ahead of future Hall of Famer Peyton Manning (66.2%).

However, things aren't all rosy for the Dolphins fourth-year man. Criticized for his inability to hit the deep ball, Tannehill's completion rate on attempts greater than 30 yards down the field has actually gotten worse in each of his three seasons in the NFL.

And despite reports of an improved deep ball in OTAs and mini-camp, there's still no guarantee that this will carry over to the regular season with 300-pound linemen breathing down his neck.

Thankfully, despite these weaknesses, as we'll soon discuss, Tannehill finds himself playing for an offensive coordinator in Bill Lazor that knows how to play to his strengths, as well as a front office that has made moves to surround him with the right talent that fit his playing style.

The Dolphins' offense was mired by the rigidity and predictability of former offensive coordinator Mike Sherman's play calling during Tannehill's first two seasons in the league. So perhaps not coincidentally it wasn't until the Dolphins installed former Chip Kelly-disciple Bill Lazor's system into their offense did their first round quarterback truly come into his own.

In one year under Lazor, the team drastically improved its total offense, going from the 27th ranked team in 2013 to the 14th ranked squad in 2014, per our metrics. And they did so by taking leaps forward in efficiency. 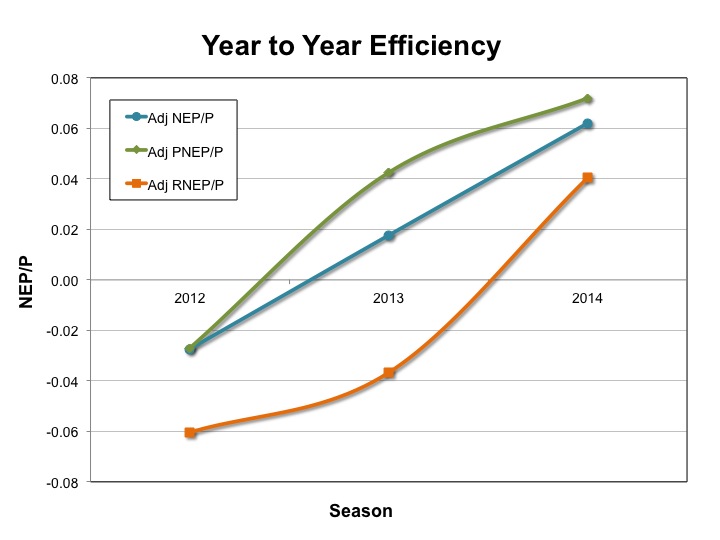 According to our adjusted Net Expected Points metric, which accounts for strength of schedule, the Dolphins total NEP on a per-play basis swung from a -0.03 in 2012 to a 0.06 mark in 2014.

And after adjusting well to Lazor's fast-paced scheme last year, the offense is only projected to get better in Tannehill's second year running it. On this note, Lazor was been quoted as saying that he didn't know if you could "script a better formula for a guy to be successful," adding that he believes "everything should be better" for Tannehill this upcoming season.

Despite not starting until Week 6 of last season, Jarvis Landry quickly developed a rapport with Tannehill to accumulate 84 receptions on 112 targets. For this upcoming season, with improved straight-line speed and a full NFL season under his belt, the expectations are Landry will continue to serve as an effective security blanket for Tannehill to fall back on.

And with Landry in place to anchor the passing game, the Dolphins got to work early this offseason surrounding Tannehill with shiny new toys to use in their aerial attack.

In an absolute coup, the Dolphins kicked off their offensive overhaul by acquiring Kenny Stills from the New Orleans Saints (and at a bargain price at that, if you ask me). As our own Brandon Gdula noted at the time, Stills was the most efficient receiver on a per-target basis the past two seasons and will serve as a more than capable replacement for Mike Wallace as the team's deep threat.

The signing of free agent veteran Greg Jennings also brings a welcome veteran presence to this team's young wide receiver corps. Jennings will not only set the example for this young locker room to follow, but gives Tannehill another reliable option in the passing game as well. Indeed, in terms of efficiency, his 0.76 Reception NEP per target alone would have led the Dolphins in this category in 2014.

The addition of tight end Jordan Cameron certainly helps Tannehill's prospects for next season as well. Despite an injury-riddled 2014 that hampered his production, his efficiency as measured by his 0.68 Reception NEP per target was in line with the 0.65 figure he recorded during his breakout 2013 campaign. This number not only tops former Dolphins tight end Charles Clay's 0.50 Reception NEP per target from last season, but provides hope that -- if Cameron can stay healthy this year -- his ability to dominate opposing defenses in the passing game still remains intact.

And like Mike Wallace -- who accounted for 38% of the Dolphins' red zone touchdowns last season -- Cameron will likely add the most value is in the red zone, a region in which Cameron recorded 7 touchdowns on just 19 targets in 2013.

On this note, rookie DeVante Parker himself has proven to be a scoring maven over the course of his collegiate career. As Graham Barfield found, one out of every five of Parker's receptions in college went for touchdowns. And as I wrote earlier this season, with an impressive catch radius provided by his 6' 3" frame, 36.5" vertical, and 125" broad jump, we can expect Parker to continue this success in this portion of the field as a pro, providing Tannehill with yet another big target to utilize inside the opponent's 20.

The backfield has also seen improvements this offseason, which will take some pressure off Tannehill from having to move the chains all on his own and will help keep opposing defenses honest.

Alongside Lamar Miller and his efficiency both in short yardage and in the red zone, the Dolphins used a fifth-round pick to add explosive Boise State running back Jay Ajayi to their already potent ground game. And drawing comparisons to Seattle running back Marshawn Lynch, Ajayi adds just another component to this team to keep the offense running on all cylinders.

Everything we've just discussed regarding Tannehill's development and the Dolphins commitment to build the team around him bodes very well for his fantasy value for 2015. Going all the way in the 11th round of 10-team drafts with an ADP of 104, Tannehill's potential to end the season as an elite quarterback makes him well worth the draft capital required to acquire his services.

I'm not the only one bullish on Tannehill's prospects for this upcoming season. While our own projections have him finishing as a top 12 quarterback, recent analysis by Denny Carter suggests that Tannehill has a decent shot at finishing the year as a top-five quarterback.

Still going at a reasonable price as the QB13 in drafts based on current ADP, the price is right to gamble on a player where the sky is seemingly the limit and who has everything going for him entering the 2015 season.

NFL Week 7 Power Rankings: Are the Packers as Good as Their Record Suggests?