Arian Foster Is Already Being Overlooked in Fantasy Football

Joseph Juan  —  @FF_Scientist Jun 19th, 2015
Share on Facebook Share on Twitter
Going as the seventh running back off the board in fantasy football drafts this season, Arian Foster may be a great value pick for saavy managers this year.

There are some words in the English language that are so contradictory to one other that it seems illogical to ever use one in conjunction with the other.

Regarding the last set of words, this is especially true. As a fantasy football manager, if you're looking for a value pick, you're often not looking for it in the first round of your draft.

Yet, every year a running back drafted in the late first or early second round area, later catapulting himself past all those taken ahead of him to land as a top-three tailback by the end of the season. And every year, managers are left wondering how such a great bargain slipped past them in their drafts.

In 2011 it was LeSean McCoy, flying past his late first round average draft position (ADP) to finish as the second-best back in fantasy football.

In 2012 it was Adrian Peterson -- just nine months removed from ACL surgery -- who exceeded all expectations to beat his late second round ADP, ending the year as the top running back in all of fantasy.

In 2013 it was Matt Forte, who was unleashed as an incredible receiving threat by first-year Bears head coach Marc Trestman to beat his RB11 position as the third best back of the season.

And, of course, in 2014 it was the duo of DeMarco Murray and Le'veon Bell -- drafted as the 8th and 14th running backs off the board, respectively -- who finished as the top two backs in fantasy football.

If you ask any manager who drafted these backs at their average ADPs that season, they'll tell you that they got a steal in the draft.

So what did these players all have in common that caused them to be overlooked in drafts just enough to become a great value pick? As I alluded to above, oftentimes concerns about workload and/or a questionable injury history will scare risk-averse fantasy managers away from using an early draft pick on these seemingly high-risk, high-reward players.

And for this upcoming season -- with doubts regarding his consistency, health, and age driving down his value to a late first round ADP (RB7) this year -- Arian Foster may very well be the tailback who fits the mold of someone capable of outperforming his ADP to then give his owners tremendous value late in the first round. And our very own projections here at numberFire have him tabbed as the number-two running back for 2015.

So with all that being said, let's take a look at all the question marks suppressing Foster's value to see if he can him overcome these negatives to make good on these lofty expectations.

One reason fantasy football managers are unwilling to draft Foster any higher than his late first-ish round ADP this season is due to the idea that he's been an inconsistent fantasy football option throughout his career.

But in this regard, despite all the missed games, Foster has still finished as the 5th, 42nd, 3rd, 3rd, and 1st best back in standard leagues over the past five seasons. 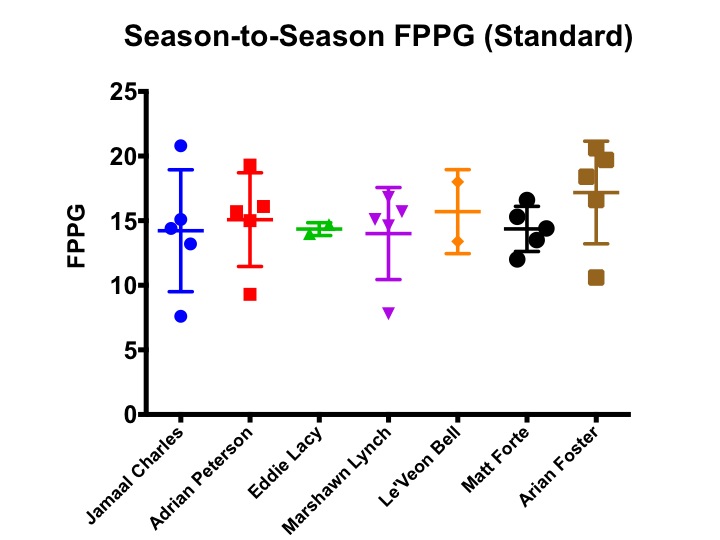 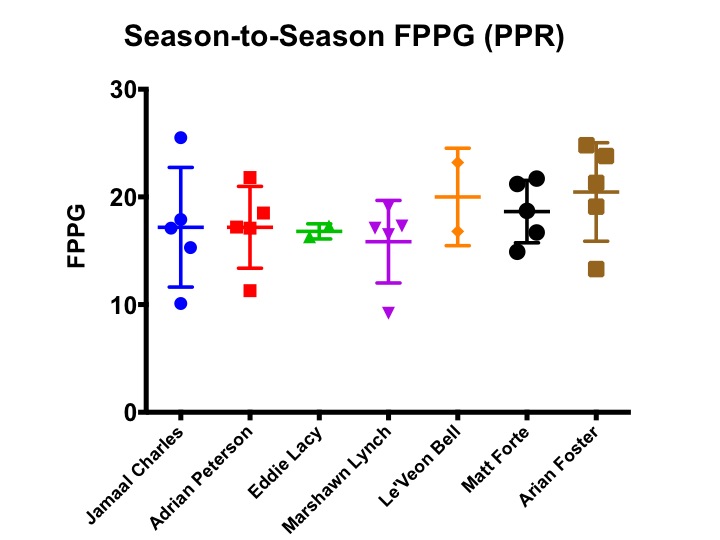 To put this performance into perspective, only one other running back currently being drafted in the first round of drafts, Adrian Peterson, has managed this same feat.

And when we continue to break down Foster's fantasy scoring, it becomes apparent where this consistency comes from. 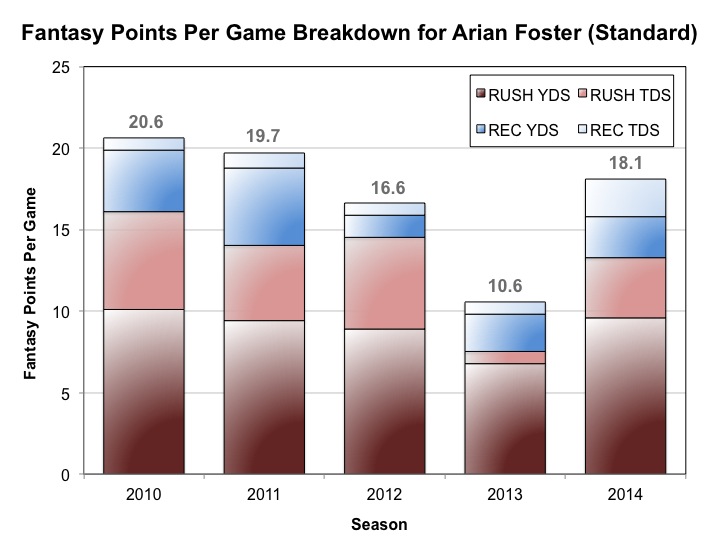 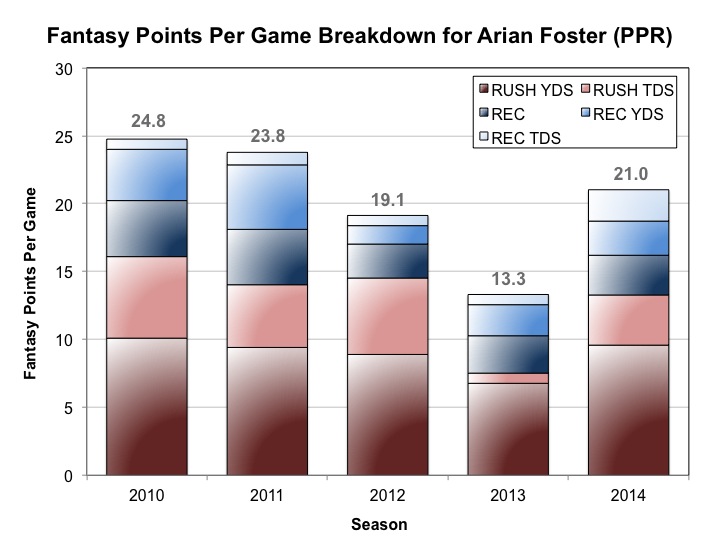 With almost 75% of his scoring coming from the categories that are most easily reproduced from season-to-season (yardage and receptions), and only 25% of his points coming from the more volatile touchdown category, Foster has been able to produce a very steady turnout of points from year to year.

Consistent with this, in the lone season in which Foster failed to score at least 16 points per game and finish as a top-five back in standard leagues (19 in PPR), he still managed to stay within his normal range of scoring in the rushing and receiving categories. Instead, the majority of his reduced output during his 2011 injury-riddled season can be attributed to a lack of rushing touchdowns compared to his normal output.

But with Foster enjoying perhaps one of his healthiest offseasons in some time now, the high reproducibility of his year-to-year output and the dependence of the Texans offense on him this season to produce touchdowns, Foster stands poised to repeat the production that has made him a top-five running back in four out of the last five seasons.

He's on the Downswing of His Career

Others bearish on the Texans' workhorse back argue that, since 2012, Foster just hasn't been as effective with his touches as he was during the first few seasons of his career and that we're now witnessing the start of his steady decline out of fantasy relevance.

Well, over here at numberFire, we measure efficiency in terms of Net Expected Points (or NEP). NEP is our in-house metric which measures a player's contributions to his team's chances of scoring above or below expectation.

And that being said, if we take a look at Foster's NEP from season-to-season on a per-touch basis, counter to the narrative of a career on the decline, we actually find a very interesting trend for Arian. 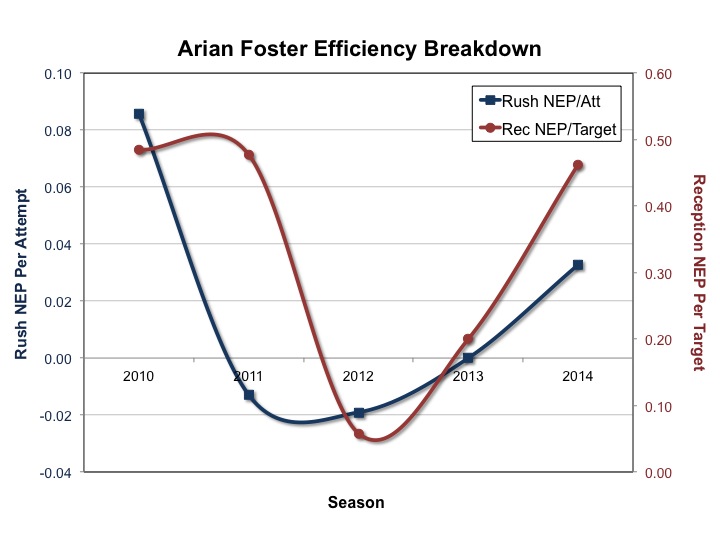 Based on these numbers, it seems as though Arian has found the fountain of youth to once again hit the high level of play that he enjoyed during his breakout year all the way back in 2010.

Importantly, this efficiency has a direct, positive impact on Foster's workload. Although coach Bill O'Brien remarked on the need to "manage" Arian's touches this upcoming season back in February, he recently backtracked on these comments, saying that "...as long as heâ€™s healthy and heâ€™s out there, we will run the ball." 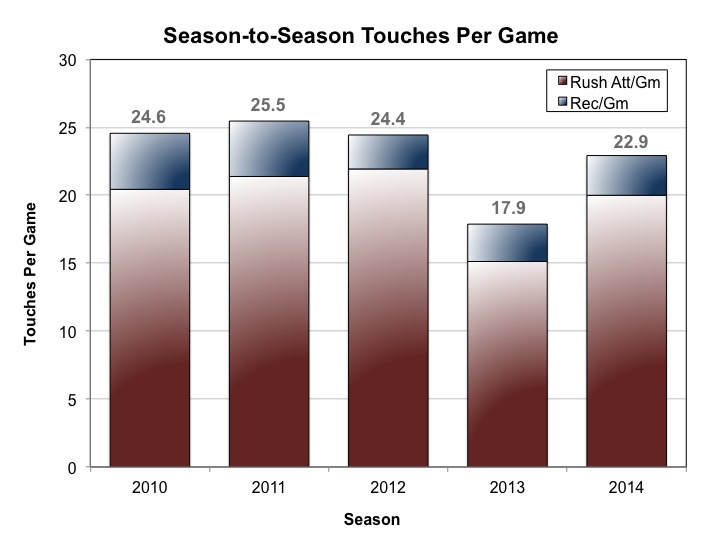 Following the release of long-time playmaker Andre Johnson this offseason, and the replacement-value play of backup tailback Alfred Blue last year (Blue was one of the least effective runners per touch in the NFL, per our metrics), O'Brien has likely realized that as long as Foster is being productive, their best chance of winning will rely heavily on getting their star running back the ball early and often.

Given his recent resurgence in 2014, it's evident that Foster is still arguably the Texans most dependable and talented option on offense. Because of this, and with question marks all over the passing game, we should fully expect Foster to receive a workload that can sustain a top-three running performance this upcoming season.

He's Too Old and Injury Prone

Another huge knock on Arian Foster has been his age (he turns 29 and is going into his seventh season in the league) and inability to stay healthy for an entire the season. Yet, what often isn't mentioned is that, while Foster does fall prey to these risks, these same issues are also applicable to the six other backs currently being drafted ahead of him. 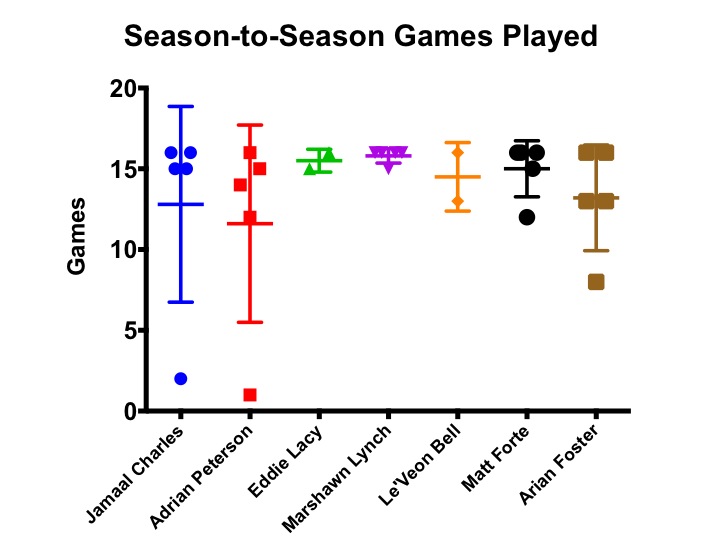 With multiple injuries throughout the seasons, Foster has missed an average of 2.8 games per year, including one season where he played in fewer than 10 games. While in isolation this is certainly concerning, it's less of an issue when you consider that the same can be said of the top two backs being drafted this year.

Of the four backs who have averaged at least 14 games played in each season since 2010, two of them -- Eddie Lacy and Le'Veon Bell -- have only played two seasons in the league. This is hardly a large enough sample size to make a call one way or another on these two players' likelihoods of playing an entire season. And on this note, Bell is already guaranteed to miss a number of games to start the season due to a DUI charge back in August.

This leaves us with Matt Forte, who has played in at least 15 games in four out of the past five years, and Marshawn Lynch, who has missed just one game over this same time span.

While this in itself is a stellar work history, these two players have another large issue hanging over their heads.

As I profiled earlier this season, historical evidence suggests that running backs tend to take a sharp decline in productivity the season after they hit the 1,800-carry mark. This is notable because in 2014, Forte (1,817 carries) and Lynch (2,054 carries) both crossed this limit.

And while these two backs are not a guarantee to fall off this cliff this season, those worrying about the mileage on Foster's tires would be remiss to then ignore this glaring trend (for those wondering, Foster has only had 1,391 rush attempts in his seven-year career).

With all this being said, you can see that while Arian Foster may not be the safest option given his past injury history, it's clear that many of the players being drafted ahead of him are far from being bulletproof, surefire picks themselves.

Taken all together, it's clear that Arian stands poised to emerge as a top-three running back this upcoming season. With his productivity hitting an upswing in recent past and promising workload projections as the Texans' centerpiece on offense, Foster has the ability to dispel a number of misguided narratives that are driving down his ADP to crush these expectations and give his fantasy football managers a bargain in the first round this year.