One sure-fire way to fail at fantasy football is to assume that everything that happened last year will repeat itself this year.

With the sheer number of changes that occur between one season to the next -- coaching staff turnover, shifts in play-calling, free agent signings, the NFL draft -- it's almost a guarantee that history will not repeat itself in the NFL. And, in my opinion, it's the ability to spot these changing circumstances and understand their potential impacts on player value that are two of the most critical factors to fantasy football success.

So you can bet that, when Green Bay Packers slot man Randall Cobb told reporters that "Itâ€™s going to be hard to top what I did last year," and with "Davante [Adams] coming along" with the potential for more targets, it definitely caught my attention.

Coming off a career year last season, and considered by many as a safe bet to repeat as a WR1 option in fantasy football for next season, I decided to take a closer look at Cobb's situation with the Packers for 2015.

A Career Year for Cobb

After a fractured right fibula cost him 10 games of the 2013 season, Cobb essentially played out the final year of his rookie contract as a prove-it season.

And prove it he did.

Playing in all 16 games in 2014, Cobb amassed career highs in receptions (91), receiving yards (1,287), and receiving touchdowns (12). And after it was all said and done, Cobb's standout performance led him to a four-year, $40 million contract to remain a Packer this offseason.

For fantasy football purposes, Cobb's 18.3 points per game in PPR leagues (12.7 in standard) also led him to a top 8 (top 7 in standard) finish among all wide receivers last year.

Cobb's ascent into the top 10 of his position last year was in large part due to his improvements in the touchdown category. His 12 touchdowns last year marked a 150% increase over his previous career high. 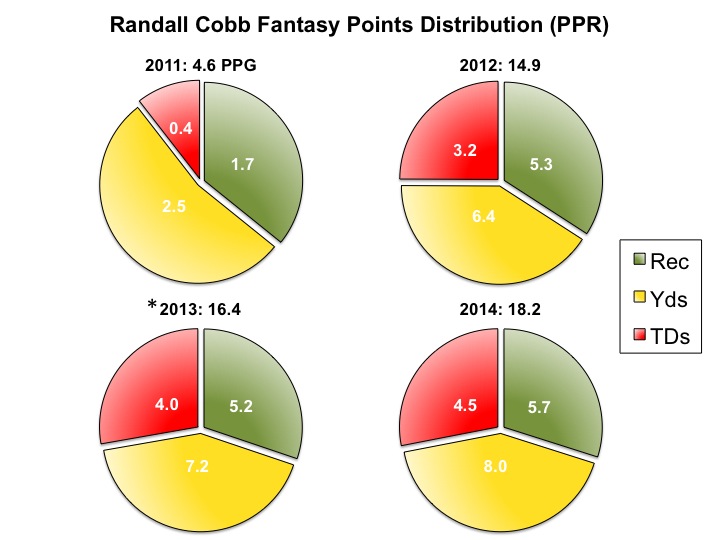 So while Cobb had quite an impressive 2014 season, it's always a concern when a player's scoring in fantasy football contains such a high touchdown component.

That's because fantasy football veterans know that one rule of the game is that you can't count on touchdowns. As perhaps the game's least reproducible statistic from season to season, it's nearly impossible to predict how touchdown-dependent players will perform from one season to the next.

And even Cobb realized this when he admitted to reporters recently that he may be hard-pressed to repeat his 2014 performance in 2015.

Cobb's Success in the Red Zone

With all this being said, there are a few caveats to this rule. Some of the risk and randomness of touchdowns can be mitigated when these scores come as the result of looks in the red zone, which to some extent can be predicted with some certainty.

And on this note, when we look at Cobb's improvement in the touchdown department over last season, we see that most of these scores actually came as a result of his increased production in this portion of the field. 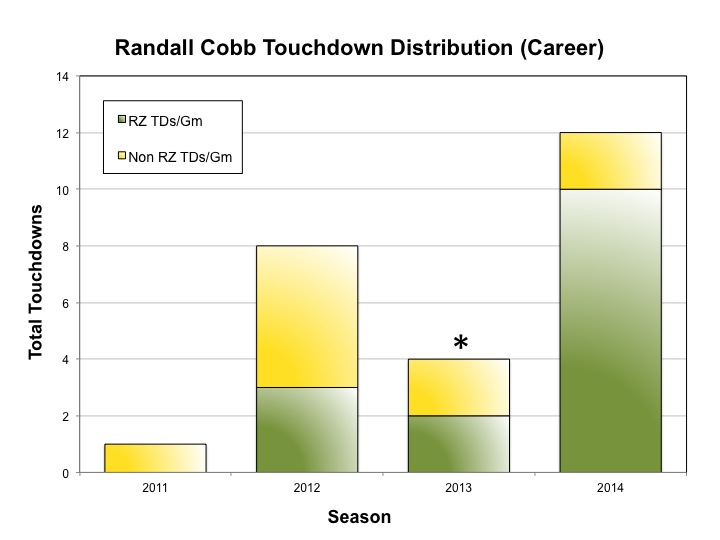 Cobb grabbed 10 touchdowns in the red zone last season on the strength of both an increase in his targets within the opponent's 20-yard line, along with his improved efficiency in this area of the field . 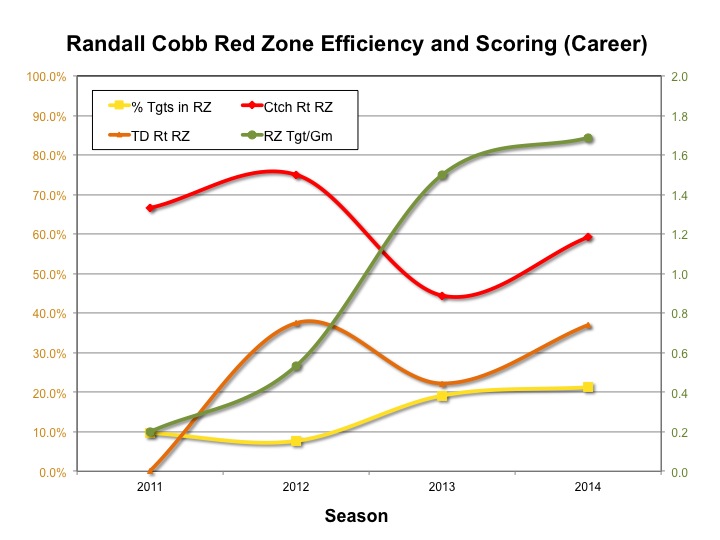 This improved efficiency in the red zone is also reflected in Cobb's career-high 119.1 Reception Net Expected Points (or NEP), which ranked him 7th in the league in this category. For those unfamiliar with this metric, NEP is our in-house measure of a player's contributions to a team's chances of scoring above or below expectations. To read more about it, check out our glossary.

But are Cobb's impressive rates across the board in this critical part of the field sustainable for next season?

A number of factors are playing against Cobb's continued success in the red zone this season, not the least of which includes competition from a number of young receivers sitting behind him on the depth chart. And while playing in a crowded wide receiver corps is nothing new to Cobb -- he's had to compete with the likes of Donald Driver, Greg Jennings, and James Jones for targets during his four year tenure with the team -- as we'll soon see, Davante Adams presents a legitimate threat to Cobb's workload in the red zone.

A Bigger Role in the Red Zone for Davante Adams?

With Cobb predicting Adams to take a step forward in the Green Bay offense this upcoming season, the obvious area for Davante to encroach on Randall's production is in the red zone.

As a redshirt freshman at Fresno State, Adams caught 14 touchdowns and then -- behind an impressive 36% red zone touchdown rate -- followed this performance up with a remarkable 24 receiving touchdowns in 2013.

And as a rookie last season with the Packers, Adams already started to see some involvement deep within enemy territory as well.

And with a catch rate in this region comparable to that of Cobb's, along with a strong history of success in this area of the field dating back to college, there's no reason to believe that Davante won't continue to build off his strong rookie campaign to garner increased chances in the red zone in 2015, perhaps at the cost of Cobb's opportunities.

A Regression in Overall Targets for Cobb?

If a regression is coming for Cobb, it likely won't just come in the end zone. Cobb's looks in the passing game overall would be predicted to take a hit as well. But to what extent?

The Packers under Aaron Rodgers have always had a pass-heavy identity, with their 596 pass plays per season from 2011-2014 ranking them in the top-half of the league in this category. However, while the targets for their top four receivers each year have stayed relatively stable over this time span, the proportion of targets funneled to the Packers' top two wideouts -- Jordy Nelson (151) and Randall Cobb (127) -- were disproportionately high in 2014. 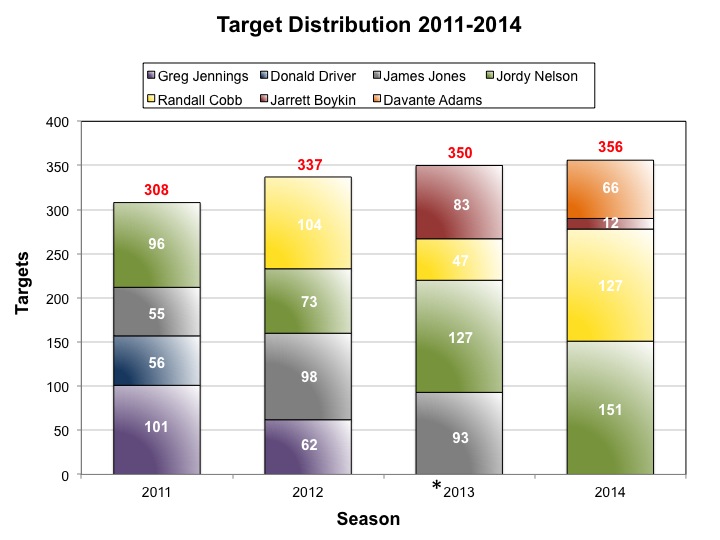 While I expect this target distribution to normalize in 2015, I don't expect Cobb's targets to drop all the way down to the 96 per season the Packers' number two wideout averaged between 2011 and 2013.

Last season, Cobb's 18.3 points per game in PPR leagues ranked him eighth among all wideouts. Even if he regresses to his 2013 averages of 1.5 red zone targets per game and a 22% red zone touchdown rate, and loses a few looks to second-year man Davante Adams next season -- assuming all else stays roughly the same -- this would only account for a 1.9 points per game drop for Cobb in 2015. And this 16.4 points per game for Cobb would have still had him tied with Alshon Jeffery for 12th among all receivers in 2014.

While the downside of a potential statistical regression slots Cobb firmly behind other players with a bit more upside such as Julio Jones, his expected role and production in the Packers high octane offense still makes him a low-end WR1 or high-end WR2 this year.