Graham Barfield  —  @GrahamBarfield May 12th, 2015
Share on Facebook Share on Twitter
Can we learn anything from the NFL draft round a running back is selected in? What do these conclusions mean for future fantasy glory?

Running backs are easily the hardest position to predict in fantasy football.

Just by the violent nature of the position, how brutally hard it is to play, and the fact that running backs' production relies heavily on game-flow plus offensive game management, it's no wonder we're all stuck shaking our heads trying to figure them out.

Making matters worse, it is extremely hard to draft running backs in fantasy football. According to historical running back bust rates, a player drafted in the top-six running backs overall has just a 53.3% chance of finishing the season as an "RB1" (RB1-RB12).

Still, as we know, we all covet consistent backs on our fantasy teams. Whether it's through striking gold with Le'Veon Bell last season or overzealously drafting Montee Ball, everyone desires to have a "RB1" on their roster. But actually drafting a difference-making running back is clearly easier said than done.

Knowing these things, wouldn't we all want to become better at drafting running backs? It's impossible to predict a runner's success fully -- there is no doubt about that. However, having more information may help solve this equation.

One place we can look is the NFL Draft. Let's enter a discussion about why the NFL draft round a ball carrier is selected in matters for future fantasy production.

Everyone bags on Trent Richardson. Most of the animosity is deserved. Along with Darren McFadden, these two backs are constantly used as a litmus test for why teams should be hesitant to invest a first round pick in running backs. For now, let's put that theory aside. Yes, running backs are fungible and somewhat replaceable. But we're only here to score fantasy points.

For every Richardson and McFadden, there is an Adrian Peterson, LaDanian Tomlinson, or Shaun Alexander. All three of these runners are former first round picks and were once dominant running backs leading teams to fantasy championships.

If we operate under the idea that the NFL draft is an efficient market and no organization can consistently generate better returns than the league-wide average, we can make a logical assumption that the earlier a running back is taken, the better player he may be.

To do so, I compiled a data set of 224 running backs that were drafted in rounds one through seven from 2000 to 2014. To qualify, a ball carrier must have averaged at least one carry per game in his respective career.

Below is a plot of the median fantasy points scored for each individual draft round. Because the average is more sensitive to fluctuations in the data than the median, we'll use it as a better representation of round-by-round production.

All fantasy scoring is points per reception (PPR). 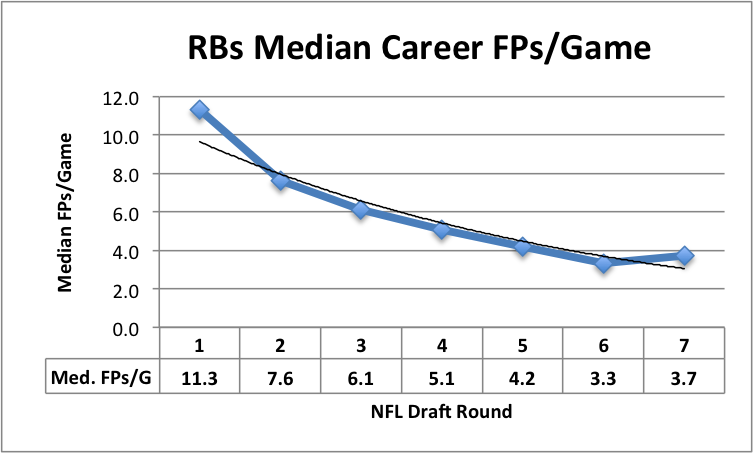 With a correlation of -0.91, we see a strong negative trend between draft round and fantasy points scored. So, while it's fun to bash the Browns for drafting Trent Richardson third overall and the Colts for trading a future first rounder for his "services" -- just from a fantasy football sense, the NFL is actually a pretty efficient market.

Granted -- running backs do bust in both a fantasy and NFL sense -- and no team has actually proven to draft running backs better than the league-wide average. Because of this, we can make three logical conclusions.

1. The Majority of Fantasy-Relevant Backs Were Drafted Early

Taking it one step further, 24 running backs have averaged at least 14 PPR points per game in their respective careers, which is low-end RB1 output on the norm. 45.8% of those backs were taken in round one alone -- with another 33.3% being taken in the second.

Just one of the 24 running backs were taken in round four, meaning no back drafted in round five, six, or seven has gone on to become a career RB1.

That's not to say those backs taken in the last three rounds are never fantasy relevant. Alfred Morris was drafted in the sixth round in 2012 and went on to finish as the RB10 in per-game output in his rookie season. He's subsequently ended up as the PPR RB32 (mid-RB3) and RB23 (low-RB2) in his last two seasons. Yet, as we'll see below, the cards are exponentially stacked against late-round ball carriers.

2. It's Hard For Sixth- and Seventh-Rounders to Stay In the League

So, if a back is drafted in the last two rounds, makes the team, and sees the field, his shelf-life on average is a mere 2.27 seasons. That's incredible turnover for just one position.

3. Using Draft Capital As a Predictive Value Will Have Its Failures

Of course, Wilson was once a first-round pick whose career was cut short due to injury, but he's still a solid reminder of the variability of the running back position itself. Sometimes backs who are drafted early leave the NFL quickly due to injury or are booted from the league due to sheer ineffectiveness.

Felix Jones, Ron Dayne, T.J. Duckett, and Trung Candidate are just some of the names who were drafted in the first round and averaged less than RB3-level output (8.5 PPR points) in their respective careers. Meaning, yes, the NFL will get it wrong drafting running backs early. As we've noted, trusting organizations to always nail their draft picks is foolish.

But, just as a general model, draft capital is a pretty solid predictor of future fantasy production. Though, keep in mind running back careers have a great deal of variance by nature and are still incredibly hard to forecast with any accuracy.

Still, the numbers above bode pretty well for the two running backs taken in the first round this year, Todd Gurley and Melvin Gordon. As shown, first and second round running backs see more opportunity than late-round picks. Opportunity and draft capital are requisite for scoring fantasy points.

Is NFL Draft Round Indicative of Fantasy Football Production for Wide Receivers?