NBA Betting Guide for Monday 10/25/21: Will the Nuggets Cover a Heavy Spread?

Tyler Buecher  —  @TylerBuecher May 11th, 2015
Share on Facebook Share on Twitter
Atlanta's fourth-round pick Justin Hardy has the skillset to come in right away and become the slot receiver Atlanta's been missing for years.

You walk in and your eyes are immediately drawn to it.

Suspended against the wall, illuminating part of the store with its vivid 1080p resolution is the TV you've been saving up for. Displaying a bald eagle snapping a salmon out of the water, that TV mesmerizes you. You get lost in the picture, and by the time the salesman walks up to you, you're already pulling out your wallet.

When you get to the checkout line and you're finally paying, you're prompted with a question.

"Would you like to purchase a three-year warranty for this?"

You look down at your two four-year old sons running around thinking, soon these guys will be sending things flying around the house and you know. You just know you'll regret it when your big investment is knocked off its stand by a soccer ball. You'll know that you'll have wished you had taken this simple warranty precaution for your investment.

When NFL teams are investing in a brand new franchise-altering quarterback, they too, have shown a tendency to take that precaution on their big investment. These teams often double down on their quarterback picks by providing some additional help in their subsequent pick. This secondary pick is sometimes a blue-chip offensive lineman, capable of stepping in day one and helping protect his blindside.

It could also be an offensive weapon with the hope that the quarterback can grow and develop that early chemistry with that player for the foreseeable future.

The Colts did it with Andrew Luck supplying him his college roommate tight end Coby Fleener, to keep their Stanford rapport going in the NFL as his checkdown security blanket.

The Jaguars helped Blake Bortles by giving him two talented receivers in the second round with both Marqise Lee and Allen Robinson.

Even this past week the Buccaneers gave Jameis Winston a bookend tackle in Donovan Smith while the Titans provided Marcus Mariota a big, downfield weapon in Dorial Green-Beckham.

The 2008 NFL Draft was no different. After taking their franchise quarterback Matt Ryan with the third overall pick, the Atlanta Falcons selected his complementary piece in left tackle Sam Baker. But Atlanta's newly acquired general manager Thomas Dimitroff went one step further by providing his new signal caller Louisville's Harry Douglas in the third round.

Unfortunately, Douglas never became that go-to receiver that the Atlanta brass had hoped he would evolve into. In fact, outside of one outlier year in 2013 -- when teammates Julio Jones and Roddy White missed a combined 14 games -- Douglas was rarely utilized as a receiver in Atlanta.

Excluding the 2009 season in which Douglas missed the entire season due to a torn ACL, Douglas never really provided Matt Ryan that go-to security blanket during his tenure with Atlanta. He continually had disappointing Reception Net Expected Points (NEP) totals -- Net Expected Points are numberFire's signature statistic that quantifies a player's contribution to his team's scoring output based on how that player performs versus what is expected of him. These numbers can provide a sense of efficiency of just how well a player is performing against his peers.

Here is how Douglas fared with the Falcons.

Posting some undesirable numbers in his Reception NEP and Target NEP as well as his touchdown totals throughout his career, it's safe to say Atlanta made the right decision cutting the 30-year old this offseason. While his 51 receptions last year may look like an improvement outside his 2013 outlier year, Douglas' Reception NEP just barely eked out Riley Cooper's last year for some context.

Atlanta is hoping that this year's fourth-round pick -- East Carolina's Justin Hardy -- can become that slot wide receiver that the Falcons always dreamed Douglas would become but that never fully materialized.

The former ECU walk-on ended up making the most of his four-year career playing for the Pirates. Hardy finished his collegiate career as the NCAA's all-time receptions leader -- a remarkable feat for anyone, especially a walk-on no less. With a whopping 387 receptions over his four-year span at ECU, Hardy helped the ECU passing offense run as he had 30% of the team's passing offense flow through him in his final season.

Hardy was the recipient of a ton of manufactured receptions off screens, bubble screens, slants, curls, and ins, where his intermediate receiving skills were allowed to shine. He does a great job working his way back to the quarterback when the play breaks down, finding the holes in the coverage while providing a target to bail out his quarterback in these situations. These instinctive plays will help Hardy separate from his peers as he gains the trust of his new quarterback at the next level.

After finishing second in the nation with 121 receptions last year trailing only Alabama's Amari Cooper, Hardy made quite the impression at this year's combine. 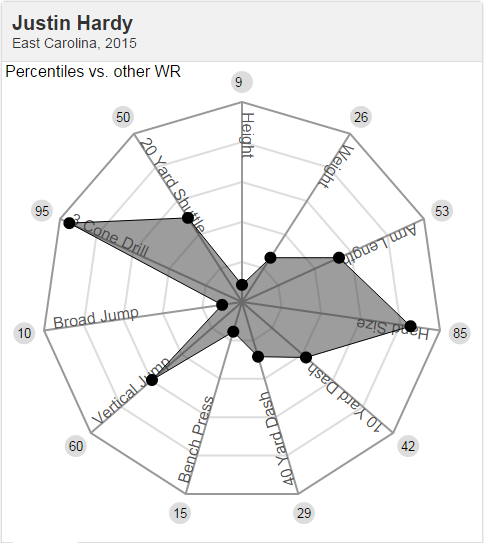 The agile Hardy blew away the competition in the 3-cone drill courtesy of Mockdraftable.com. Fun fact -- Hardy's 3-cone drill time was the fastest among all wide receivers at the combine this year -- a feat that Harry Douglas shared during his 2008 combine as well.

Even more fun is juxtaposing Hardy's combine numbers next to Douglas' to see where they differ.

One thing that immediately stands out is the difference in weight -- something that has been widely talked about this offseason -- and how Hardy comes out on top by a good margin.

Possessing a much larger hand size and vertical jump scores than Douglas, Hardy should be able to come in and help the Atlanta offense right away by working the middle of the field. Hardy has shown an ability to climb the ladder, displaying his impressive vertical prowess even for a "smaller" receiver which should help Matt Ryan in a plethora of ways.

How Hardy will Fit in Atlanta

Justin Hardy enters a fast-paced offense with new offensive coordinator Kyle Shanahan running the show in which the entire Atlanta offense could see a big uptick in production in 2015. In fact, our own Joe Juan opined that Julio Jones may be in store for his best season ever as Julio enters his age-26 season and Shanahan's heavy use of the "X" receiver.

While Shanahan's offense notoriously showcases the number-one wide receiver, Justin Hardy will still be able to cut out a role for this team on a shallow depth chart. When analyzing the new coaching changes for the Falcons, Joe Redemann asserted that Shanahan may have Matt Ryan use more high-percentage short passes while implementing his West Coast offense.

These short passes could also find their way to Hardy, an area in which he capitalized on heavily in college. Working the middle of the field, Hardy should be peppered with targets consistently as he's working against nickel corners and possibly even more if mismatched with a safety or linebacker trying to keep up with new, agile Falcon.

Even after bringing in two new tight ends this offseason in Tony Moeaki and Jacob Tamme, Atlanta still misses Tony Gonzalez and his routine 70-plus receptions and what they did for this offense. During the five-year overlap Gonzalez had with Harry Douglas, Gonzalez stole many of the intermediate routes, subsequently handicapping the value of Douglas in Atlanta's offense.

It is this lack of a soon to be Hall-of-Famer that gives Hardy a much higher floor in his rookie season than Douglas ever had in Atlanta. While injuries are something all teams must endure, Roddy White's and Julio Jones' health history being less than pristine may open the door even further for the young rookie to make an imprint in his 2015 debut.

Justin Hardy may not be the fastest or the biggest receiver out on the field, but he enters an opportunistic situation in Atlanta that could pay immediate dividends for the agile, productive slot receiver.