Could Rob Housler Be a Breakout Tight End in 2015?

One of my favorite things about Twitter during NFL season is the #FreePlayerX movement. There are always numerous situations in which a talented player is being buried on the depth chart, and we in the fantasy football community just cannot accept a coachâ€™s stubborn unwillingness to play our guy.

For the longest time it was #FreeTravisKelce. And while Kelce was somewhat â€œfreedâ€ last season in Kansas City, he still has not reached his potential ceiling in terms of his talent.

Iâ€™ve always had a soft spot for Marcel Reece and his inexplicable lack of involvement in the Oakland offense over the last few seasons, so, Iâ€™ll just leave this here: #FreeMarcelReece.

But another tight end who possesses massive athletic ability, and who has yet to be put in an offense that focuses on him, is now looking for a new home, most recently with the Cleveland Browns.

Thereâ€™s no denying that Rob Housler is a physical marvel. Itâ€™s extremely rare for a 6â€™5â€, 240-pound athlete to run a 4.55 40-yard dash and display his type of speed and burst scores. His mockdraftable.com spider chart, shown below, is what NFL scouting departments dream about. 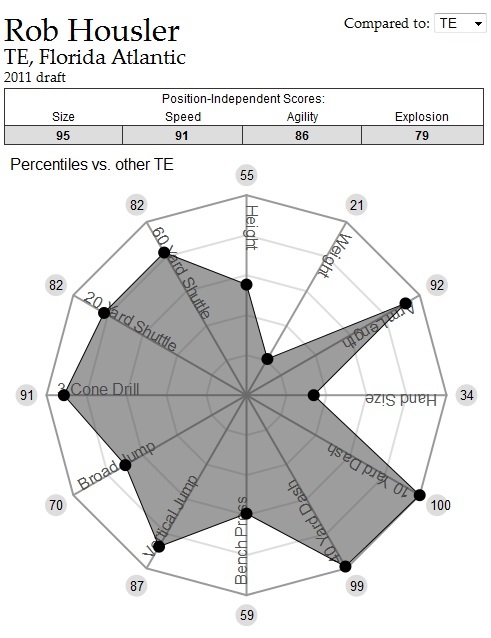 His upside was enough for the Arizona Cardinals to invest a third-round draft pick on the Florida Atlantic alum. The Cardinals then proceeded to acquire both John Carlson and Troy Niklas, essentially pushing Housler out the door.

Despite finishing third and fourth in team receptions in 2012 and 2013, respectively, he was phased out of the offense last season, securing just nine catches. And as our own Joe Redemann described last August, tight ends in Bruce Arians' offenses are not exactly a top priority when it comes to the passing attack.

Was his current unemployment prompted by Arizonaâ€™s scheme, or was it due to his ineffective play?

Our metrics here at numberFire will help us get a better idea.

As we have seen in previous cases, raw, physical talent offers no guarantee of on-field success in the NFL. (Stephen Hill, Iâ€™m looking at you.) Application of said talent needs to happen.

Listed below are Houslerâ€™s Net Expected Points (NEP) metrics for his first four seasons. NEP is a measure of how effective a playerâ€™s performance was in terms of real-life points added or subtracted from a teamâ€™s total. Also listed are Houslerâ€™s Reception NEP per target, which gives an even more refined look and true efficiency.

To give some perspective on these numbers and where he ranked among tight ends with similar usage, Housler's best season in terms of Reception NEP per target was in 2013 when he finished 9th among 13 tight ends with between 50 and 70 targets.

Every season, he has ended up near the middle of the pack in terms of effectiveness.

It can be frustrating as a fantasy owner or as a fan of football in general when a naturally gifted athlete simply does not translate his skills into production. But just because a player such as Housler did not reach top-tier status in Arizona doesnâ€™t necessarily banish him to the garbage can of former combine killers.

Depending on his eventual landing spot, thereâ€™s still a decent chance that Housler could become an integral part of an NFL offense in 2015. At age 27, he may be on the down side of the â€œage apex" for tight ends, but he is by no means an ancient relic.

On paper, Cleveland looks like an excellent spot for Housler thanks to Jordan Cameronâ€™s exit (who is ironically Houslerâ€™s closest measurable comparison), the uncertainty swirling around Josh Gordon, and the relative lack of talent and depth on the current Brownsâ€™ roster at the pass-catching positions.

But the quarterback position, ultimately responsible for Houslerâ€™s opportunities, is unsettled at best.

Of all the other teams that have recently hosted the free agent tight end (Atlanta, Baltimore, and Cincinnati), all offer similar positional opportunity, as well as improved quarterback situations.

My hope is that Housler goes to a team that understands his physical ability, and in turn, use him in a fashion that highlights his natural athleticism in a â€œmove-TEâ€ role, similar to Jimmy Graham and the aforementioned Cameron.

His past inefficiency is certainly worrisome, but I believe thereâ€™s still hope for the #FreeRobHousler movement to find vindication eventually.

Jordan Cameron Is Taking His Talents to South Beach: What Does This Mean for the Dolphins' Offense?