Why Adding Reggie Bush Was Smart for San Francisco

If the NFL is a card game, then the general managers are currently playing 52 pick up with the league's running backs.

LeSean McCoy is a Buffalo Bill, Frank Gore is an Indianapolis Colt, DeMarco Murray and Ryan Mathews are both Philadelphia Eagles, Darren McFadden is a Dallas Cowboy, and now Reggie Bush is a San Francisco 49er.

After deeming the 31-year-old Frank Gore too old to sign to the multi-year contract he was seeking, the 49ers continued their youth movement on Saturday by signing the spry, 30-year-old Reggie Bush. All joking aside, a look at their career numbers has many wondering why GM Trent Baalke and the front office made this decision, and initially suggests a lateral move for the 49ers at the running back position.

Below is a snapshot of an average season from Gore and Bush, all in terms of our signature Net Expected Points (NEP) metric. To learn more about NEP, check out our glossary.

Over their careers, Bush has not proven himself to be a better, more effective ball-carrier than Gore. While Gore had been trending downward in rushing efficiency as measured by our Rushing NEP metric (12.00 in 2012 to -17.29 in 2013 and -14.84 in 2014), Bush himself has averaged nearly identical Rushing NEP stats on average to Gore on 100 fewer carries each season. Bush has also not shown he can shoulder the majority of the workload for a team -- his rushing volume peaked in 2012 when he ran the ball a career-high 227 times (good for -9.47 Rushing NEP). Nor has Bush demonstrated a knack for finding the end zone, scoring only 53 total touchdowns in his nine-year NFL career.

So why on earth did the 49ers make this move?

Because they don't plan to use Bush for any of these things.

All indications are that the 49ers plan to anoint Carlos Hyde as the workhorse of the backfield. With Hyde's skill set being nearly identical to Gore's, it made sense then for the 49ers to find an appropriate change-of-pace back to run alongside their second-year running back.

To understand this move, we have to first look at the player under center for the 49ers, Colin Kaepernick. After trade rumors that Kaepernick may be a part of the 49ers fire sale this past week, this move suggests a change of heart and vote of confidence from the front office for their young star quarterback.

In 2012, Kaepernick's best season as a 49er from both a statistical (57.04 Total Net Expected Points (NEP) in just 11 starts) and team standpoint (the 49ers would lose to the Ravens in the Super Bowl this same season), a look at Kap's pass distribution that year reveals that he did most of his damage targeting players in the short game. Indeed, during this season, 52% of Kaepernicks pass attempts flew between 1 and 10 yards beyond the line of scrimmage. 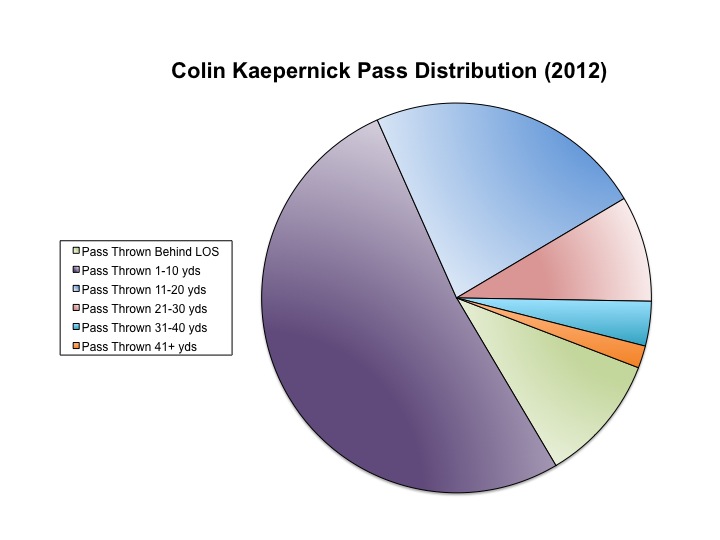 After a disappointing 8-8 record in 2014, this move signals a recognition by the coaching staff for a need to shift the offense back to these principles, focusing on the short game that perhaps not coincidentally helped the Patriots defeat their bitter division rivals, the Seattle Seahawks, in the Super Bowl.

While Reggie Bush has left much to be desired from an overall talent stand point, it's this exact short game where Bush excels at and provides value over Gore. A look at his career averages according to pass distribution reveals that nearly half of all of Bush's yards have come from passes within ten yards of the line of scrimmage. 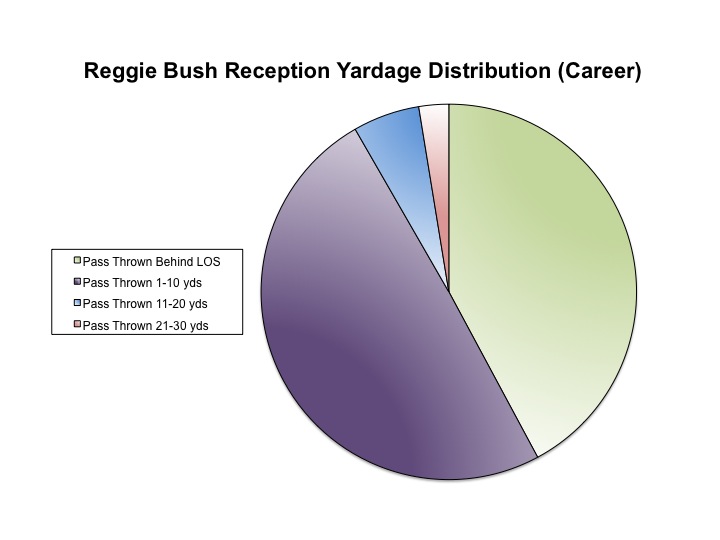 Bush's proficiency in the short field game is what motivated the New England Patriots to pursue him earlier this week to fill the role vacated by Shane Vereen.

Now Reggie Bush finds himself in San Francisco to do what he does best and give Kaepernick a weapon in an area where he has historically been most effective. If he can complement Hyde in the backfield by providing Kap a solid outlet valve, Bush may bring to the table the exact skill set San Francisco needs to contend in the stacked NFC West.