The Writing on the Wall: DeMarco Murray Is a Philadelphia Eagle

Fun fact: When hermit crabs move onto a new and larger shell, a group of hermit crabs will gather and form a queue according to size. Then each hermit crab will vacate its current shell and move up one shell size. In this way, hermit crabs trade up by valuing what others have discarded.

This week Iâ€™ve learned the NFL is a lot like hermit crabs.

So how did we get here and what can the Cowboys and Eagles expect following this big coup?

Coming out of college, DeMarco Murray displayed an elite level of athleticism with a rare mix of size, speed, and power. According to my own PACE metrics, which grades a playerâ€™s performance at the combine relative to his size and build, Murrayâ€™s numbers from 2011 currently ranks him in the top ninth percentile among all 1,092 qualifying running backs and wide receivers from the past 16 seasons (2000-2015), and in the top eighth percentile among all 452 qualifying running backs during this same time span.

This rare combination of size and athleticism was enough to convince the Cowboys to select Murray in the third round of the 2011 draft, and the physical tools he flashed at the combine have been instrumental to his on-field success in the NFL ever since. Despite some injury-shortened seasons, the Cowboys have enjoyed two Pro Bowls, one first team All-Pro selection, and an AP NFL Offensive Player of the Year award out of their young running back.

But alas, all good things must come to an end. Despite Murrayâ€™s successful tenure as the Cowboyâ€™s lead back, which culminated in his best season last year, the impending free agency of All-Pro wide receiver Dez Bryant forced Dallasâ€™ hand. In a prudent move that Iâ€™ve expressed my support for previously, the Cowboys chose to reserve their cap space for their rising star wideout over their spectacular, but oft-injured running back. By letting DeMarco test the market, the Eagles were able to swoop in on the opportunity and outbid the Cowboys for the young running back's services.

Hell hath no fury like a running back scorned.

Many are speculating that Murray agreed to join an already crowded backfield in Philadelphia in exchange for the chance to face the Cowboys twice a year. And in return, the Eagles secured another elite, rare three-down back to replace the one they traded away last week. Tracking Murrayâ€™s performance according to traditional as well as our advanced Net Expected Points (NEP) metrics, it's evident that he has a knack for moving the chains both on the ground and through the air. 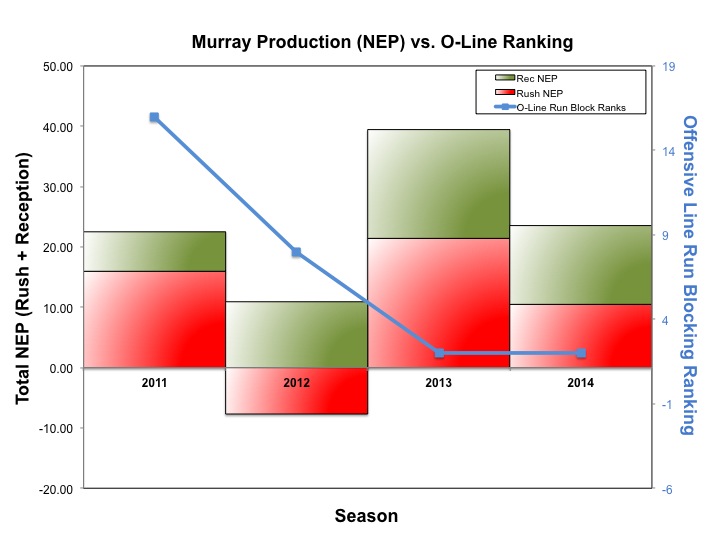 While a lot of Murrayâ€™s success has been attributed to his offensive line, whatâ€™s interesting to note from these statistics is that Murrayâ€™s second-best rushing season actually came during his rookie year, when Dallas' offensive line was ranked near the bottom-half of the league. This suggests that, while Murray certainly benefitted from running behind one of the leagueâ€™s best run blocking units, his athletic prowess and skill set described previously has had as much to do with his success as the big uglies in front of him.

However, if we are being thorough and objective in our analysis of DeMarco, we must also address his shortcomings. While Murray can certainly produce out of the backfield with his hands and his feet, one area of his game that still needs work is his pass blocking. Last season, on 77 pass plays in which Murray was asked to pass block, he allowed three sacks and six quarterback hurries. The upside is that Murray is still fairly young and has the time and prerequisite size and strength needed to continue making great strides in this department.

In addition, Murray has never been able to shake his "injury-prone" label. This is rightfully so, as last year was the first of his career when he was able to play a full 16-game season. His 2011 season ended in a fractured ankle. In 2012, he missed six games due to a sprained foot. And in 2013 Murray missed several games due to a sprained MCL. Even last season, despite playing all 16 games, Murray did so while sporting a cast to protect the hand he broke in week 15. When we view Murray in this light, durability concerns may be at the heart of why Dallas was so hesitant to commit significant cap space to re-sign Murray.

In total, while the Murray signing is not without its risks, the positives still outweigh the negatives and the Eagles have acquired the services of a very good veteran running back. But this still leads us to wonder: Just how good is DeMarco Murray? Specifically, how well does he stack up against the rest of the league's lead running backs (and especially Shady McCoy)?

Best in the League?

Over the last four years -- the four years DeMarco Murray has been in the NFL -- 22 running backs have totaled 500 or more carries. And over this time span, Murray has played a valuable role on the Cowboys offense, as he ranks in the top six in Rushing Net Expected Points amongst these 22 players.

When measured by our advanced metrics, we see that Murray can hold his own as he ranks near the top of the league alongside names like Adrian Peterson, Marshawn Lynch, and Jamaal Charles.

But what's most impressive about Murray can't be found in the table above. Using a metric called Success Rate (which looks at the percentage of runs that contribute positively towards a player's NEP), since Murray has been in the league, no high-volume back has had more success with each carry.

In this metric, Murray edges out even LeSean McCoy, which is a testament to Murrayâ€™s consistency on the ground.

However, it isn't all roses for Murray, as there's also a receiving side to all of this. In terms of Reception NEP, Murray gets dinged versus players like LeSean McCoy (or even Darren Sproles). Among the same 22 backs in our 500-plus carry sample, despite ranking fourth in total receptions, Murray ranks just 11th in Reception NEP, which is far behind LeSean McCoy (fifth on the list).

Even when we compare Murray to his backfield teammate, Darren Sproles, it's clear that he's the inferior third-down option on the team. 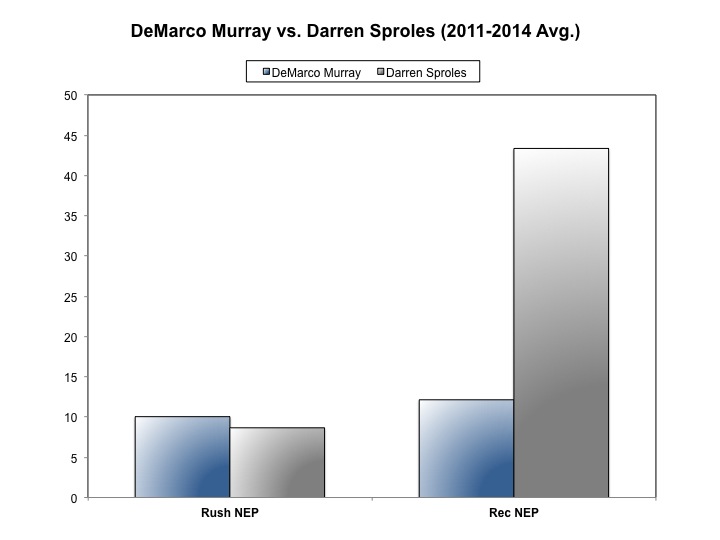 While his four-year averages rank Murray ahead of Sproles in Rushing NEP, he ranks well behind Sproles in the Reception NEP department. Thus, despite his superior all-around talents, the likelihood of DeMarco losing passing down snaps to his backfield teammate remains very high.

But altogether, we see that Murrayâ€™s on-field performance in his first four seasons in the league places him in quite elite company. From this analysis, a strong argument can be made that Murray belongs in the same conversation as other franchise running backs including Charles, Peterson, Lynch, Bell, and McCoy. It also explains why the Eagles were willing to entertain the thoughts of signing Murray even after agreeing to sign Ryan Mathews just days earlier.

A Tale of Two Cities

On the Cowboys side, Murrayâ€™s departure leaves a void on the roster that will not be easy to fill. But with a strong rookie running back class of 2015, itâ€™s more than likely that the Cowboys have found a bigger, younger shell on their radar. Indeed, a few candidates have emerged as potential heirs to Murrayâ€™s throne, including my top running back prospect, Melvin Gordon.

On the Eagles side, theyâ€™ve done an admirable job of filling the hole left by their trade to acquire linebacker Kiko Alonso. When we do a head-to-head comparison of Shady versus DeMarco last season using our advanced NEP metrics, one can make the argument that the Eagles have upgraded their running back position. 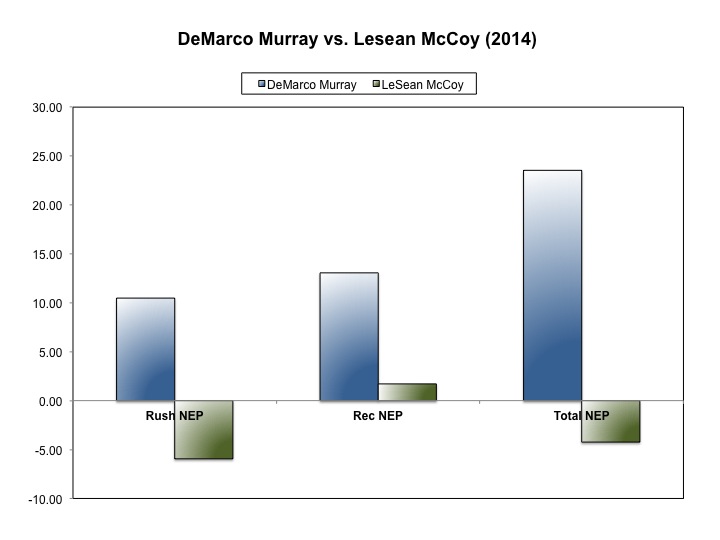 While Iâ€™ve done analysis on a global scale regarding running back performance versus offensive line rankings, the direct comparison of McCoy to Murray warrants reiterating here. Whereas McCoy and Murray both ran behind a top-five run blocking unit last season (ranking first and second in the league, respectively, per Pro Football Focus), Murray was far more productive with his touches and opportunities than McCoy. This again goes back to Murrayâ€™s consistency as measured by Success Rate that I alluded to earlier.

DeMarco finds himself in another run-friendly offense. In his two seasons in the NFL, Chip Kelly has employed a low pass-to-run ratio (6th lowest and 12th lowest in the league over the last two years, respectively). Playing in Kellyâ€™s uptempo offense alongside former Sooners teammate Sam Bradford, coupled with his all-around game will mean that Murray will see considerable time on the field and more than his fair share of the workload with his new team in 2015. If he can stay healthy, of course.

After losing out on the aging Frank Gore, it looks like the Eagles have bounced back by acquiring a running back that will fit seamlessly into their system.

What Does the Acquistion of Jeremy Maclin Mean for the Kansas City Chiefs?