Joseph Juan  —  @FF_Scientist Mar 13th, 2015
Share on Facebook Share on Twitter
Playing with a Chip on his shoulder, can Sam Bradford take advantage of the opportunity in front of him to produce for his owners in 2015?

This offseason, we learned three things for certain about Chip Kelly and the Philadelphia Eagles' offense.

1. Chip wants to run an even faster, more uptempo offense than the one he's had in Philly the past two seasons.
2. In Chip's eyes (and despite what he had told the media) Nick Foles was not his guy to get that job done.
3. Chip had been eyeing a former Heisman Trophy winner with extensive collegiate experience in running a fast-paced, no-huddle offense to take over the reins of his offense.

And we were all right. Except for one minor detail. That Heisman Trophy winner Chip was watching wasn't Marcus Mariota but instead Sam Bradford.

On the surface, many may wonder the wisdom of such a move. On paper, Foles has been much more productive than to Bradford. Surely this can't be Chip Kelly's true end-game, can it?

Taking a look at the head-to-head numbers between Foles and Bradford, one might argue that the Eagles are in store for a down year on offense.

Foles has outproduced Bradford in every statistic on a per-game basis in nearly every traditional and advanced (that is, Net Expected Points (NEP)) metric available.

However, one can argue that the boost in Foles value was due in large part to the installation of Chip Kellyâ€™s offense in Philadelphia. Indeed, if we compare the production of Foles in his rookie season (prior to Chip's joining the Eagles), with that of Bradford during his rookie season, we see that the two put up comparable production on a fantasy points points per game and NEP basis. 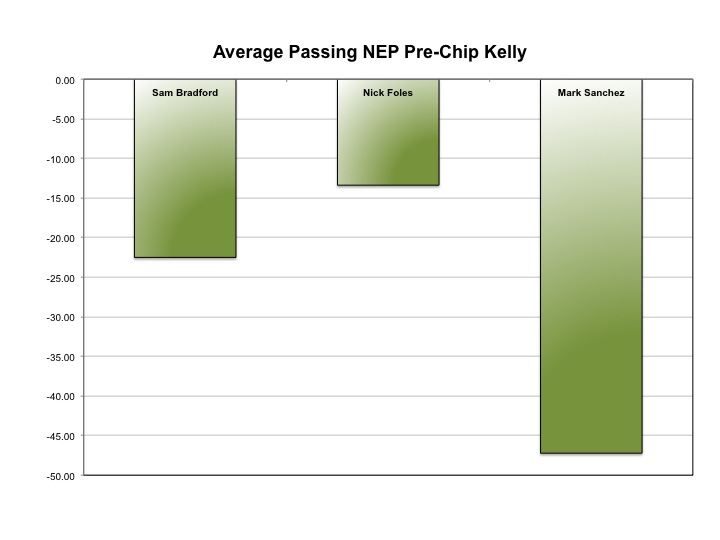 All things being equal, Foles and Bradford seem to be equivalent talents, right? But therein lies the rub. Everything is not equal. A look at the supporting casts for Bradford and Foles during their rookie seasons shows us the huge disparity in talent surrounding these two rookie quarterbacks.

It's clear that Bradford did more than Foles with far, far less.

Some may ask whether Bradford peaked that rookie season or whether he had a great showing his first year in the league (which led to an AP NFL Rookie of the Year Award, by the way), but has since fallen off.

Taking a look at his career over the years suggests this isn't the case either. Another encouraging sign from Bradford in regards to his development as an NFL quarterback was the large jump he made in terms of production as measured by Passing NEP between 2011 to 2012. Indeed, consistent with this trend, Bradford was averaging a career-high 17.1 fantasy points per game in 2013 before going down to an ACL tear in Week 7. 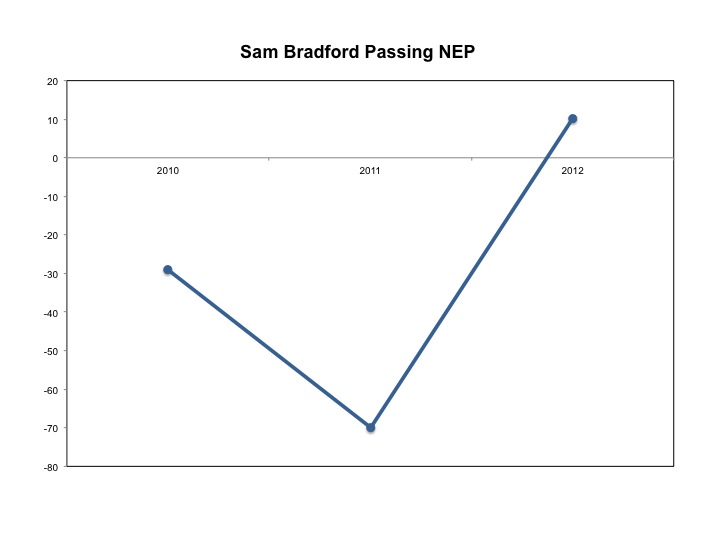 Also, coming out of college, both Bradford and Foles were noted for their pocket awareness, arm strength, and size, but Bradford was also touted for his accuracy in accuracy and decision making, two key elements necessary to run a Chip Kelly offense. Bradford completed 67.6 percent of his 893 attempts in college and boasted a 9.4 yards per attempt average while throwing only 8 interceptions. Foles wasn't too far behind in completion percentage (66.8 percent) on his 1,404 passes, but his yards per attempt average was only 7.2, and he threw 33 interceptions in four seasons.

These encouraging accuracy attributes in Bradford more than likely played a large part in Chip's move to acquire the former Rams quarterback.

With Bradford's potential clearly laid out, the question remains whether or not he will finally be able to take advantage of the opportunity in front of him and translate his natural talents into real world (i.e., fantasy football) production.

During Sam Bradford's last season in St. Louis, he was forced to throw to names such as Austin Pettis, Stedman Bailey, and Chris Givens. Beyond this, the lack of any semblance of a running game meant an incessant pass rush from opposing defenses. With these "weapons" at his disposal, coupled with an offensive line constantly ranked near the bottom of the league and an uninspiring offensive coordinator, it is no wonder that Bradford has yet to emerge as an elite quarterback.

"Don't Bring a Knife to a Gunfight"

If the Rams were a cutlery shop, then the Eagles are an army surplus supply store. Even after losing Jeremy Maclin to the Chiefs, the roster is still full of weapons for Bradford to go to. With the recent signing of his former Sooners teammate DeMarco Murray to the Eagles and the presence of veteran pass catching extraordinaire Darren Sproles, and talented but oft-injured Ryan Mathews, Bradford not only has very capable receivers out of the backfield that can serve as safety valves for him on well-covered plays but also has a running game that will keep opposing defenses honest on the pass rush.

In his seven games as a Ram in 2013, Bradford targeted his tight ends nearly 10 times per game out of 38 attempts (26.3% ). In Philadelphia, Bradford has two very good pass catching tight end targets in Zach Ertz and Brent Celek, who combined for a Reception NEP of 84.00 in 2014. To iterate further the productivity of these big targets for Bradford, Ertz's Reception NEP of 63.70 actually ranked him ninth amongst all tight ends last season.

Finally, Bradford has rising star Jordan Matthews anchoring the wideout position for him. As a rookie, Matthews amassed a total of 67 catches for 872 yards and 8 touchdowns on 103 targets, good for a Reception NEP of 78.90 (ranking him 30th amongst all wideouts). A big receiver (6'3") with 4.46 40-yard speed whose Combine perfomances rank him amongst players such as A.J. Green and Dez Bryant according to my own PACE metrics, Matthews will provide big play making ability on the outside for Bradford.

During Bradfordâ€™s five year career Bradford has missed a total of 31 out of a potential 80 games (38.8%), leading many to call Bradford injury-prone. But is this a fair label? If we take a close look at the play of his offensive line during his first four seasons in the NFL, its clear that this unit deserves a large portion of the blame for Bradfordâ€™s injury woes.

From 2010-2013 the Rams offensive line perennially ranked in the bottom-third in the league in pass blocking, run blocking, and overall ranking. In 2011 alone, the Rams offensive line gave up a mind-boggling 55 sacks and 114 quarterback hits, meaning on average Bradford was getting hammered by a 300-plus pound defensive lineman 10.6 times per game (or once every four drop backs). One may argue that playing behind that offensive line would be a ticking time bomb of injury for any quarterback and that no signal caller could have reasonably stayed healthy with the same amount of punishment Bradford absorbed.

But now Bradford finds himself on an Eagles squad that has on average under Chip Kelly ranked 14th, first, and first in pass blocking, rush blocking, and overall blocking, respectively. This bodes well for his prospects of both remaining upright and healthy throughout the upcoming season, as well as his chances of having sufficient time to complete passes downfield.

The Wizard of Offense

As a Ram, Bradfordâ€™s productivity was handcuffed by the play calling of offensive coordinator Brian Shottenheimer. Oftentimes called conservative and uninventive, Shottenheimerâ€™s play calling has generated offenses ranking 21st, 20th, and 28th in according to our metrics during his tenure with the Rams.

Bradford now moves on from his situation in St. Louis and into the dynamic and fast-paced system of Eagles head coach Chip Kelly. To visualize the boost Kellyâ€™s system gives to the quarterback position, letâ€™s take a look at the Passing NEP values for Nick Foles and Mark Sanchez pre- and post-Chip Kelly. 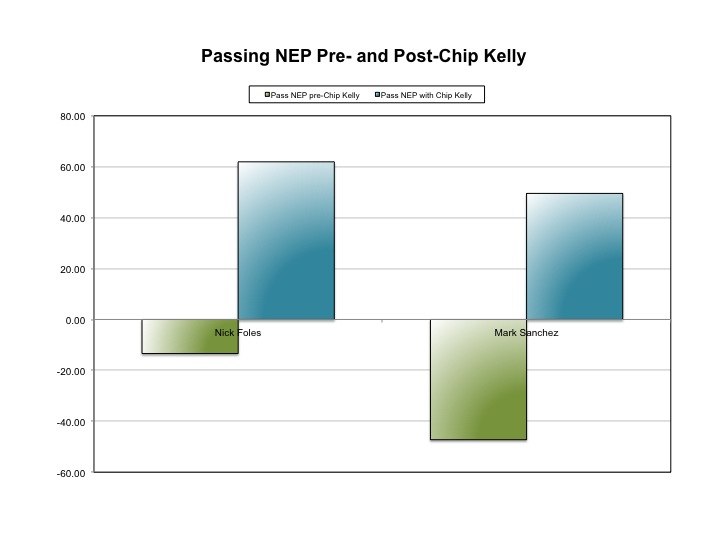 Itâ€™s clear that Kellyâ€™s offensive scheme can work wonders for the quarterback position, taking Foles and Sanchez from negative NEP values over the course of their careers, to NEP values that rank them in the top half of the league at the position.

Many will wonder whether Bradford can run the fast-paced, uptempo offense that Chip Kelly employs with the Eagles. A look back at Bradfordâ€™s plays-per-game averages during his two full seasons as the starting quarterback for the Oklahoma Sooners should dissuade any of these concerns.

Statistics are courtesy of TeamRankings.com

The Sooners ran an uptempo offense with a pacing comparable to that of Chip Kellyâ€™s in Oregon. Indeed, under Bradford the Sooners averaged 75.1 plays per game (including 79.5 plays-per-game during his 2008 Heisman Trophy winning season) versus 76.7 plays per game for Chip Kellyâ€™s Ducks. Kevin Wilson, the then-offensive coordinator for the Sooners described Bradford as "...the point guard who was distributing," and said that "he was very instinctive, very good mind." This is quite encouraging as many, including Chip Kelly himself, has likened the role of the quarterback in the Eagles system to that of a point guard. It's becoming more and more apparent that Bradford has the skill set required to run the type of offense Kelly has been looking to run in the NFL, something Nick Foles did not have.

Beyond all of this, Bradford also gains an advantage with his reunion with new Eagles offensive coordinator Pat Shurmur, who served as the Rams offensive coordinator back in 2010 when he was named the Offensive Rookie of the Year. Shurmurâ€™s familiarity with Bradford should help him play to his strengths and extract as much value as possible out of the former overall number one draft pick.

Believe it or not, Sam Bradford gives the Eagles a considerable upgrade over Nick Foles from a skillset and talent standpoint. At worst, I expect Bradford to match the per game numbers he generated in 2013 prior to his season-ending ACL tear. However, with the weapons and system in place around him, coupled with his natural talent, I believe Bradford has a chance even to exceed the per game production Foles generated in 2013. Those in the drafts this upcoming August looking for a QB2 with QB1 potential could do worse than draft Bradford in the latter rounds.

If he can take full advantage of his supporting cast and Chip Kellyâ€™s system, Bradford has a rare opportunity to resurrect his career and re-write his own story before itâ€™s all said and done.

The Writing on the Wall: DeMarco Murray Is a Philadelphia Eagle

Ryan Mathews to the Philadelphia Eagles: Can Chip Kelly Salvage His Career?