Everyone has his or her own set of NFL power rankings, but not all of them are computer-driven, algorithmically-derived approaches that look at underlying data to figure out true team strength.

But numberFire's power rankings do just that.

And not every mobile provider is offering you a free chance to play FanDuel's Gridiron Pick Em, but Simple Mobile is.

Kickoff will be here before you know it, so head to FanDuel to make your picks today and skip the contracts with high-speed data, talk, and text on a powerful nationwide network with Simple Mobile! 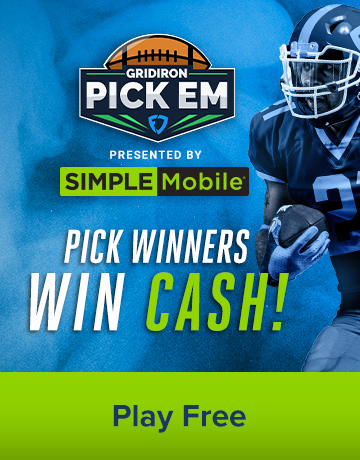 Using our nERD metric, which indicates the expected point differential against an average opponent on a neutral field, here is how our model ranks and rates all 32 teams after 11 weeks.

Taking a step back and looking at the Buffalo Bills' schedule a few weeks ago, we could see that upcoming games were (and still are) going to tell us a lot about them one way or the other. Their 41-15 loss to the Indianapolis Colts was not exactly a ringing endorsement of the Bills, who have largely played weak opponents (none of their 10 opponents are inside the top 11 in our nERD rankings). Buffalo now ranks fourth in nERD. Their playoff odds (86.6%) aren't in jeopardy, but their legitimacy of Super Bowl contenders might be.

A big-time win for the Los Angeles Chargers (41-37 over the Pittsburgh Steelers) was good enough to move their nERD score from 3.68 to 4.13. They have winnable games over their next three: at the Denver Broncos (18th in nERD), at the Cincinnati Bengals (17th), and home against the New York Giants (24th).

The Kansas City Chiefs are trending and now have a 7-4 record. They, like the Colts, were identified in this column a few weeks ago as a team whose schedule opened up in a big way. Their playoff odds are now 92.3%, and back in Week 7, when their record was 3-4, those odds bottomed out at 46.4%. With a bye week upcoming, the Super Bowl runner-up one year ago could continue to get right.

A 40-29 win for the Philadelphia Eagles still has them at a sub-.500 record (5-6), but they rank 5th in the league in spread-adjusted point differential (+6.0). Their playoff odds are 47.9% after the victory after a low-water mark of just 18.6% back in Week 7 when they were 2-5. Matchups with the New York Giants and New York Jets loom, so they have winnable games and could be over .500 within two games.

The Colts were featured here a few weeks ago as a team to watch, and while they're still 14th in nERD, their playoff odds climbed 16.4 percentage points this week. They're still on the outside looking in (44.5%) and will need to take advantage of easy games on the schedule (Houston Texans, Las Vegas Raiders, and Jacksonville Jaguars) while potentially stealing some tough matchups (against the Tampa Bay Buccaneers, Patriots, and Arizona Cardinals).